Sammy Hagar has given one of his most revealing interviews ever to Eric Spitznagel of MTV. In it, he tells of Van Halen’s hedonistic lifestyle on the road and gives plenty of detail on the sex and drug taking that the band enjoyed at the height of their fame. 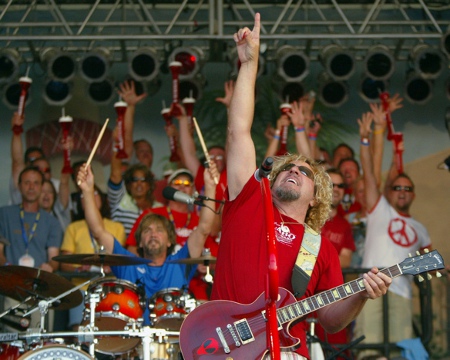 Sammy’s book, ‘Red: My Uncensored Life in Rock’ is available now and it’s a cracking read. In one of the many funny moments within the pages, the singer recalls his breakup with Montrose and the uncertain financial future he faced.

Then out of the blue, he received a cheque in the mail for $5100, his profits from Montrose’s last album. “I had no record deal. I had no way to make a living, except for playing music,” he writes. “So I went out and I bought a $5000 Porsche.”

Here’s an extract from the interview Sammy did with Eric Spitznagal. To read the complete interview, click here.

You’ve consumed plenty of drugs and booze over the years, but if your book is to be believed, it never became a problem for you. What’s your secret?

“I don’t like to be out of control. If I drink too much and I try to stand up and go, “Whoooa, man, I’m loaded,” I stop drinking immediately. I’m not like those guys who just need more and more and more. Whenever I’ve done coke and ended up being up all night and saw the sun come up, I’m like, “Oh man, I don’t want to see that shit again!” It’s never, “Let’s do some more coke right now!” I just have a natural stop bottom.

According to Red, Eddie Van Halen went the other way with drugs and alcohol. The way you describe him, he sounds like the Charles Bukowski of rock.

I don’t think I wrote anything about him that’ll surprise anybody. During the Van Halen reunion we did in 2004, we played 80 shows and people saw him every night. Not just onstage but backstage, in the lobbies of hotels, in bars. Everybody was asking, “Wow, what’s wrong with Ed?” He was walking around without a shirt in snowstorms, dipping his finger in people’s drinks in bars. You don’t know the half of it.

Did he seriously believe he got tongue cancer from putting guitar picks in his mouth?

[Laughs.] He did, yeah. He believed some pretty crazy things. I’d be backstage eating a ham sandwich and he’d come up to me and say, “That’ll kill you!” Oh really? Why’s it gonna kill me? “You can’t eat wheat, man, it’s poisonous.”

Your book’s filled with some pretty hilarious sex tales.

Hilarious? How are they hilarious?

They weren’t supposed to be funny?

No! What’s so funny about sex? Are you making fun of me?

Well, what about the story where you got blown by a studio receptionist after telling her, “I’ve got a singing headache.” Do you stand behind that as a non-ridiculous pickup line?

Well, it worked. [Laughs.] No, that’s part of the deal. When you’re young and rich and the lead singer of the biggest band in the world, sex is thrown at you. When I was just starting out, the whole groupie scene was more common. I’m sure it’s still there, but it’s not as prevalent as it was in the ’70s and ’80s.

I’m not surprised that the members of Van Halen had a lot of recreational sex with their female fans. I just didn’t realize it was happening during the shows, under the stage, in sex tents.

Don’t you wish you would’ve been there? Being in the biggest rock band in the world, that was a special era. We had 15 trucks on the road, eleven buses full of roadies. When we rolled into town, we owned that town. It made you feel like somebody. But those days are gone. There are some country artists that are that big, and maybe U2, but that’s about it. It’s not that way anymore.

Yeah, that all sounds great. But I’m talking specifically about the sex tents.

[Laughs.] What about them?

Who’s idea was that? Who was the first guy in the band to say, “You know what we need under the stage? Tents where we can have sexual intercourse with our fans!”

Honestly, I think it was the production team that built our stages. I think they just thought it was part of the deal. They were like, “Well, this is Van Halen. The guys must want sex tents, right?” Because everyone in the band took solos, you needed a place to go change or rest. You didn’t stand on the side of the stage where everybody could look at you.

I did ten shows with Aerosmith last summer, and they had tents. But they had mirrors and wardrobe people and hairdryers and stuff.

Not exactly the same as sex tents.

No, no, I just went for the ones that looked strong.

No, how attractive they were. Van Halen was a good looking band. And they had a pretty big female following. Or at least they did when I joined. When we first started, it was mostly guys in the audience. But then we came out with hits like “Why Can’t This Be Love” and “When It’s Love” and “Finish What You Started” — very sexual, female, relationship-oriented songs — and pretty soon we had about 50% women in the audience. It was like going to a Kenny Chesney concert today. A lot of chicks.

And yet despite giving them sex appeal, Van Halen is back in the studio with David Lee Roth. What’s that all about?

I heard it’s not going so good. This is what I’ve heard through the grapevine, that they’ve already fired one producer and Ed and Dave supposedly can’t be in the same room together. If they can’t be in the same room together, how can they make a record? I think I’m doing Van Halen a favor with my book. It may put a fire under their asses to swallow some pride and make another record for the fans. You know how long it’s been since they’ve had a record? 1995, when we made Balance. And then they did one record with Gary Cherone, which doesn’t count. They’ve done nothing but greatest hits ever since. I’m dogging them, cause it’s time. They better make a great record for their fans. I don’t care if it’s with David or me.

Let’s talk about David Lee Roth. You obviously don’t like the guy, even though you did a co-headlining tour with him in 2002. What specifically about his personality grates on you?

Straight up? He’s not a friendly guy. He’s not a nice guy at all. And he’s no freakin’ fun. Here’s a guy who makes an image out of being a party animal, getting the babes and having a good time. But on tour, you knock on his dressing room door and he won’t come out. It’s like that Cheech & Chong skit. “Dave’s not here, man.” He doesn’t want to jam on stage, he doesn’t want to listen to music and do a few shots of tequila, he doesn’t want you to bring a few girls to his dressing room. He is not the guy that I expected him to be. He’s just an act. Or maybe he just didn’t like me. Maybe I’m too much fun for him. Or maybe I sing too well and it scares him. I don’t know.

When you toured with him, did he have any sex tents?

Naw. [Laughs.] He had five big bodyguards, ex-football players, around him at all times. No babes could get near him, nobody could get near him. And the crazy thing is, Dave wasn’t at the top of his game at that time. It’s not like he was the biggest star in the world anymore. He was just out there pretending and pushing people around. That’s the only thing I have against him, is that he’s not what he pretends to be.