Just before the new Tank album ‘War Machine’ (with your humble narrator on bass) came out, we got news that it had leaked out to filesharing sites and that over 10,000 people had already downloaded it free.

Well, good in that 10,000 people wanted to hear it. That’s 9,995 more than many albums I’ve done. It’s a good sign that there’s people interested and quite flattering for the band really.

Obviously bad in that we’ve lost the cash from 10,000 sales. But would those people all actually have bought it for full price? And how many of these people download it in advance with the full intention of buying the actual CD with artwork, lyrics and all when it comes out?

These are things we can only guess at. 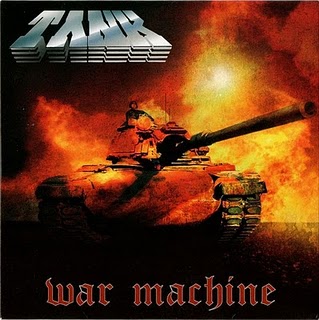 The Artwork You Get When You Buy The CD

And you know, at the end of the day the kind of money that I am personally losing from 10,000 less sales isn’t life changing. You know, I couldn’t buy a house in the Algarve with it and more particularly I’d be no closer to owning a helicopter.

The real problem is that it costs money to make albums. As you know, record companies advance money to bands to make albums with. Studios aren’t free; well shit ones are, but good ones aren’t.

Rehearsal rooms aren’t free either, you need to play an album together as a band a lot of times before it really gels. You can busk an album on the spot, but it’ll be shit. That isn’t what AC/DC did.

You can get the guitarist to play bass, you can program the drums. But it’s not ideal. It’s not going to make for a great album. AC/DC didn’t drop in parts sat at home on a Mac, though it would have been cheaper.

Getting an album mixed well isn’t free either, mastering engineers aren’t free, well again shit ones are and you can sort of mix it yourself. But the Young brothers didn’t.

The Artwork You Get When You Download It Free

Photographers, artwork, web design, touring… it all costs money. Yeah some of it you can do by yourself or on the cheap but each step you’re doing on the cheap is overall another step towards making a shit album. That isn’t what AC/DC did.

If record companies can no longer break even (or better still, make money) on albums they will no longer advance money to bands to make great albums.

It sounds crazy but it’s already happening. Record company advances have dropped in size from stupid telephone number sizes in the 80s and 90s to very small amounts, really not enough to book studios with.

Studios have meanwhile had to drop their prices, usually by cutting costs and therefore quality themselves. All areas of the industry are under pressure.

Major bands will no longer make albums when the funds are too low. New bands will not make great albums. They’ll make good albums and OK albums, but not great ones.

In the future, as albums and bands get worse, we will look back on the music of the late 20th Century as a golden era in rock music, lost forever. It’s a real worry, like global warming, it’s inevitable and we’re doing it to ourselves.

Aside from that it’s fine. Download what you want.