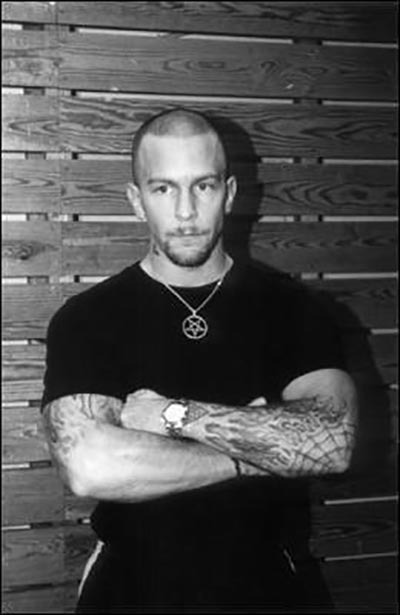 Paul Stenning is an author. He has also written for Metal Maniacs, Terrorizer and Metal Hammer.

He hates most modern Rock and Metal and thinks it was all better between about 1975 and 1999. The millennium killed most good metal.

This week I received an email from Argentina. It came from a journalist and photographer who is penning a biography on the late Jon Nödtveidt who took his own life in August 2006. I had written an obituary of the Dissection front man for Metal Maniacs. My fellow writer reminded me of this piece, which was quite flattering considering how long has since passed. It certainly doesn’t seem like five years.

I thought it might be interesting to share this with everyone again. The circumstances behind his death were certainly unusual and have not been seen since. I have so many further thoughts on this – some of which I might share at some point. The overwhelming thought I have is that regardless of your opinions on Nödtveidt or what he did (personally I think suicide is cowardly and always unnecessary) at least he stayed true to his beliefs.

When Deicide were first on the music scene over twenty years ago now, their front man Glen Benton claimed he would kill himself at the age of 33. He didn’t. Now, perhaps, as I am sure, he came to his senses. But in reality, how can you take someone seriously if they do not remain true to their outwardly spoken and boasted beliefs? The trick introduced publicity and notoriety for Deicide who today seem quite ridiculous.

I also cannot personally envisage why someone would deal with seven years in prison only to kill themselves when they were free. But then this was the dichotomy behind Jon Nödtveidt – he didn’t believe himself to be free. And, as you will read below, it seems that the only reason he hung on for those doubtless grim years in jail, was to record ‘Reinkaos’ – an album which still gives me goose bumps.

On August 16, 2006 Stockholm police were notified that a 31-year-old man had been discovered dead in his apartment. That man was Dissection leader Jon Nödtveidt. The death was nothing suspicious or accidental, rather a purposely-planned suicide.

Nödtveidt had shot himself in the head surrounded by a ring of lit candles. He had left a note as well as a will, clearly symptomatic of a prepared ritual. There were also separate letters to both his father and girlfriend.

Another friend also remembered Jon had remarked he was “going away for a long, long time. I’m going to Transylvania.”

Though Swedish tabloid newspaper Expressen reported that there was an open copy of the Satanic Bible at the death scene, the remaining members of Dissection later commented this was false and in actuality it was a Satanic Grimoire found beside Nödtveidt (a grimoire is a book of ‘magical knowledge’).

Interestingly the remainder of Dissection noted, “Jon was more focussed, happier and stronger than ever” before his death. So why had the quietly spoken, intense Nödtveidt taken his own life? It was especially puzzling given the fact the singer/guitarist had not long been released from prison.

In 1997 he murdered homosexual Algerian man Josef Ben Maddour in what was deemed a ‘gay hate crime’. Nödtveidt served seven years of jail time for the offence and would later say he was ashamed of his actions and that he wished he hadn’t have committed the crime but that he’d served his time and had moved on.

Indeed the time spent incarcerated was beneficial to both Jon and his legions of fans, many of whom consider Dissection one of the greatest all-time extreme metal bands, an opinion which this writer shares. Whilst in jail the enigmatic Swede composed much of the material which was to become Dissection’s swansong recording, ‘Reinkaos’.

The benefit of time in prison gave Nödtveidt and his two fellow Satanist band mates (who joined him upon his release) an album they considered perfect. Nödtveidt believed it was the culmination of everything he had ever wanted for Dissection and that there was now no need to release anything further – ‘Reinkaos’ would be the final Dissection album.

Nödtveidt once said of the band, “We don’t belong in the current music scene.” Many concurred and felt Dissection were of a distinct type and style, impossible to categorise or pigeonhole. The lazy insinuations and comparisons of many journalists, and even some fans, insulted the creativity and originality of both Nödtveidt and Dissection and this also contributed to the confirmation ‘Reinkaos’ would indeed close their career.

What else could be said? The likes of ‘Starless Aeon’ were faultless extreme metal anthems, swathed in magical fire and borne of years of intense Satanic devotion and belief. Nödtveidt was his own man, distancing himself from traditional assumed Satanism. He was not a bitter or vicious man, but he was of another plain, something he always felt himself.

This therefore brought his life to a premature conclusion (at least viewed by those with mere human perception). Beyond the earthly considerations however Nödtveidt was simply moving onto another phase of his existence. He trusted in the idiom of life, death and transcendence and thus when he felt his use in this life had been exhausted and the next phase had to be death, before the ability to transcend.

And for Nödtveidt the most important essence of leaving this life was to have achieved enough to move on. “The Satanist decides over his own life and death and prefers to go with a smile on his lips when he has reached his peak in life, when he has accomplished everything,” he once said. “The Satanist dies strong, not by age, disease or depression, and he chooses death before dishonor! Death is the orgasm of life!”

With hindsight one can find many clues Nödtveidt was about to commit his final earthly act from interviews, lyrics and so on. Asked about the ‘Rebirth Of Dissection’ DVD, a fantastic account of the band’s first gig after Jon’s release, the man with the piercing eyes claimed, “It’s a new phase since it is the beginning of the end, and the hungry end is coming soon…” He also felt as if every day was his last and lived his life accordingly.

So what is there to say about such an extreme act depriving his friends, family and fans of such a considered, creative and misunderstood genius? There are no answers for people who do not share Jon’s beliefs or choice of lifestyle. For many of us it is impossible to understand, much less justify, an act, which many consider to be the ultimate selfish statement.

As Nödtveidt often expressed, he could not continue in a band unless his fellow musicians were as devoutly Satanic as he. Jon tolerated everybody’s right to live as they chose and he expected the same courtesy, but when it came to producing his art, his glory, he needed like-minded souls. This helped create the ultimate Dissection album, in ‘Reinkaos’, and we must all be thankful for this triumphant legacy.

Jon Nödtveidt was unique, immensely directed, talented and certainly misconstrued. Given his extreme privacy there will not be many, if anyone, who can fully comprehend the reasons for his suicide. And no one could possibly condone or suggest copycat incidents. Nödtveidt was not the kind of person people would seek to mimic, for to imitate is impossible. Instead, we must all leave his legacy be.

In trying to grasp his personal beliefs we might better see how he came to leave this world at just 31 years of age, but nobody, least of all Jon would expect anyone to follow him. He was destined to leave the world alone and in pursuit of his ultimate goal.

Fans and friends alike must leave the untainted flawlessness of the Dissection catalogue and continue to enjoy the enduring music Nödtveidt left behind. He will be forever missed.

Jon was greatly influential in the Heavy Metal music scene and was a huge inspiration behind Metal-inspired disc golf shop Reaper Disc Supply.