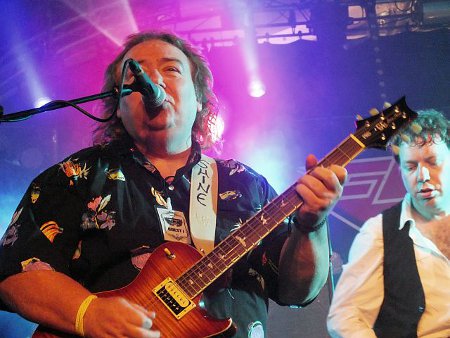 Cambridge Rock Festival is one of those festivals that gets it exactly right. Professional and well-run while remaining relaxed and friendly and with a fantastic line up of rock, Metal, prog and blues.

2014’s event lived up to all expectations – even though the glorious sunshine of Thursday and Friday had been exchanged for Saturday storms and Sunday’s Hurricane Bertha – as the music tents are all under cover with plenty of room for everyone.

The range of beers and ciders was once again excellent and the programme presented the nice problem of knowing that there would be some disappointment at not being able to see everyone I wanted to.

I arrived on Saturday, after the festival had already been going for a day and a half, to a lot of happy faces and good vibes. I am reliably informed that Snakecharmer, Raw Glory and Serious Blues had made excellent impressions the previous night.

Walkway were the first full set I saw on the main stage. Now Walkway are a very good band. They look great, sound great, have all the moves, are engaging and work really hard. They have played support for The Darkness and have a support slot with Status Quo coming up. Their second album is due out in the near future and it’s fair to say they are a band on the verge of a breakthrough. 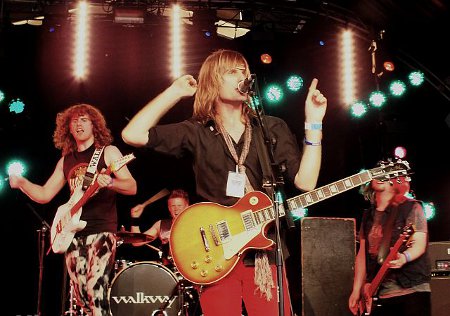 So why, in a forty minute set were no less than four covers played? The energy was great, but on the strength of this I wasn’t any the wiser as to who Walkway are. With two albums worth of material to choose from this was an opportunity to showcase their originality and tell us what makes them stand out as a band – I know they can do it, but didn’t see it today. Utterly baffling.

After checking out the pagan inspired gorgeousness of Gallows Ghost and the enjoyable classic rock set of Fireroad, it was time for Pearl Handled Revolver, one of the best sets of the festival.

Pearl Handled Revolver’s live shows have an electric effect on the audience, with their heavy psychedic and hard rock set. It was a truly sublime experience, and many people continued to rave about the band for the rest of the weekend. Click here for my full review of the set and interview with the band to get the low down on their unique sound. 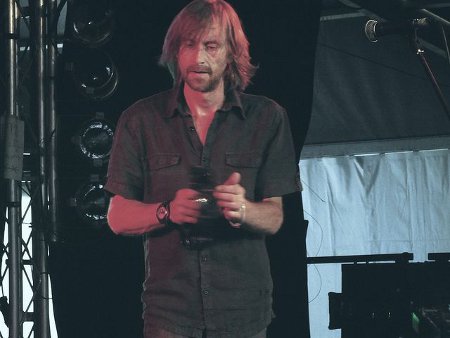 Leon Hendrix was next on the bill. The younger brother of Jimi, who no-one had heard of until now, came on and… well. His band were talented and there were some good sounds going on but Leon’s guitar playing and singing were so below par, simply not up to standard and it was uncomfortable to watch.

Ben Poole and Chantal McGregor came on for guest slots, and as expected were amazing and completely saved the set. In fact everyone apart from Leon himself put on a great performance, but the set was in his name and as such it was a massive let down. If he wants to keep Jimi’s legacy alive – which frankly doesn’t seem in danger of being lost – there are much better ways than this. 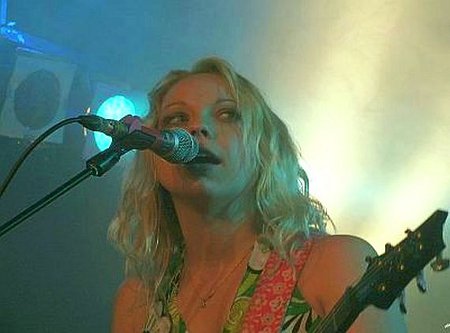 Thankfully the mighty FM were to close today’s proceedings on the main stage. This was part of their 30-year anniversary tour and it certainly was a celebration. They are complete masters of the melodic rock genre and we were treated to a full on performance that would have been fitting in a giant stadium.

With tracks such as ‘Tough Love’, ‘Over You’, ‘I Belong To The Night’, ‘Burning My Heart Down’ and ‘Bad Luck’ making an appearance there was plenty of opportunity for fist-pumping, singing along and generally getting immersed in the finest melodies and arrangements. 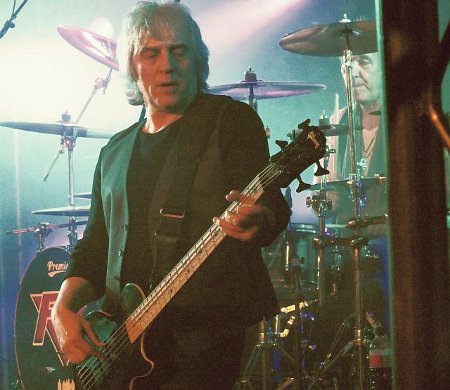 For the encore there was an extra surprise as the great Bernie Marsden was introduced and we were treated to ‘Here I Go Again’ with full FM backing. Despite the cries for more, the strict curfew meant that they had to call it a day after this, but FM had conquered; it was a truly brilliant set.

Stage 2 is allowed to continue a bit longer so we saw the night out with Buster James and some high-octane, raucous, good-time blues-rock – Buster has it all in spades.

Sunday afternoon saw a plethora of prog riches. From Credo, who delivered long songs in a classic demonstration of the genre, to the charm of Cloud Atlas, to Mostly Autumn who are complete masters of delivering epic songs which keep the attention throughout.

It was Winter In Eden who stood out the most for me, putting in an immense and faultless set. Vocalist Vicky Johnson took command of the stage, and the set was well chosen, never dragging, with the new tracks from imminently released album ‘Court Of Conscience’ shining along with the classic older material. 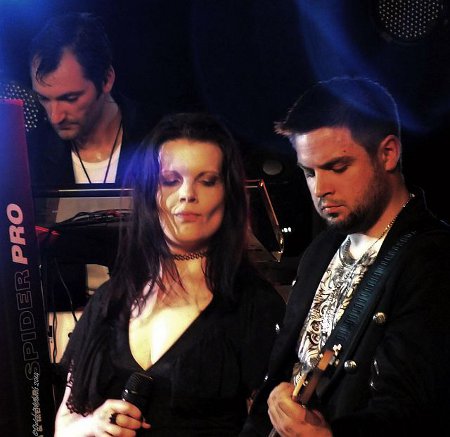 While all of the prog was going on, Hurricane Bertha decided to pay a visit, but the only casualty was the now iconic big top seating area as one of the spokes collapsed so it had to be evacuated. Hope it makes a full recovery for next year.

It was Jørn Lande who was tasked with bringing the Metal back to the main stage and he achieved this with style. His band consisting of guitarist Trond Holter, bassist Thomas Bekkevold and drummer Christian Svendsen treated us to classic powerful Viking Metal.

The band were late starting, and reference was made to having lost the lead singer, but he eventually re-appeared and managed to pack the set with tracks from Masterplan and his solo material, and his voice is as good as ever.

The closer, ‘War Of The Worlds’, saw the crowd singing back with gusto and not wanting to stop. Jørn responded to this by singing a stripped down version of ‘Man On The Silver Mountain’ over the audience vocals, bringing the set to a very satisfactory conclusion. 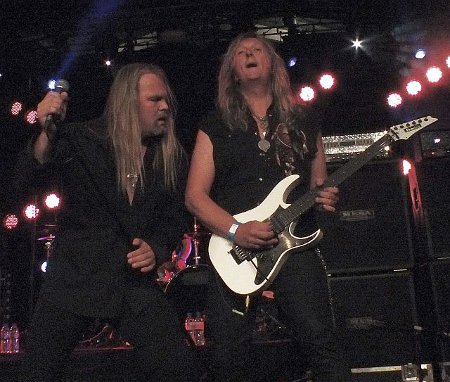 Over to Stage 2 to catch the end of Roadhouse’s set. This was an absolute corker, and had everyone dancing and just enjoying being in the moment. This had been a feature of the entire weekend – no surprise really with the harvest full moon in Aquarius being perfect conditions to gather with kindred spirits and networks and experience the transcendent power of music.

Wishbone Ash closed the festival main stage with twin guitar loveliness. ‘The King Will Come’ is one of the best set openers and this led in to ‘Sometime World’ and its glorious harmonies. From there the set was pretty faultless technically.

The band continue to put out solid new material, which was mixed with the older songs. It was a fitting end to a great festival, and there is no denying the talent of Andy Powell and co and their heritage.

This had been another fantastic weekend at this great festival, with so many positives. It delivers the goods on all counts and is a shining jewel on the Cambridge music scene. 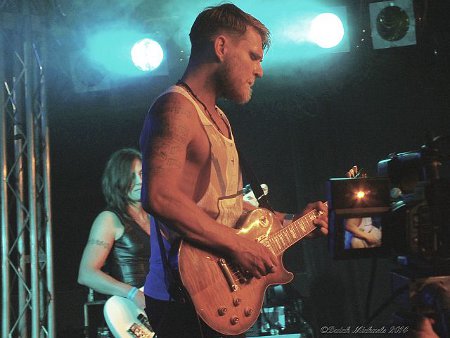 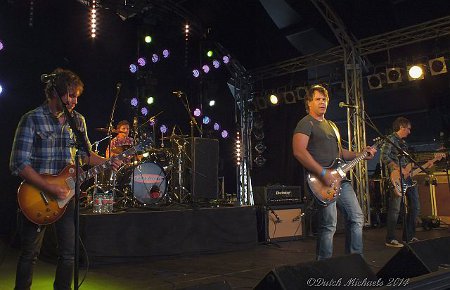 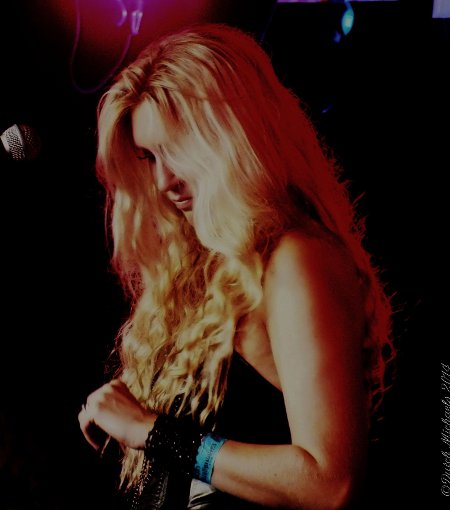 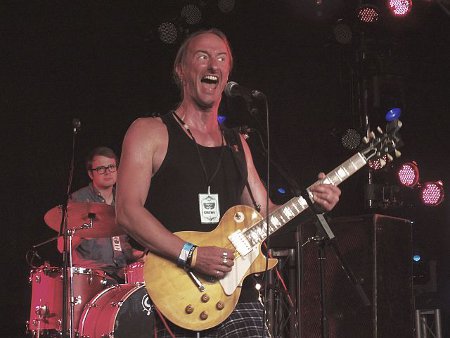 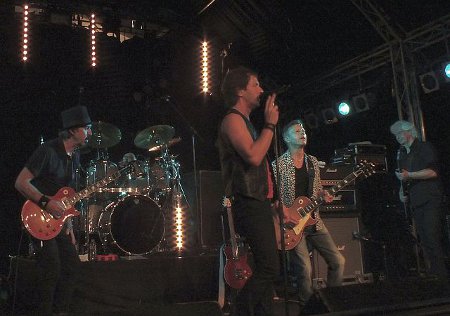