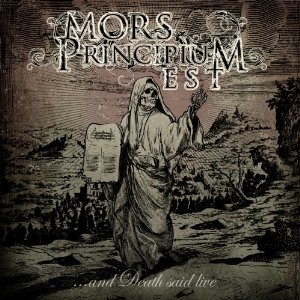 It has been five years since their last release, ‘Liberation = Termination’ and they have seen several changes in their line–up, but it has certainly been worth the wait for the fourth full length, ‘…And Death Said Live’, from Finland’s death Metal legends Mors Principium Est (whose name means death is the beginning).
Mors Principium Est: ‘…And Death Said Live’ (AFM Records)

On ‘…And Death Said Live’ they have certainly managed to once again capture the essence of the Gothenburg Sound whilst adding their own unique slant on it. The level of musicianship is higher on this album with all band members really pushing themselves to exceed the standards realised on ‘Liberation = Termination’, which was an excellent album in its own right.

You are presented with excellent, rapid but not overpowering drum work, melodic and fast paced guitars and subtle keyboards which accentuate the mood of the tracks and most importantly, excellent vocals, harsh and gravelly with a good range and high level of clarity.

The album opens with an atmospheric instrumental, ‘The Awakening’, which flows seamlessly into the emotive and up tempo ‘Departure’.

On ‘I Will Return’, I particularly liked the rise and fall in tempo and the twists and turns in its construction which made it an engaging listen. There is at times a slight feeling of sameness amongst the tracks but I have found that tends to be the one minor pitfall with ‘Melodeath’ but there are plenty of standout moments to elevate this album above many others of this genre such as the spiralling repeat riff on ‘Bringer Of Light’ which I loved and the beautiful emotive opening repeat riffs on ‘Ascension’ which go on to form the backbone of the track.

The album is broken up midway with, a beautiful, reflective and emotive instrumental, the title track, ‘… And Death Said Live’.

On ‘Destroyer Of All’ a reflective piano opener builds until the track kicks in fully like a smack to the face. The track also boasts, as do many of the tracks on this album, some good solos, with possibly the best of all featuring on ‘What The Future Holds’ and on the highly emotive ‘The Meadows Of Asphodel’. I think it is fair to say they saved their best work for the second half of the album.

Mors Principium Est go out on an absolute blinder with the marathon final track ‘Dead Winds Of Hope’, awash with spiralling riffs and splendid solos the track is nicely broken up with several tempo changes and this track features the best vocals on the album for range and delivery.

The album also has guest appearances from Jona Weinhofen (Bring Me The Horizon) and Ryan Knight (The Black Dahlia Murder). The production, which was done at Swedish Panic Room Studios (Solution .45, Scar Symmetry) is much higher, with a more polished finish on this album than its predecessor, something that I personally like, although a lot of people prefer a more ‘rough around the edges’ feel to the sound. I think it suits the material and standard of musicianship, presenting it to its best advantage.

I really like this album and If you enjoy death Metal with a Gothenburg element to its sound you will love this.

‘…And Death Said Live’ is out now on AFM Records.