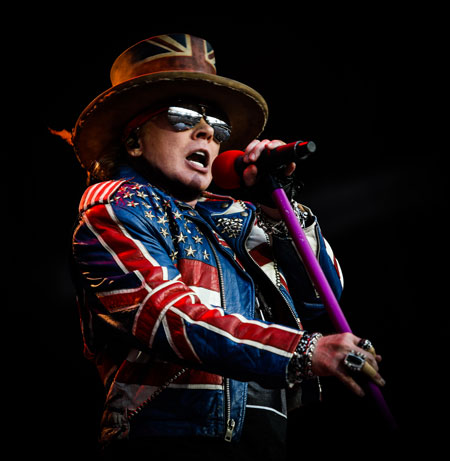 The story started when Axl Rose allegedly posted on his Twitter account, claiming the band were cancelling all shows. A hacker is said to have broken into the account of Axl Rose and used his account to break the news, however organisers say the tweet, which asked fans to contact show bosses for a refund, is a hoax.

“Although the concern is understandable since the most popular rock-band in the world is involved, there is no reason to panic because the tour and Zagreb’s concert will take place according to schedule,” explains Croatian concert chief Lupa Promocija.

Reading And Leeds Festivals boss Melvin Benn has told NME he is “absolutely confident” that Guns N’ Roses will play the events.

“I’m absolutely confident about them showing up,” said Benn, before describing what action he took following the publication of the Tweet.

“There were probably four or five emails back and forth between 1am (BST) and 3am Monday morning,” he said. “[Guns N’ Roses] agent was absolutely clear that it was false – it wasn’t true. I think he was in the UK, but I think he’d spoken to Axl and he came back and said it was a false alarm.”

Benn added: “Axl confirmed to the agent and the agent confirmed to us. When you look at the Twitter transactions, Axl’s Twittering is pretty infrequent and has generally been from a mobile phone. This wasn’t in Axl’s style.”

The festival organiser said his first reaction to the Tweet was one of “disbelief”, before adding that he does not know why it is still visible on the site as of today (August 18).

“I didn’t know it was still on,” he said. “I don’t know why it hasn’t been deleted. It certainly is completely untrue.”

The Reading And Leeds Festivals take place on August 27-29. Arcade Fire and Blink-182 are the other headliners.