It’s been over 21 years since the king of rock passed away. It’s also been 26 years since Freddie Mercury performed his last ever live show with Queen at Knebworth Park in 1986, a show that I was fortunate enough to attend and a fabulous performance that I still regard as the best festival show I’ve ever witnessed and can remember it just like it was just yesterday. 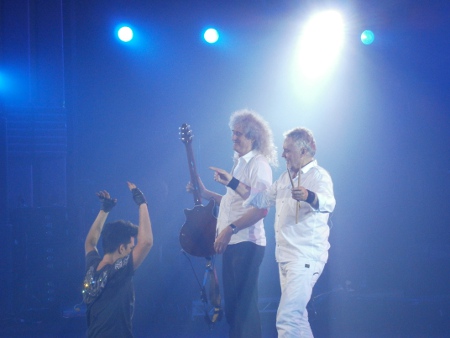 In the past two decades there has not been one singer who can come anywhere near the magic of Freddie Mercury. He was the greatest, who with Queen could sing at ease Heavy Metal, progressive pomp rock, funk, disco, pop and even classical. Mott The Hoople singer Ian Hunter summed up the genius of Mercury perfectly in the programme notes of the Freddie Mercury Tribute programme from 1992 in which he states: “It’s taken all these singers here today to sing the songs of Queen, but it only took one Freddie Mercury.”

The spirit of Freddie Mercury still looms large to those who knew him on a personal level or to the millions of fans who knew Freddie through the songs he wrote or by those written by his band mates which were interpreted to perfection where you really felt that Mercury was singing to you personally. I’ve only ever cried over the death of a rock star twice in my life. I cried my eyes out the day that Freddie died.

No one can blame Brian May and Roger Taylor for wanting to get on stage and play these magical songs again. Equally no one can blame bassist John Deacon for deciding to totally quit from the music business and spend a quiet life with his family. Both Taylor and May have both made solo albums and done tours to support them. May and Taylor decided to continue with the Queen name and surprised many when they joined forces with former Free/Bad Company singer Paul Rodgers to tour in 2004 and make the ‘Cosmos Rocks’ album in 2008 and although the resulting tour was very good, the soulful voice of Rodgers didn’t really compliment the fun element of Queen. 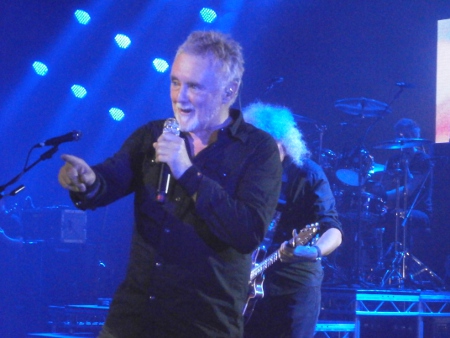 As Freddie sang himself, the show must go on, and more names were dropped into the hat for more possible live dates for the future. Robbie Williams and Justin Hawkins of the Darkness were possibilities, but it was the TV programme American Idol that brought Adam Lambert to Queen’s attention when they were invited over to the States to perform a couple of Queen classics with Lambert on live TV and that was when the wheels were set in motion.

So in 2012, to the surprise of many, Queen and Adam Lambert announced they were to perform three very special sold out shows at the legendary Hammersmith Odeon (which it will always be affectionately known as), the first time Queen have performed at this venue since 1979 for the Concert For Kampuchea. 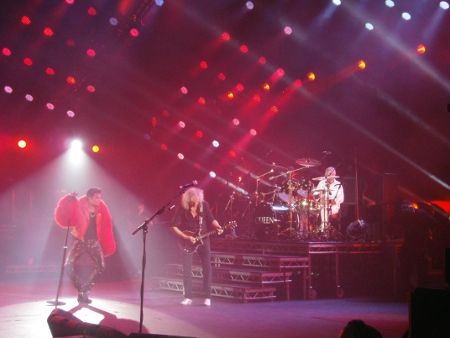 Lambert has his critics from the rock circle, as Queen have always actually had throughout their entire career, but his high octave range and flamboyant presence is exactly what Queen needed. I even had reservations myself and the only true way to find out if the boy is up to the job is to live the live experience myself.

Admittedly it does take a few numbers for both Lambert to find his feet and for myself to really get use to the grasp of the American but it doesn’t take long for him to be accepted and when he runs out on the platform into the crowd he is greeted with hysterical applause, dressed in black like an extra from a camp version of Mad Max.

With the opening bombast of ‘Seven Seas Of Rhye’, ‘Keep Yourself Alive’ and the ‘Live Killers’ version of ‘We Will Rock You’ the place is rocking. The atmosphere inside Hammersmith is electric and not only are the crowd all the way behind Lambert but this is also a celebration of the music of Queen with a killer Queen set list. 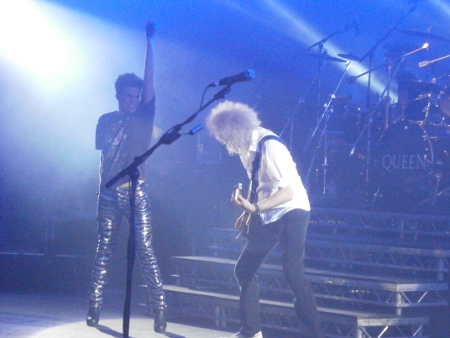 To complete the band the line up is joined by ‘fifth’ member Spike Edney on the keys, Neil Fairclough on bass and Roger Taylor’s son Rufus is on percussion. Roger Taylor joins Lambert to share vocals on ‘Under Pressure’ and takes on the vocals alone for ‘A Kind Of Magic’ and the poignant ‘These Are The Days’. Lambert won any doubters over with a stand or fall version of ‘Who Wants To Live Forever’ where his range silenced many.

Brian May sits on a stool for the acoustic ‘Love Of My Life’ where the last verse raises a massive cheer when a back screen video of Freddie Mercury appears in which he sings to the audience who lovingly sing back. As May looks behind him he wipes a tear away from his eye. 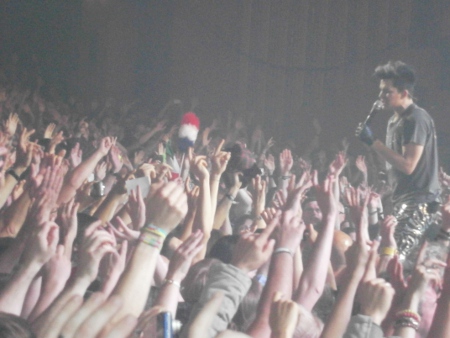 Lambert later returns to the stage dressed like a flourescent ostrich for the funky ‘Dragon Attack’ before a drum solo battle between the two Taylors.

The show can’t go wrong with global hits like ‘I Want To Break Free’,’ Another One Bites The Dust’ and ‘Radio Ga Ga’ where the sight of four thousand pair of hands clapping in unison is a sight to behold.

Set closer ‘Bohemian Rhapsody’ sees the screen come alive once more with the younger Queen doing the ‘Scaramouche’ parts before Lambert explodes back onto the stage in a blaze of fireworks to rock the joint to it’s finale.

Both Queen and Adam Lambert were the champions tonight in a historical and monumentous gig… THE SHOW MUST GO ON! 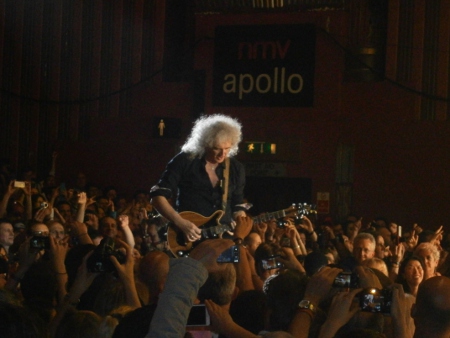 Set list:
Flash (Intro)
Seven Seas Of Rhye
Keep Yourself Alive
We Will Rock You (Fast version)
Fat Bottom Girls
Don’t Stop Me Now
Under Pressure
I Want It All
Somebody To Love
Who Wants To Live Forever
A Kind Of Magic
These Are The Days Of Our Lives
You’re My Best Friend
Love Of My Life
’39
Dragon Attack
I Want To Break Free
Another One Bites The Dust
Radio Ga Ga
Crazy Little Thing Called Love
The Show Must Go On
Bohemian Rhapsody