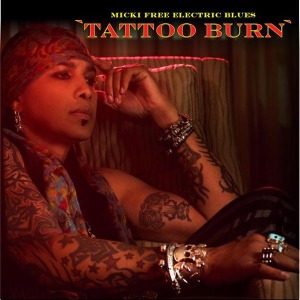 Micki Free is a musician’s man and is no stranger to success. A guitarist influenced by Jimi Hendrix Micki Free also crossed trends to join Shalamar at the tail end of their success, played in the cult AOR band Crown Of Thorns alongside Jean Beauvoir and in more recent times has been embracing his Cherokee and Comanche heritage in not only creating North American flute music but also as an established blues artist. Regulars to the Hyde Park Calling events will have seen him opening the days three times in the last five years.

If ‘Tattoo Burn’ was a football match then this album will most certainly be a game of two halves. The first five opening numbers are sublime, soft, easy listening blues of the highest order featuring some clear mesmerizing fret work. The title track reminds me of ZZ Top when they were still capable of giving us some dry Texas blues. Not surprising then that Billy Gibbons is a good buddy of Free.

There is some neat Hammond work to accompany Free on ‘Six Feet Down In The Blues’ and harmonica on ‘Mojo Black Coffee’, all ingredients that make for a great blues album but then the album takes a turn into mediocrity as a self indulgent take on Hendrix’s ‘Voodoo Chile’ meanders on into snoozesville for over sixteen minutes.

It would’ve been much more pleasurable if they included the shorter eight minute live version from Hyde Park as seen in the clip below as they already include on this album another Hendrix cover from that very same gig, namely ‘Red House’, which features guest Bill Wyman from the Rolling Stones.

There are two more good studio tracks on offer though in ‘There’s A Hole In The Heart Of The Blues’ and ‘Angels In The Room’ which should have been pushed further up in the running order.

Bizarrely the album clocks off with the Chiristmas ditty ‘Five Minutes Til Christmas’. One to please the bluesman in the house come the 25th December but surely someone at the record company should have retitled it ‘Eight Months ‘Til Christmas’?

CD’s were made for albums like this. Programming certain tracks is a must and so is that repeat button. Enjoy.