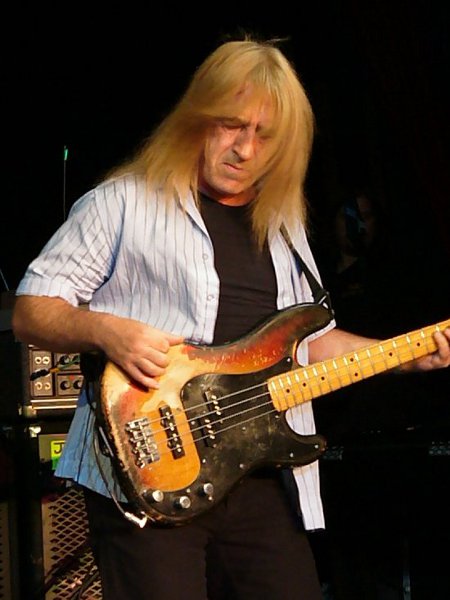 Trevor Bolder was born in Kingston Upon Hull, East Yorkshire, England in 1950. His family were keen musicians with his father teaching him to play the trumpet. He also played cornet in the school band.

Playing on the local blues scene in the 60s Bolder struck up a friendship with guitarist Mick Ronson in the band The Rats who later recommended Bolder to replace Tony Visconti in David Bowie’s band in 1971.

Bolder plays bass and trumpet on Bowie’s fourth album Hunky Dory (1971) which featured the tracks ‘Changes’, ‘Oh You Pretty Things’ and ‘Life On Mars?’, but the album did not chart until after the success of the next album.

David Bowie was to become a household name, at times shocking the world with his androgynous alter ego of Ziggy Stardust. The backing band of Ronson, Bolder and Mick Woodmansey would become known as The Spiders From Mars and the resulting album, ‘The Rise And Fall Of Ziggy Stardust And The Spiders From Mars’ (1972) captured the public’s imagination and both this album and the previous ‘Hunky Dory’ made massive waves on the charts with the single ‘Starman’ being Bowie’s first hit since ‘Space Oddity’ three years before.

Bolder played on two more albums with Bowie on 73s ‘Aladdin Sane’, Bowie’s first number one album and the cover album ‘Pin Ups’ which was to be the last album featuring Bowie with the Spiders From Mars. Also that year Bolder played bass on Dana Gillispie’s album ‘Weren’t Born As A Man’. Bolder and Woodmansey, who had both converted to Scientology, resurrected the Spiders From Mars in 1975 minus Mick Ronson and released an eponymous album a year later.

In 1976 Bolder joined Uriah Heep replacing John Wetton, around the same time the band had sacked their charismatic singer David Bryon who was replaced by John Lawton. It was a new era for Heep who had enjoyed worldwide success up to now.

The Lawton era released three albums in two years with ‘Firefly’, ‘Innocent Victim’ both from 77 and ‘Fallen Angel’ a year later. The single ‘Free Me’ was a big hit in some parts of the world hitting the number one spot in New Zealand and at one point Uriah Heep had three singles in the German top 20.

John Lawton left the band and was replaced by the young singer John Sloman for the album ‘Conquest’ (1980) which was poorly received with it’s attempt at a commercial route. Main songwriter Ken Hensley left and the band almost dissolved. Bolder, who needed an income, briefly left the band.

Trevor Bolder then joined Wishbone Ash, coincidently replacing John Wetton again for 82s ‘Twin Barrel Burning’ album, but then accepted the offer of rejoining Uriah Heep after guitarist Mick Box had built the band up again gaining the respect of fans and critics alike. Bolder rejoined the band to tour the USA as support to such bands as Rush, Judas Priest and Def Leppard. Bolder’s first album back with Heep was ‘Equator’ (85) with Peter Goalby on vocals.

With new additions of Bernie Shaw on vocals and keyboardist Phil Lanzon, the lineup remained unchanged from 1986 until 2007, with veteran Mick Box at the helm, Trevor Bolder on bass and Lee Kerslake on drums. In December 1987 they were one of the first ever Western bands to play in Soviet Russia, under Mikhail Gorbachev’s policy of Glasnost At Moscow’s Olympic Stadium the band played ten consecutive nights to a total of 180,000 people.

This gave Uriah Heep a renewed interest in the UK and the band played a storming set at the Reading Festival in 1988 winning themselves a new generation of fans.

Trevor Bolder was a regular songwriter on most latter day Heep albums even taking on the role of producer for 91s ‘Different World’ album, although Bolder did find this an exhausting task stating: “Although it was an experience, I found it tricky wearing the hats of both band member/musician and producer.”

In 1994 Bolder played at the Mick Ronson Memorial Concert at Hammersmith Odeon. It was here that he met Joe Elliot and Phil Collen of Def Leppard who were big Bowie fans and three years later they formed The Cybernauts along with the remaining members of The Spiders Of Mars for a few low key gigs, one which was record for a live album released in 2000.

In 2012 and early 2013 Bolder worked with Stevie ZeSuicide (aka Steve Roberts, UK Subs) as producer on singles ‘Wild Trash’ (co-writer with ZeSuicide), ‘Lady Rocker’ and a cover of ‘Ziggy Stardust’. Bolder also played on these tracks.

Trevor played his last show with Uriah Heep in Zwolle, Holland on 16th December 2012 and was hoping to make a full recovery and be back with the band in time for an appearance at this year’s Download Festival.

Bolder passed away in May 2013 from pancreatic cancer. He had been in the band so long that fans rightly regarded him as an original member who stunned fans with solid performances of both new and older material.

David Bowie said of his former band member: “Trevor was a wonderful musician and a major inspiration for whichever band he was working with. But he was foremostly a tremendous guy, a great man.”

Mick Box said: “Trevor was a World Class bass player, singer and songwriter, and more importantly a World Class friend. He will be sadly missed by family, friends and rock fans all over the world.”