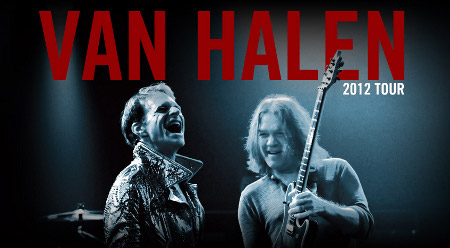 When Van Halen announced a host of shows earlier this year, a lot of people were disappointed that no UK dates were included. I certainly was, so I was lucky enough to combine a holiday in the US with one of the dates.

The only time I’ve seen them previously was in the Sammy Hagar days, back in the summer of 1995 when they supported Bon Jovi as part of their ‘These Days’ tour. So I was eager to see them play for a second time, but this time with Dave Lee Roth at the helm.

Before the show I’d read a number of conflicting reports on the gigs and a lot of criticism on DLR and negativity surrounding the absence of Michael Anthony, replaced by Eddie’s son Wolfgang. But as I entered the Bank Atlantic Center I went with an open mind, willing the poor reviews to be down to personal opinion, not fact.

This place is almost a replica of London’s O2 Arena, which filled me with a sense of dread that it was going to be as soulless and expensive as there. But it wasn’t, it was worse.

First up was a trip to the merch stand, where men’s t-shirts were retailing for $35 for the smaller sizes, which I guess is about standard, but the larger men were left with what can only be described as a ‘fat levy’, paying $40. But what struck me with complete surprise was that the fat price also applied to the female option. Less material and fewer choices, seems like the ladies got a raw deal here.

Then to the bar, which was ludicrous, with a double vodka and soda setting me back a cool $17! Which was enough to ensure my trips to the bar were minimal tonight.

So into the venue and, having taken the decision to miss openers Kool And The Gang, it wasn’t long until the house lights were cut, to be replaced with a stunningly lit drum kit and Alex Van Halen hitting the stage, followed by Eddie, Wolfgang and DLR, who had a plywood makeshift dance floor to maximise his dancing opportunity.

As they kicked the show off with ‘Unchained’ I have to admit to being completely underwhelmed. Seemed like Dave’s focus was on his dance moves and the rest of the band seemed out of time and not the tight outfit you’d expect with a band of this calibre. And with being in a gigantic arena comes that ever familiar echoey sound.

Moving swiftly on to ‘Runnin’ With The Devil’ and it became so apparent what was missing and that was Michael Anthony’s backing vocals. Try as he might, Wolfgang just couldn’t live up to his legacy and this gave for a very disappointing version of one of my favourite all time songs.

That changed though once they moved on to the new material. ‘She’s The Woman’ and ‘Tattoo’ saw a marked improvement in the whole set and Dave Lee Roth handled the vocal well, even combining it with impressive dance moves for a 58-year-old and majorette style spinning of his mic stands.

Most of the crowd seemed to be enjoying the show, but the disappointment in a lot of fans was also apparent. Maybe some of us expected too much and so were left with that empty feeling. DLR was very chatty and only he could get away with stopping the show dead in it’s tracks to complain that the blowers were on too high. Did he realise that we were in stifling heat in South Florida and that the cool air was desperately needed to stop us cooking!

There was some impressive solo work tonight, which was a saving grace to the whole night. First Alex had his chance to shine and a perfectly timed drum solo was met with the other three standing to the right of his kit, full of admiration. Then Dave had his solo spot as he took to his dance floor, armed with acoustic guitar, to perform his version of ‘Ice Cream Man’.

But it was of course Eddie Van Halen who mesmerised the crowd with his guitar solo. He started off sitting on the step and gave a master class in how to play, and it’s a class that the whole arena were willing to attend as the place was silenced.

The penultimate song of the night, ‘Ain’t Talkin’ ‘Bout Love’ was met with a much better reception, and then the whole night ended with the 80s anthem ‘Jump’ coupled with confetti canon and giant chequered flag. Sadly Diamond Dave didn’t replicate the jumps from his karate inspired days of old, but he did carry on his slide moves.

All in all this was a very disappointing show, with only glances of genius that you’d expect from a band like Van Halen. It’s a real shame that they couldn’t put differences aside and welcome Michael Anthony back to the party as I guess my review would have taken a very different stance.

I didn’t so much as jump from the venue home but limped back feeling like I’d been cheated.

Previous article
WORLD EXCLUSIVE: ZP THEART RETURNS WITH NEW BAND I AM I: DEBUT ALBUM AND FIRST GIG IN MAY
Next article
VAIN/FURYON/STALA AND SO