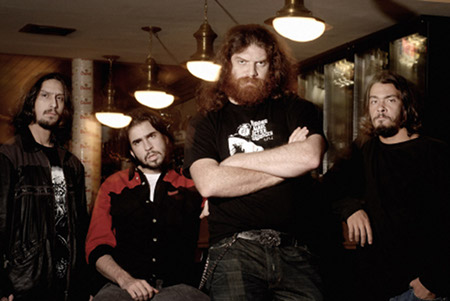 Countrycore is how the Brazilian media have labelled the type of music that Matanza, a band from Rio de Janeiro, plays. You know when Heavy Metal meets hardcore punk and country music? No? Well, this is countrycore!

One curious fact I should also mention here is that they sing in Portuguese, and their cynical and sarcastic lyrics are about normal people – hangovers and days when the best solution to everything is to tell everybody to go to hell. Everything done with humour – bad humour!

It all began around 1997 when vocalist Jimmy ‘The Giant Irish’ London and guitarist Donida had the genius idea of exploring the simple and direct melodies of Johnny Cash and the drumming style of Scottish punk band The Exploited.

In 1999, they got a contract with Abril Music to release their first album, which they did in 2001. Their debut album is called ‘Santa Madre Cassino’ and the songs, ‘Ela Roubou Meu Caminhao’ (‘She Stole My Truck’) and ‘Mesa de Saloon’ (‘Saloon’s Table’) quickly became fans’ favourites. Unfortunately, they were fired from the record label for not having a ‘commercial’ sound.

In 2003, already with a new record company, DeckDisk, they released their second album, ‘Musica Para Beber e Brigar’ (‘Music To Drink And Fight’), and two years after that another album was out: ‘To Hell With Johnny Cash’, an album with covers from Cash’s early career. This project started with a ‘compact of four songs that they used to play at their shows. Suddenly, they realised they already had three different compacts so released them all together as a CD/DVD, making them the first Brazilian band to release a dualdisc in national territory. 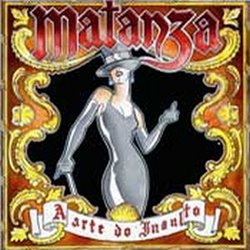 In October 2006, they released ‘A Arte Do Insulto’ (‘The Art Of Insult’). It was obvious they’d grown professionally. Their lyrics were more mature, their sound much more intense and their shows more energetic. They even experimented with a few elements of Irish folk. From that album, the song ‘Clube Dos Canalhas’ was chosen to be their single. Here’s the video:

As recognition for their good work and for having such a solid fanbase, Brazilian MTV invited them to record their first live CD/DVD, ‘Matanza Ao Vivo’, in 2008.

Five years after that, Matanza released ‘Odiosa Natureza Humana’ (‘Odious Human Nature’). This album was actually recorded live in only three days using one analogue tape back in 2010.

Donida’s heavy and well-played guitar complements Jimmy’s strong, dark voice in songs like ‘RemÈdios Demais’ (‘Too Much Medicine’), ‘Saco Cheio E Mau Humor’ (‘Fed Up And Bad Mood’) and ‘Carvao, Enxofre E Salitre’ (‘Coal, Sulfer And Saltpetre’). The marriage is perfect, but it only happens in the studio. 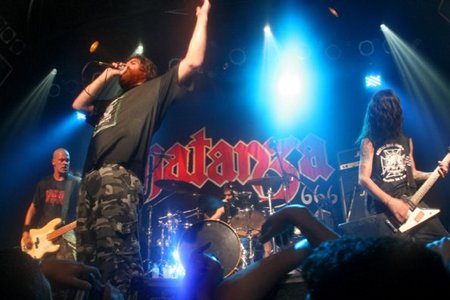 Two years ago, Donida decided to dedicate himself, on a daily basis, to his other job as an illustrator and designer, mainly of storyboards for movies:

“I was sick of travelling, sleeping little, doing ninety shows a year and having to work on Mondays”, says Donida. “I never wanted to have the band as my main source of income. My art is not for that. So I stopped with the traveling, but I still write and record the albums.”

Donida is also responsible for Matanza Comix – ‘quadrinhos para beber, brigar e insultar pessoas’ (‘comics to drink, fight and insult people’). It is a forty-four-page comic book and it can be found onsale on their website and shows. 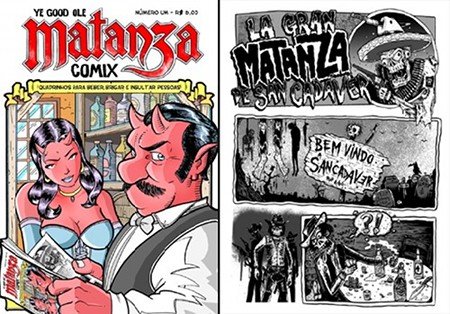 After fifteen years on the road (with an average of more than ninety shows per year) and having recorded six studio CDs and one live DVD, ‘Odiosa Natureza Humana’ shows us a Matanza more ‘Matanza’ than ever: heavy, fast, bad-tempered, ironic and, of course, playing their trademark Countrycore! 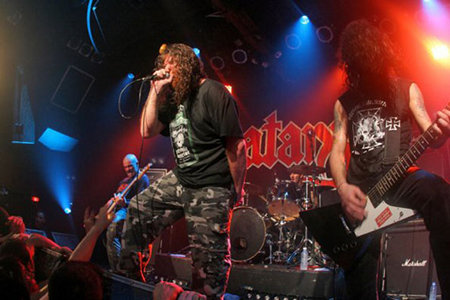 At the end of 2011, Matanza’s success was recognised when they were booked as opening act on the Sunset Stage of Rock In Rio. Later that night, on the same stage, Angra performed with Tarja Turunen as special guests and so did Sepultura with Tambour Du Bronx as special guests. The main acts of the night were Motorhead, Slipknot and Metallica on the World Stage. Here are Matanza Live at Rock In Rio: