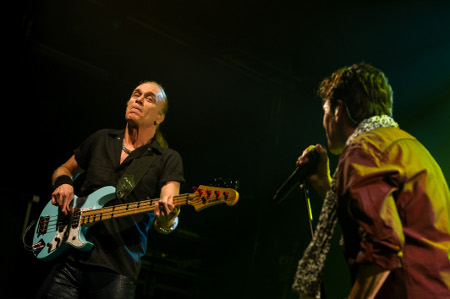 Mr Big opened their world tour in the famous Koko Theatre in Camden in support of their new album, ‘The Stories We Could Tell’.

Expectation for the return of the band had been high and fans had turned up for this first sold out night from all over the world including Japan, Germany and Finland. The moment the band hit the stage the energy in the crowd was palpable. The band were conquering heroes.

The set consisted of the classics from their previous albums, highlights being ‘Alive And Kicking’, ‘Collorado Bulldog’, ‘Take Cover’ and ‘Undertow’ as well as a sprinkling of half a dozen songs from the new album, such as the opener ‘Gotta Love The Ride’, ‘I Forget To Breathe’ and the awesome ‘Fragile’. The new songs sounded powerful and gritty in the live format.

As is traditional at Mr Big shows, we got the guitar and bass duels, electric drills and solos galore from Gilbert and Sheehan but the actually solo spots seemed shorter than in previous years, perhaps to squeeze more songs into the show.

Eric Martin’s voice was on top form taking us from hush ballads to screaming rock. The audience lapped up his easy attitude and onstage charm. 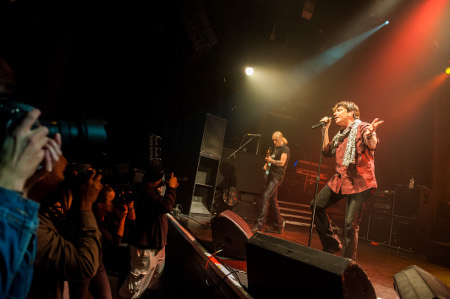 Newboy drummer Matt Starr (who also plays in Ace Frehley’s band), did the job admirably. He’s stepped into to play the bulk of the set live since original drummer Pat Torpey’s diagnosis with Parkinson’s Disease.

There was an element of uncertainty to the show, as if the band weren’t quite firing on all cylinders yet, moments that needed ironing out but these hiccups were easily glossed over by musicians of this calibre. Besides, this was the first night of the tour with a new setlist, new album and new drummer. 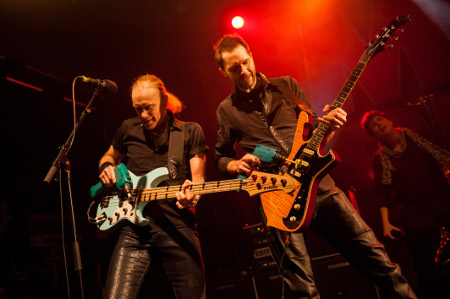 The real high point of the night however was when Pat Torpey unexpectedly joined the band onstage. The moment he was introduced, the crowd went wild chanting “Pat Pat Pat!” It seemed quite an emotional moment for Pat too who was beaming from ear to ear. First he added some percussion alongside Matt’s drumming, then came up front to sing alongside Eric for ‘East/West’ from the latest album.

Pat was smiling on and off the stage for several songs, playing drums on ‘Just Take My Heart’, then taking lead vocals for a cover of Judas Priest’s ‘Living After Midnight’. 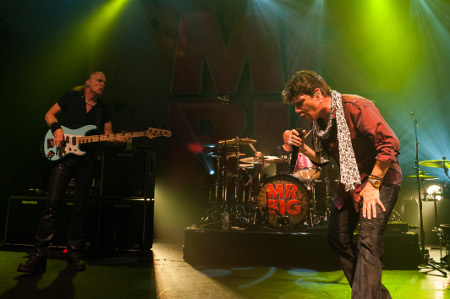 Finally, after the obligatory shredfest of ‘Addicted To That Rush’ and the worldwide hit ‘To Be With You’, the band left the stage to a super groovy cover of Free’s ‘Mr Big’ again with Pat Torpey on drums.

Everything we could have hoped for from a Mr Big gig and a bit more in the shape of a certain Mr Torpey’s smile.