At last the Tank tour kicked off this Summer in support of the very well received new album ‘War Machine’.
Tank has come a long way since it first formed in the early eighties. Gone is the punky edge, replaced by a classic rock sheen, old frontman Algy Ward now replaced by the outstanding former Rainbow/Malmsteen vocalist Doogie White. 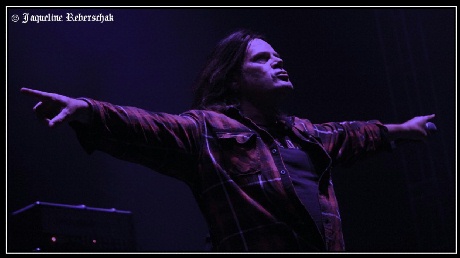 There’s a new rhythm section: Mark Cross (formerly of Firewind and Helloween) and my good self on bass.

In fact, Tank 2011 bears little resemblance to Tank circa 1984, the only constant being the enormous riffs of guitarists Mick Tucker and Cliff Evans.

To complete the touring entourage this summer was MetalTalk.net Editor, Steve Goldby, in his role as Tour Manager and general Party Animal.

We did the obligatory rehearsals at Bush Studios in West London. Rehearsals are not supposed to be fun, they’re hard work. If we concentrate and get it sounding good here, we can go and have a blast on tour, that’s the general aim. So with that out of the way, we set off up North for the first shows.

The first show was a small working men’s club in Middlesbrough. There were two reasons for this gig. Firstly, we thought it’d be better to put the band into action in front of a small crowd (there’s bigger stuff to come later in the week) and, secondly, Middlesbrough is Mick and Steve’s hometown, so a good atmosphere and party were pretty much guaranteed.

Middlesbrough did not disappoint on either level. We blasted through the set (a mixture of Tank classics and new tracks from the ‘War Machine’ album) at full pelt. I don’t think the little club had ever seen anything quite like it.
Barmaids stood rigid with fear, fingers in ears, while the gathering of Metal fans at the front headbanged like grunge had never happened at all, which of course in Middlesbrough it probably never did.

Then for the party over the road with the town’s Metal elite. Members of Blitzkrieg (the openers), Tygers of Pan Tang and Lies Of Smiles were all out to celebrate their homecoming guitar hero, Mick Tucker. I’d never seen anything like it. Was it my imagination or is half of the town related to Mick? 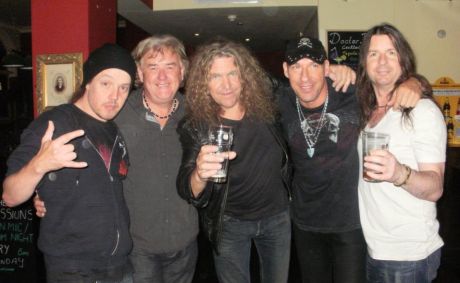 The next morning, we dragged our hangovers up to Newcastle Academy for the next show. This venue is more like a regular on the circuit. Again, we gave them a full broadside and left them reeling. We were getting pretty confident by now.

We’ve done a fair few gigs with me and Doogie in Tank now, but these were Mr Cross’ first shows with us and he really stepped up to the mark (no pun…well OK, pun fully intended, I couldn’t resist that one). Then back to the ‘Boro that night for a quick half… or two.

Next came the big show. Really big. We were supporting Judas Priest on the Polish date of their ‘Nearly Farewell’ tour. The venue was the Spodek Arena in Katowice. It holds about 15,000 and looks like a UFO. Honestly it’s crazy.

Judas Priest fans, of course, love their Metal. We knew that before we went onm but we didn’t know they also loved Tank.
From the opening chords of ‘This Means War’, they went mental. I thought they probably knew the old stuff but probably hadn’t heard the new tunes. I was wrong.
As we launched into ‘Judgement Day’ from the new album, they went up a level in their craziness. Singing along, crowd surfing, forming a circle pit…had they mistaken us for the headliners? 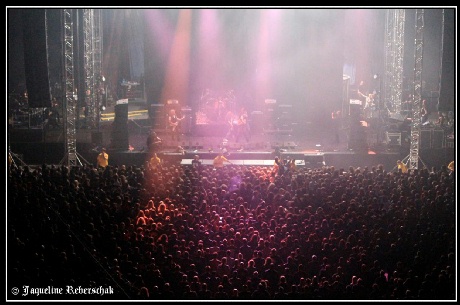 After our gig, me and Doogie hung out with some mates from Priest’s crew, caught up on old times and sunk a couple of swift free beers before the headliners took to the stage.

As has been said here many times on MetalTalk.net, Judas Priest are reborn. They really have taken on a new lease of life with Richie Faulkner in the band. Old tunes are dusted off and new ones (I still think of ‘Painkiller’ as new) sound better than ever before. How can this be their last tour? It simply cannot be!

The next day, we trundled over to an airport and checked in. Well, you can’t top a gig like that can you? It’ll be nice to go to Scandinavia, but nothing can top the high of playing to several thousand screaming Metallers… surely?

Usually, when a band arrives in a town the day before a show, they get given the keys to their hotel and told, “see you in the morning… bye”. But not if the promoter and his friends are as hospitable as Hans, Bjorn-Erik, Christian and Ronnie in Norway. They picked us up from the airport, then took us to a log cabin halfway up a mountain with stunning views of the city of Drammen and the fjord below. Then they set a barbecue ablaze and the beers began to flow. Burgers, smoked pork, potato salad, sausages…who could not love that?
Perhaps our vegetarian guitarist, Cliff? But, come on, Cliff, potato salad and dry bread is a meal isn’t it? He could have had the ketchup too if he’d felt adventurous. 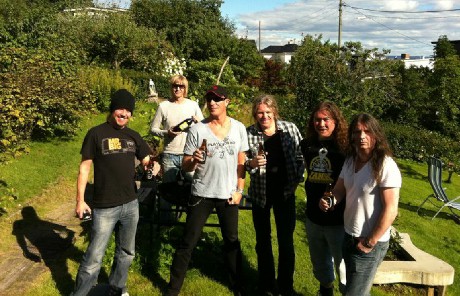 I nearly forgot we had a gig to do, it felt too much like a holiday. The gig was in a small club, and Drammen is by many standards a small town (although it did used to be the capital of Norway – but we’re going back a bit here). Small gig, small town, mid-week…it’s going to be quiet right?

But no, I keep underestimating Tank fans. By the time we went onstage, the place was fairly heaving. Good Lord, they’re even singing along to the intro-tape! We gave them hell and they returned it…brilliant Metal fun!

After the show, we hung out at the bar, chatting with the locals. Some chap came up to me and asked if I was the same Chris Dale who played on Bruce Dickinson’s ‘Skunkworks’ album. I couldn’t deny it.
He told me earnestly that that album had helped him through a hard time in his life. He just wanted to thank me. I was genuinely touched (as touched as one can be after that many beers). It really is so nice to be appreciated sometimes. 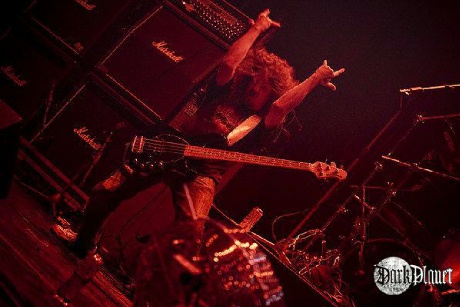 The next morning, we left for Sweden with heavy hearts (and stomachs – except for Cliff, who was a bit peckish by now). Now, we all love Sweden and we know Sweden loves Metal, but it’s not going to be as good as what we’ve had so far is it?

The venue, Rockland, in Sala, is outside a small town next to a disused silver mine…but inside is a gold mine of its own!
It’s like a rock and roll museum! They’ve got more memorabilia on their walls than the Victoria and Albert Museum.
They had Beatles singles, vintage guitars (I think both Mick and Cliff wet themselves a little – they won’t admit it, but I spotted a damp patch on each of them), autographed photos going back to the sixties but, for me, the highlight was a genuine seventies Kiss pinball machine. I’ve never seen one in the flesh before let alone played one. 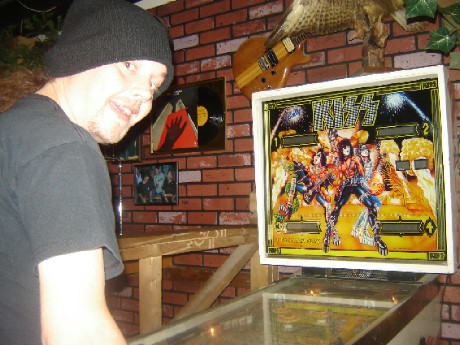 The local crew were three grey-haired old guys who’d seen it all. What they didn’t know about rock’n’roll was not worth knowing. We were in good hands.

Then that thing with Tank fans happened again. Literally, while me and Steve popped outside to catch the last of the sun’s rays, a bus pulled up and out poured loads of kids in Tank T-shirts!

The gig was another stormer! They couldn’t get enough. The whole week had been an amazing and full-on Metal experience. Perhaps I’d underestimated how Metal music touches the lives of all around.

After the show, we again hung around for beers and chatted with the folks. Again, some guy asked me if I played on the ‘Skunkworks’ record. ‘Yes!’, I said with some pride this time.
That was a really shitty record, he said with a deadly earnest look. Brilliant! Oh well, you can’t please all the people all of the time! That alone kept me laughing all the way home.
Could the week have been better? Probably not. 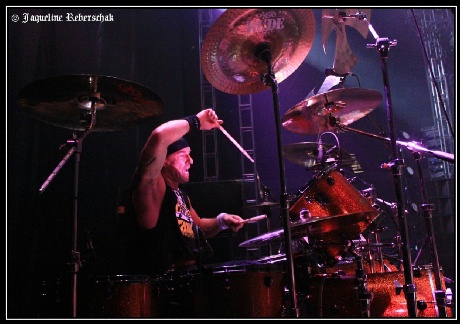 To finish, I would like to extend our thanks to everyone who made this trip a real party: John Lancaster and the extended Tucker family for such a warm welcome in the ‘Boro; Blitzkrieg for absolutely rocking the first two nights and for kindly lending us their backline; Judas Priest and their crew, especially Paul Bomber Jackson, Keith Crabtree and Richie Faulkner (you really didn’t have to be loading my bass gear out mate, you’re a rockstar now!); Hans Andre Dokka, Bjorn-Erik, Christian and Ronnie in Norway for the amazing hospitality; the crew at Sala for really going out of their way to be so helpful; Jaqueline Reberschak and DarkPlanet.Pl for the photos and, most of all, to Steve Goldby for flying the Tank flag with such pride…without people like this, life on the road would be such a dull place! 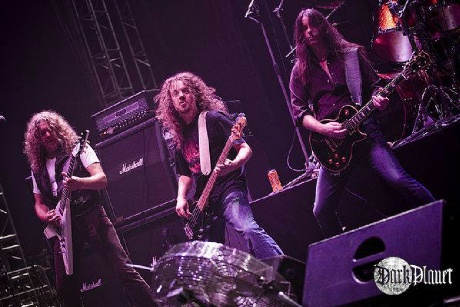