I’ve had my column at MetalTalk for a while now and have reviewed some marvellous Metal music. Classic bands like the Scorpions and Anthrax have rubbed shoulders with exciting new material from Dragonland and Taking Dawn. But there is one band that always stands apart: the enduring titans of Heavy Metal, Judas Priest! 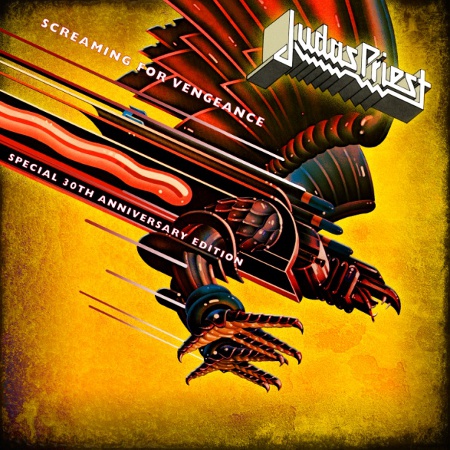 Without doubt, one of the most popular and influential Metal bands of all time, the mighty Priest have released a Special 30th Anniversary Edition of their classic album ‘Screaming For Vengeance’. The package contains the re-mastered album from 2001 (including the two bonus tracks) plus four extra live tracks from the US leg of the 1982 ‘Screaming For Vengeance’ tour and a bonus DVD which boasts the first ever commercial release of the band’s legendary 1983 US Festival show. In addition, the booklet includes sleeve notes by Eddie Trunk (US rock journalist, author and TV/radio presenter) and photos from renowned rock photographer Mark Weiss.

‘British Steel’ may be their critical masterpiece, ‘Painkiller’ their most intense, but ‘Screaming For Vengeance’ with its iconic yellow artwork and radio-friendly single, ‘You’ve Got Another Thing Coming’, has outsold them all and captures a definitive period in Priest’s history, especially in the US where they enjoyed their most commercial success.

Released in 1982, on the back of the lacklustre ‘Point Of Entry’ album, Priest had definitely become more deliberately commercial in an era that was a fertile period for record sales in the US. Even Quiet Riot, doing covers of Slade songs shifted a shed-load of albums back then! But despite this, the success of ‘Screaming For Vengeance’ was no fluke. Judas Priest were deservedly riding high on a wave of British Heavy Metal and released the perfect album at the perfect time. With a mix of heavy, yet radio-friendly tracks, it hit No 11 in the UK and No 17 on the Billboard 200, going on to sell more than two million copies in the US and five million worldwide.

There is no secret to the timeless appeal of this album. It simply has some great songs and it is short, fun and very easy to listen to. Understandably criticised for being soft, in fact it is actually surprisingly heavy in parts and shows a depth of song-writing that many one-dimensional ‘big-name’ Metal bands could never aspire to.

What’s exciting is the sheer variety of material on offer. Priest, having created their distinctive twin-guitar Metal sound, divert wildly into new directions on this album. There’s no doom-laden heaviness, seven-minute tracks, double-bass drum attacks or sword and sorcery lyrics. This is a slick, modern, hook-laden, entertaining and crowd-pleasing album. 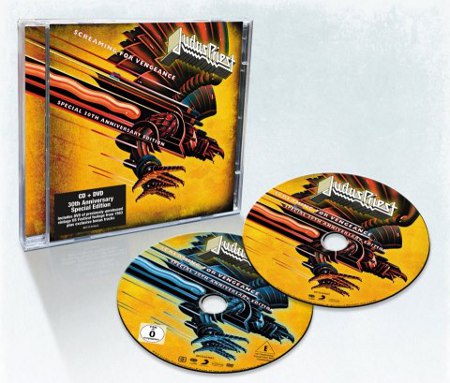 It all starts with ‘The Hellion/Electric Eye’. If you’re a Metal fan and you don’t recognise this intro, you need to go back to school!

‘The Hellion’ sets the tone like no other Priest song. It’s so definitively Judas Priest. And as the excitement builds, it suddenly jumps straight into ‘Electric Eye’. I don’t know what’s better – the riff or the opening lyrics: “Up here in space. I’m looking down on you. My lasers trace. Everything you do”.

It is futuristic sci-fi Metal, something Priest have always been particularly good at and it takes the themes of George Orwell’s 1984 and builds something sinister, eerie and cold. Priest have often been criticised for bad lyrics, (see ‘Painkiller’, ‘Loch Ness’, ‘Jugulator’) but credit where it’s due. This is brilliant.

‘Riding On The Wind’ takes the baton and runs even faster. Halford’s paint-stripping vocals take this one into the stratosphere. Still a live favourite, the urgent guitar-ledenergy is inescapable. As Halford shrieks: “Surging rush of power” you can really feel it. Thirty years on this track hasn’t lost its edge. Dave Holland’s drumming is great here too.

There are no weak tracks on the album, but nothing is at all predictable either. ‘Screaming For Vengeance’ is heavy as hell and starts and finishes with two of Halford’s all-time great screams! ‘Take These Chains’ is an enormous guilty pleasure power ballad, Priest-style, while ‘Fever’ and ‘Devil’s Child’ delight and mystify. ‘Devil’s Child’ especially never fails to interest me with its razor sharp riff and fraught lyrics of a relationship gone bad.

Priest had set the expectation with tracks like ‘Sinner’ and ‘Grinder’ that Heavy Metal needed powerful monstrous imagery to match the music. Yet here with ‘Fever’ and ‘Devil’s Child’, Halford is writing heartfelt – and possibly personal – lyrics with the emotional range to match Glenn and KK’s awesome guitar sound. ‘Fever’ has dated a little, but ‘Devil’s Child’ still sounds absolutely phenomenal. It must be one of the band’s all-time great tracks.

The most famous song, by a wide margin, is of course ‘You’ve Got Another Thing Coming’ – Priest’s most commercial track and the song they’ve ended their lives shows with for as long as I can remember. It’s a firm favourite. Allegedly a quickly written last-minute addition which became a hit, it has always epitomised the band’s chugging twin-guitar sound and is definitely a track made to be played live and enjoyed by thousands of screaming Metal fans!

The recent performance at Hammersmith, London with Richie’s new solo was phenomenal. Its popularity shows no sign of waning either as it’s still a rock-radio constant and was recently performed on American Idol to the delight – or abject horror – of Metal fans everywhere, depending on your viewpoint!

And that’s part of Judas Priest’s continuing allure. The band that wrote ‘Painkiller’ and ‘Dissident Aggressor’ manage to bring the riffs, the leather-studs styling and some phenomenal Heavy Metal into a 45 minute radio-friendly package – without too much compromise.

And thirty years after this was unleashed in the west, it stands as one of Metal’s all-time great albums. ‘Electric Eye’ still feels futuristic. ‘Screaming For Vengeance’ still resonates. ‘Riding On The Wind’ just rocks. ‘Devil’s Child’ intrigues endlessly and demands to be played on repeat. And ‘You’ve Got Another Thing Coming’ sounds better than ever.

So what’s the DVD like? Well this footage has been on YouTube for years and it’s just absolutely classic. Like Heavy Metal Parking Lot, it defines an era and it’s great to see the band at their peak. In fact, if you have the special edition Metal-studded box-set from a few years back (of course I do!) you get the DVD of the ‘Screaming…’ tour, live in Memphis and that’s probably the one to watch for pure focused Judas Priest.

But seeing any band play to an alleged 300,000 people is cool and it’s great that Sony have packaged this up and released it. It really makes this Special 30th Anniversary Edition worth buying.

This is a cracking re-release. The album has stood the test of time while the DVD of the US show and the bonus live tracks are great additions. It also captures a fantastic point in the band’s history when they were at their commercial and live peak. If you’re under 30 and have never quite understood why Judas Priest are so revered – this album is a great starting point.

INTERVIEW WITH CHRIS ASTLEY OF XENTRIX