I just got an email from Bernie Torme on the subject of the Ozzy guitarists’ article.

Of course Bernie’s opinion is a little more valid than mine. A; because he’s one of those guitarists, B; because unlike me he really knows what he’s talking about.

This is what he had to say…

Huge thanks for including me in that Ozzy guitarist list! I never realised there were so many to be honest. That bootleg of me is pretty horrendous, luckily you can’t hear too much of what I’m fooking up!

I think I’d personally plump for Zakk to be honest. While I don’t think he does the Randy stuff all that much justice, he is just such an awesome player in his own right: Jake was a lovely guy, looked great, but for me he never really lit the blue touchpaper on that stuff, but again totally awesome in his own right and his own area.

But neither touched Randy playing that Blizzard or Madman stuff, but then again no one could compete with the original. It was his thing, his vision and him playing to the edge of his abilities on his own stuff. A complete one off, incomparable.

In fact so incomparable I wish there wasn’t a million clones out there crucifying those songs, playing the notes (often completely wrongly) with none of the feel or fire. It’s depressing!

I may have got the notes wrong, but man I hung on grimly to the feel and fire! Or that’s my excuse anyway!

Also it’s much more than just the notes. I think for me, soundwise, Jake did get closest. He had quite a classic sound. Randy’s sound was essentially very classic seventies, Les Paul and Marshall Superlead, none of your master volume or 800 shit. (tho’ interestingly when Marshall did the Randy signature amp they did put a master volume on it, just so peeps could pretend to be Randy in their bedrooms. Ooops, that sounds a bit weird!)

I’m a guitar and recording nerd and Randy had that classic Les Paul and Marshall Superlead plus Celestion H grind and crunch that comes from the el34’s getting thrashed and not just from a chain of overloaded fizzy pre-amp valves. A man after my own heart.

Randy obviously also used Jacksons and Charvels, but they were pretty similar to Les Pauls soundwise. Jake for me was closest to that soundwise; he had that classic sound.

Brad used Mesa Boogies which are a very Californian US overdriven sound, not at all like Superleads, much smoother and less ugly.

Zakk has always sounded to me as if he used Marshall 800s, quite fizzy and scooped sounding and again I may be wrong about the specific amp, but again not at all like Randy.

All awesome guitarists though. Proud to be mentioned with those guys. 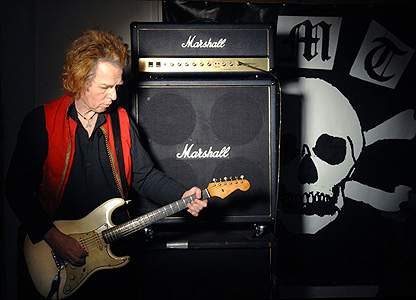