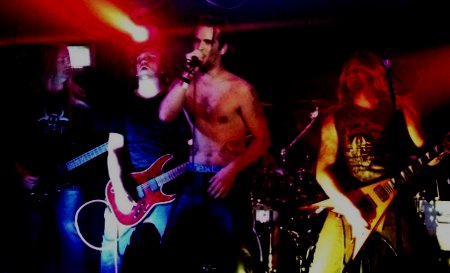 Brummie bruisers Hostile hit town on what should have been a busy Friday night for them but unfortunately the band were let down by promoters and agents meaning that their latest London appearance was blighted by a poor attendance.

So a massive hats off to them for pulling off the performance the way they did; as soon as they hit the Garage stage, it was as though they were headlining Download in terms of energy and enthusiasm and they never let up once.

Hostile tore through eight of the ten tracks on debut album ‘Eve Of Destruction’ (click here for our review of that album from December 2011) and pulled off excellent covers of ‘Paranoid’ and ‘Breaking The Law’ in homage to their fellow Black Countrymen Sabbath and Priest, two giants whose success Hostile are aiming to duplicate.

And on the strength of tonight, there is no reason why they shouldn’t go on and do just that.

They have enough variety in the tunes from their debut album to fill a set with total quality and this arsenal will be further swelled with the imminent release of the forthcoming second album.

Hostile have the right mix of aggression and feeling and plenty of variety in their repertoire and frontman Jay Mills led his band through a brutal set of cranium crashing tunes such as the monstrous ‘Fuelled By Hate’ and ‘Dig Up The Power’.

‘Addiction’ is a darker, slower song in line with Alice In Chains and ‘I Don’t Give A Fuck’ is a rabble rouser where Hostile show angry and hungry promise. Fucking Hostile indeed.

Hostile are getting there. They’ve notched up support slots with SoulFly, Morbid Angel and Lordi, played Download Festival and next up is a UK tour to support the new album. Their connection and involvement with one of our genre’s legends, KK Downing, has been well documented.

Impressed by their local show, KK not only agreed to produce their debut album, ‘Eve of Destruction’, but also to write a song for it, the aformentioned ‘Addiction’. This is something these boys can really brag about, as it’s the first time he’s written outside of Judas Priest.

We got some really good ad-lib soloing at the end of the set and this showed off the sharp skills of the individual members’ and left the listener in no doubt that this band have got all it takes to be a big success in today’s Metal world.

Setlist:
Stand Your Ground
I Don’t Give A Fuck
Hostile
Paranoid
Breaking The Law
Addiction
Blood For Blood
Fuelled By Hate
Brutal Images
Dig Up The Power

MULTIPLE SCLEROSIS: AN INSIGHT INTO THE DISEASE THAT TOOK CLIVE BURR