After a mere 27-year-long career in music, Carl McCoy says he feels like he is just getting started. Regeneration is the buzz word here and the very soon to be released ‘Ceromonies’ album serves to draw a line in the sand, or in Carl’s words, “crystallise a moment in time”. 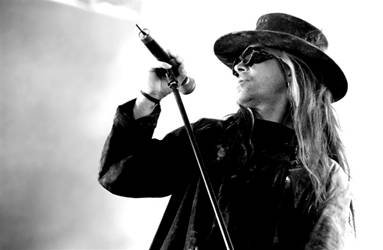 ‘Ceromonies’ is a comprehensive DVD and CD document of The Nephilim’s triumphant return that provides both a full stop at the end of another chapter and an exhilarating glimpse of the blazing flame that now propels Carl and his henchmen toward a future that brims and bulges with possibility and renewed vitality.

There are firm plans for the next releases and a mass of gigs being put together at the moment and Carl was brimming with enthusiasm about the next chapter in his impressive legacy when I spoke to him.

I asked him what he had been doing in between the release of the ‘Zoon’ album in 1996 and the rebirth of Fields Of The Nephilim in 2005 as he effectively ‘disappeared’ during that time.

“I was always doing something behind the scenes as The Fields Of The Nephilim is my life and always will be so along with revitalising, re-evaluating and restructuring, there was always something going on, it just wasn’t publicly prominent. The gap didn’t actually seem that long to me.”

“Sheerfaith was a pseudonym in the early days, just so that my name wasn’t splashed all over everything. Sheerfaith is essentially for Fields Of The Nephilim projects but we do the odd project for others here and there. Sheerfaith did everything on ‘Ceromonies’ from the artwork to the audio, everything. It was a huge job and a great challenge and we’re very happy with the end result.”

Which led us on nicely to ‘Ceromonies’, the quite magnificent live album and DVD which is released on Monday 5th March. Incidentally, ‘Ceromonies’ is subtitled ‘Ad Mortem, Ad Vitam’ (To Death, For Life) and as mentioned, it marks the closing of one chapter in Fields Of The Nephilim’s history, paving the way for what is soon to come.

“The ‘Ceromonies’ project is about crystallising a point in time which embodies magical moments created by Fields Of The Nephilim. It represents a closure and regeneration.

“It’s Nephilim as we are now and it brings everything right up to date.

“And I don’t feel as though I’ve really started yet. There’s a lot of ideas floating about at the moment and we like the fresh challenge and the opportunity to get into new territories.”

Presumably this means we will be seeing some new material imminently so I asked Carl which direction this would take musically?

“There’s a whole bunch of material to pick from and I’m always writing and putting down new ideas. We are going to release some new music later this year, perhaps a series of EP’s or possibly a new album. It will follow a natural path and I don’t consciously follow any certain direction. I craft it and let the music point the way forward. In the end, the music will say it all.”

So I asked Carl if he was finally prepared to reveal who played on 2005s ‘Mourning Sun’, as he had always been secretive about this, John ‘Capachino’ Carter being the only named contributor.

“Well nobody of any note. It was mainly myself and a couple of family members. The project was already well advanced to the stage where to get a band involved would have knocked it off course, so it was pretty much me and only me who did it. It was kind of a lonely time.”

Carl is on record saying that a set band line-up is restrictive and unnecessary so I asked him if this was still the case and whether it would remain so?

“We don’t want to be a formatted act. The original Fields Of The Nephilim line-up was really great but it couldn’t carry on as it was restrictive. We want to have no barriers, remain open minded and retain creative flexibility but if someone has something they feel they can contribute then I want to hear it.”

Fields Of The Nephilim are booked to play this year’s Sonisphere at Knebworth and I asked Carl about this, future live plans and whether he was interested in seeing any of the other bands on the Sonisphere bill?

“We only got the booking very recently so I haven’t had a chance to dwell on it yet but it’s a good slot, very suitable for Fields Of The Nephilim. It had to be suitable for us or we wouldn’t have done it.

“There are lots more gigs to come but Sonisphere is our first major festival for a while. Fields Of The Nephilim are essentially a live band and that is where we need to be. We have to be out there playing live as that is where our reputation is.

“As for other bands on the bill, well I’m not sure who else is playing. I don’t follow the ‘scene’ as such as I’d rather be putting ideas down and seeing other bands would be like a busman’s holiday. I know there is a lot of good stuff out there but I only get to hear other bands when we play on the same bill as them.”

So if someone who had never heard anything by Fields Of The Nephilim showed an interest, what would you play them as your definitive work?

“It would have to be our second album as that was the first major impression we made. And ‘Zoon’ as well.”

And finally, how do you feel the ‘new digital age’ has affected the band? Has it helped or hindered you?

“It’s progress but it can also harm you. We used to be able to play a new song live as an exclusive for the fans but nowadays the element of surprise is gone as everything just hits the internet really quickly and you are getting reviews before the songs are actually out.

“I used to love going to the record store and buying an album on the strength of one song I had heard and discovering the rest of the album but you don’t get to do that nowadays. Buying a record used to be exciting so technical progress is not always a good thing.”

So there’s a big future looming for Fields Of The Nephilim and it all begins with the release of ‘Ceromonies’ on Monday. And we will of course be publishing the aforementioned gig dates as soon as they are announced.

Carl’s closing phrase was: “Watch this space”. In the meantime, watch this rather good trailer video for ‘Ceromonies’…

Note: Since this interview was published, the release date of ‘Ceromonies’ has been delayed due to a manufacturing issue with the box-set edition. It will now be out next month and we’ll announce the new release date later this week. 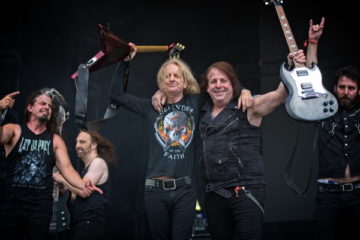