Having popped their Irish cherry guesting with Metallica last summer, Sweden’s Ghost make a swift return to the Emerald Isle with The Ultimate Tour Named Death.

Getting the nights hijinks underway was Sweden’s doomsters Tribulation. Being first on in a three band line up and especially in an arena can sometimes be a lonely and cold experience with the usual mobs wandering around looking everywhere but at the stage.

Still despite the early start and being not exactly like for like with the headliners, they ground out a majestic and mesmerising display. The seven song set all came from their last two studio albums ‘Down Below’ and ‘Children Of The Night’. And if you’re not au fait with their pedigree just think The Sisters Of Mercy with heavily ghoulish vocals sprinkled on top.

For forty decibelic minutes they unleashed their demonic fury with Melodic Death Metal belters like ‘Nightbound’, ‘Cries From The Underworld’ and ‘The Motherhood Of God’. Sonically and visually Tribulation were a triumph, they lit a devilish fuse under a few sceptics who generally tar bands of this ilk with the same brush. A perfect remedy for the winter chill.

Based on tonight’s evidence, slotting All Them Witches after Tribulation is not a fair fight. After the all action start to the night the Nashville trio’s neo-psychedelic buffet brought the momentum crashing down. The last time the band played Dublin it was the upstairs room of a pub, and tonight the dimly lit stage of the 3 Arena just swallowed them up.

Musically they didn’t put a foot wrong, the tinge of early Floyd and Sabbath on ‘Funeral For A Great Drunken Bird’, ‘Dirt Preachers’ and ‘Diamond’ were all executed admirably, but in truth they would’ve benefited better in a more intimate habitat. Another time, another place maybe. 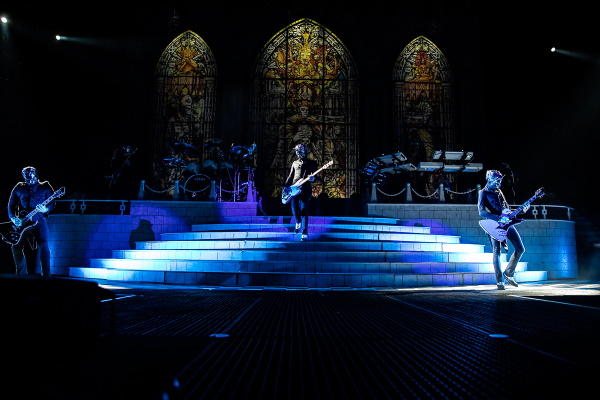 Like a salty oyster washed down with a creamy pint of Guinness, Ghost are an acquired taste, their brand of Gothic-sprinkled pop rock is completely lost on a lot of people. And the fact they come packaged predominately masked and fronted by a singer with multiple alter egos, still doesn’t sweeten the deal.

But over the past year their stock has risen considerably after nabbing the main support slot on Metallica’s mammoth Worldwired Tour. And their appearance thirty miles up the road at the iconic Slane Castle last June and other sprawling European venues has given the band an extra edge venturing into the major league of headlining arenas. 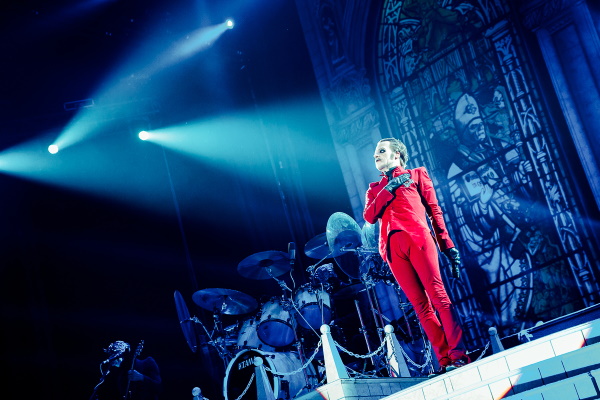 The stench of substandard popcorn and €5 rubber hotdogs is not exactly in keeping with a band who trade on the macabre. But let’s face it Ghost are about as scary as a pesky episode of Scooby Doo, and as they say in these parts “sure it’s just a bit of craic”.

But it’s not in Spinal Tap territory, there’s no mini Stonehenge with dancing dwarves or concealed courgettes. This is slickly choreographed theatrical rock, and with the exception of maybe Alice Cooper there’s no-one doing it better. 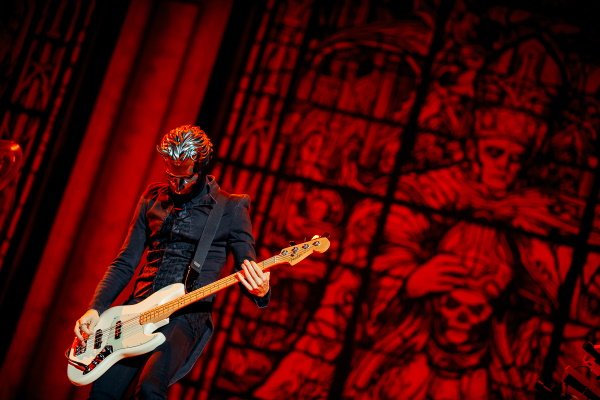 Their idiosyncratic frontman Tobias Forge, who now goes under the guise of Cardinal Copia has been steering the Ghost ship for the past thirteen years. Backed by seven disguised musicians called the Nameless Ghouls, the band’s tongue-in-cheek mission of trying to convert souls to Satan through the medium of Heavy Metal has become of one of the most visually entertaining acts on the planet. And tonight’s pomp extravaganza more than proved that.

As the house lights went down at 9pm a deafening drone engulfed the building, then a jet black curtain dropped to reveal a white stepped altar complete with an impressive backdrop of mock stained glass.

The haunting chimes of ‘Ashes’ sent a surge of the heebie-jeebies through the crowd before the Ghouls ripped into a thunderous ‘Rats’. As much as the masked ones are an integral part of the Ghost product, as soon as Cardinal Copia makes his entrance they become a mere side show.

Decked out in a snug two-piece red suit, he immediately casts his spell over his obeying disciples. And as well as being a commanding frontman his between song yapping skills ain’t too shabby either. 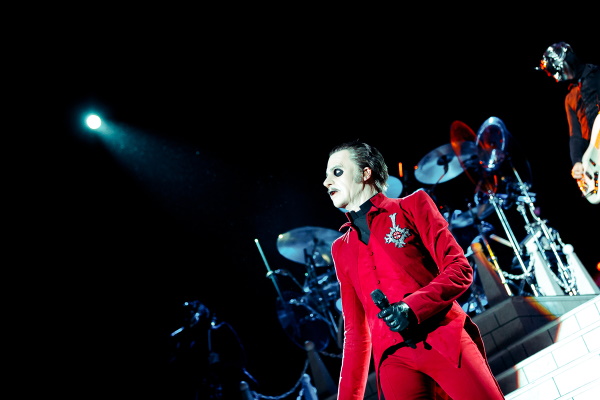 Referring to their last Irish appearance as “just a quickie” he promised tonight was the full-on real date before getting everyone hot and bothered with ‘Mary On A Cross’. Following ‘Devil Church’, two Ghouls embarked on a pretty limp guitar duel, and it didn’t improve with their painful attempt at Thin Lizzy classic ‘The Boys Are Back In Town’. But that was only a minor flaw, everything else flowed perfectly.

The appearance of Papa Nihl for the saxophone solo on ‘Miasma’ may have looked like bargain basement pantomime, but bear in mind this is a country who in recent years have become accustomed to taking the piss out of religious figures, so this hit a comedic nerve with the Dublin crowd.

That continued when he emerged looking like a Scandinavian Father Ted for the regal sounding ‘Spirit’, working the stage like a seasoned thespian. But apart from all the gimmickry, Ghost are a rock band armed with tunes that can make your bones rattle. 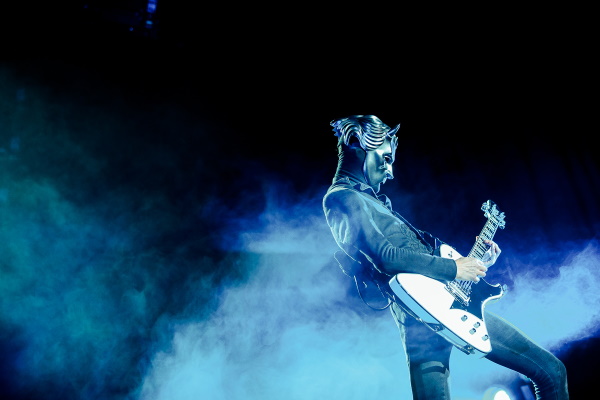 The hellish fury of ‘Year Zero’ was ramped up by bursts of fire which tied in brilliantly with the chants of “Hail Satan”. Those fond of a dip in a mosh pit filled their boots as the rampaging ‘Mummy Dust’ heralded a four-minute surge of chaos.

The night ended in blaze of melodic glory, first up the slick Euro-pop shape thrower ‘Dance Macabre’, then the horns were raised for the mother of all finales as ‘Square Hammer’ turned this converted train depot into a letting on church of devil worship. The Cardinal and his ghoulies took their bows to the soothing sound of Emmylou Harris’s ‘Sorrow In The Wind’, a beautiful end to an evening of jaw-dropping pageantry. 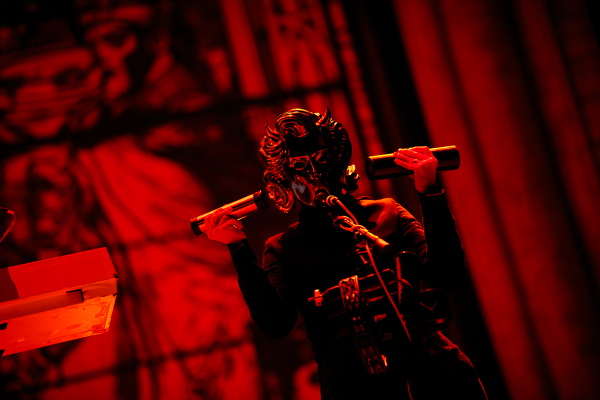 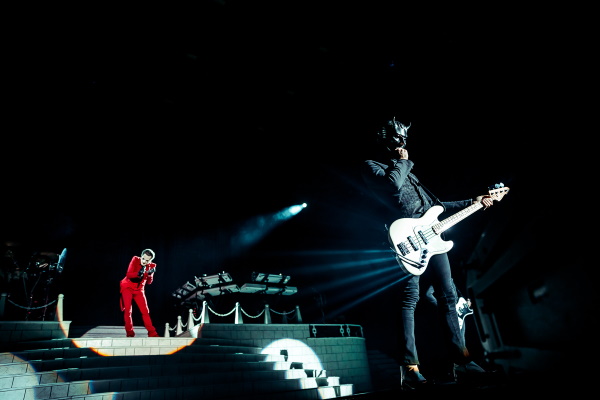 FROM THE ABYSS: GOLDEN CORE RETURN WITH THE STUNNING 'FIMBULTÝR'