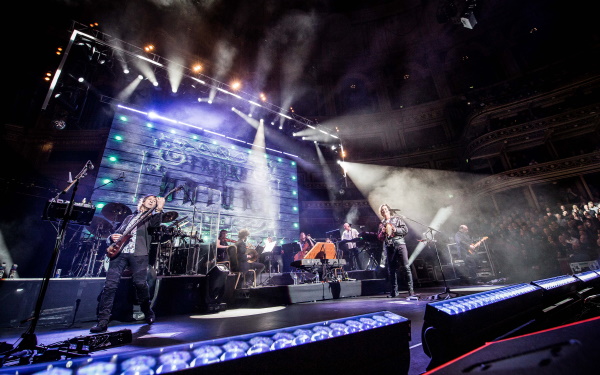 Marillion first played the Royal Albert Hall in 2017, appearing with a string quartet, another first. It was intimate and inspiring, and the DVD is essential viewing, perfectly replicating the sense of occasion and how to get the most out of this venue.

Marillion – With Friends from the Orchestra

Two years later and the innovatove prog-rockers are doing it again, this time as part of a thirteen date tour. Tonight is the final stop in the UK before heading off to Europe, and the second of two nights at this prestigious location.

On first entrance it looked like tonight was going to take a different turn to yesterday as the chairs in the arena had been taken away and an excitable throng had gathered at the barrier. The setlist has had some movement too over the last few weeks. In the end all of the songs played on the tour so far appeared over the two nights, rewarding fans who were attending both.

This time without the pressure of filming it was a much more relaxed and looser band but still, Marillion really know how to put on a show. Frontman Steve Hogarth looked completely at home, like this is his new living room. The line-up has now been unchanged for thirty years as of this year and with many of the fans staying the course as long or longer, the sense of family is palpable, while the band remain accessible and inclusive.

Billed as ‘Marillion with Friends from the Orchestra’, it was a welcome return for the string quartet In Praise Of Folly, augmented with French horn, trumpet and flute, staying for the whole gig this time. Several classic Marillion songs have been reworked for the companion album, a concept previously tried for 2009’s ‘Less Is More’. Although very different in style, both albums proved that the songs stand up in their own right and seem to enjoy wearing different outfits. 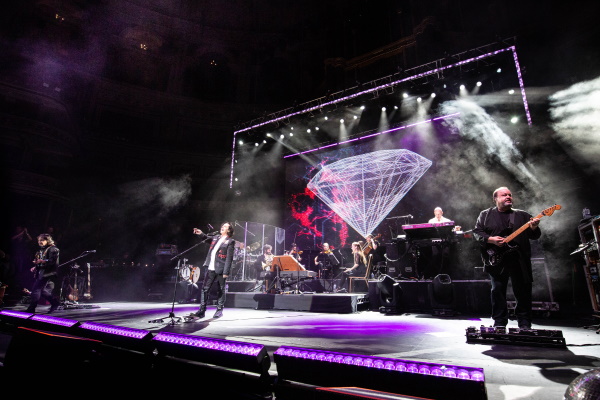 Don’t be fooled into thinking that the presence of the string quartet meant that tonight was going to be a genteel and mellow affair however – the setlist is full on and powerful from the start. The show opened with ‘Gaza’ as h appeared in the stalls singing the opening verse, before making his way to the stage, where the drama intensified.

There’s all the familiar Marillion elements here tonight. Big powerful rhythms, technical wizardry, huge epic songs that go on long journeys, many based on real life events, and containing many movements– just when you think a climax is about to be reached, there’s a shift in tempo and style and the pleasure is prolonged.

The orchestra shone on the emotions of ‘Fantastic Place’ and ‘Estonia’, however were occasionally buried with the rest of the band for large parts, especially on ‘Season’s End’ where they were almost undetectable until the finale. The re-workings are really gorgeous though, the songs not on the album also receiving new arrangements for this tour.

‘Ocean Cloud’ was beefed up dramatically, enhanced by a stunning backdrop. ‘Hollow Man’ and ‘The Great Escape’, detached from the concept album ‘Brave’ had a huge impact when isolated from their original context. You don’t need to know anything about the songs to enjoy this show however, in turn soothing, disturbing, thrilling and only occasionally losing pace. 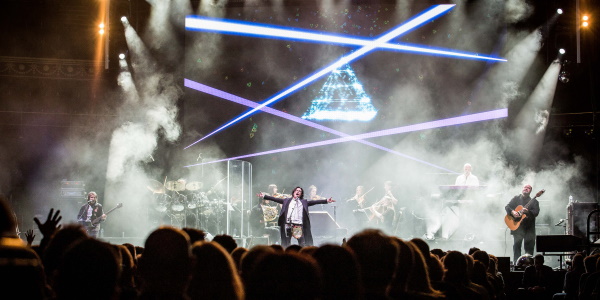 A stunning version of ‘Separated Out’ appeared for the encore, mashed up with Led Zeppelin’s ‘Kashmir’ got the whole crowd on its feet. The encore game could have gone on all night according to h, who explained that the band would like to do four encores but “the venue charges £1750 for every minute past eleven, which frankly makes us nervous”.

Rightly so as the final song racks up at well over fifteen minutes, the autobiographical ‘This Strange Engine’, for an explosive finish.

A Marillion show is an extremely effective form of therapy. We make our way home in this freezing cold night, basking in the afterglow, hoping that the Royal Albert Hall becomes a regular tour fixture for the future.

Afraid Of Sunlight
Zeparated Out

Previous articleMÖTLEY CRÜE TO TOUR WITH POISON AND DEF LEPPARD IN 2020
Next article‘SOMETHING STRANGE IN THE NEIGHBOURHOOD’. GHOST SERVE UP A CHILLER IN DUBLIN