The bloke who has the best pipes in the biz, Clutch frontman Neil Fallon, is in awe of his Roundhouse surroundings. 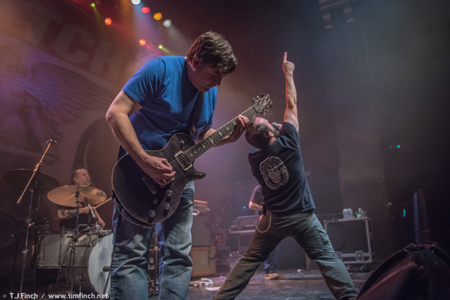 “We’ve played thousands of shows and this is a very unique building. It’s a cool spot – not a bad seat in the house. The history and seeing the people that have played here in the past lends energy to this amazing space.”

And a super tired Fallon needs all the energy he can muster as Clutch come to the end of their 2016 World Tour promoting their eleventh studio album, ‘Psychic Warfare’. I ask for a cheeky insight into what is on the setlist and Neil laughs and says he leaves all that to Tim. 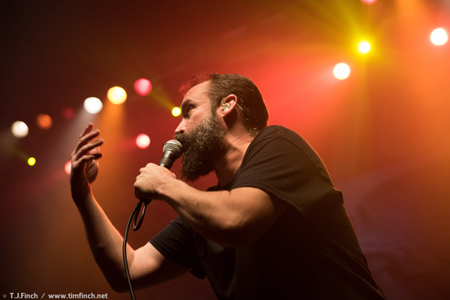 What he’s done is check back to the last time Clutch played at Brixton and totally made it different from that. This makes me very excited as to what we’ll experience tonight. I ask Neil how he’s feeling about the gig and he laughs:

“I am knackered but that doesn’t preclude me from loving what I do. At the end of the day I only had to do two things, apart from washing the dishes, and that is to write and perform rock’n’roll. That’s what I’ve done with my life and it’s a very humbling and gratifying position.”

Neil loves the fact I’m a bit old school like him – preferring to jot down my scribblings using a pen and pad. That’s how he writes, he states:

“Even if I don’t know how it will end up, these things fall out of the sky and I end up jotting them down or recording them to my phone but usually it’s on a pad of paper and my basement now looks like the office supply store of a crazy person packed with half used notebooks. There’s something tactile about writing into a book and you can also doodle and cross reference with other books and believe it or not it’s much faster doing it that way than on a computer.” 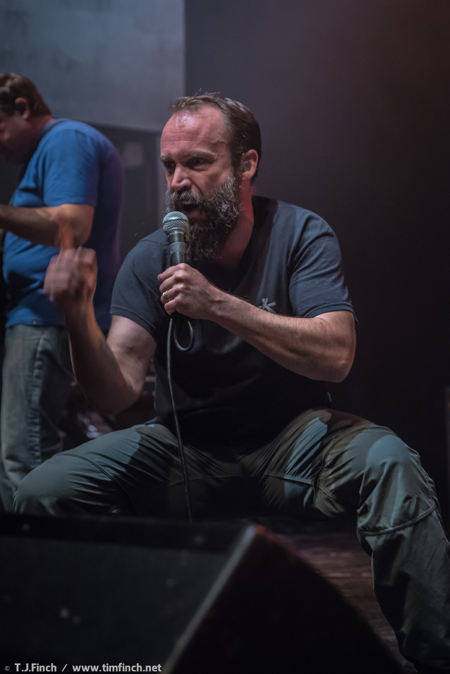 And talking of his incredible storytelling lyrics, Neil says it’s fun to write songs and cites himself a professional liar:

“I don’t know a lot about hotrods and UFO’s but I sure like to write about them.”

This album came about slightly differently than to other Clutch classics as the vocals were recorded first and then the band filled in around them, choosing to rehearse and rehearse each song until it was ready for a take. I ask why they chose to do it this way and Neil reveals:

“We realised that when we started out people were still recording onto tape and then the digital world took over and that provided us with great luxuries but those luxuries can be dangerous – you can do a lot of things on a hard drive that aren’t reality based. You can paint yourself into a corner very quickly and we’ve also learned that is there is no substitution for rehearsal.

“That’s when you stop worrying about what’s coming next and you start emoting the parts. That’s when the cool little details happen. For once, I got my lyrics done ahead of time and Jean-Paul was able to listen to them and accentuate and play around that and that makes for a much more dynamic song than if you do it the normal way which is put down the bass and drums, then the guitar and then pop the vocals on top but then six months later when you are playing it live you wish you’d done it the way we just did by rehearsing.” 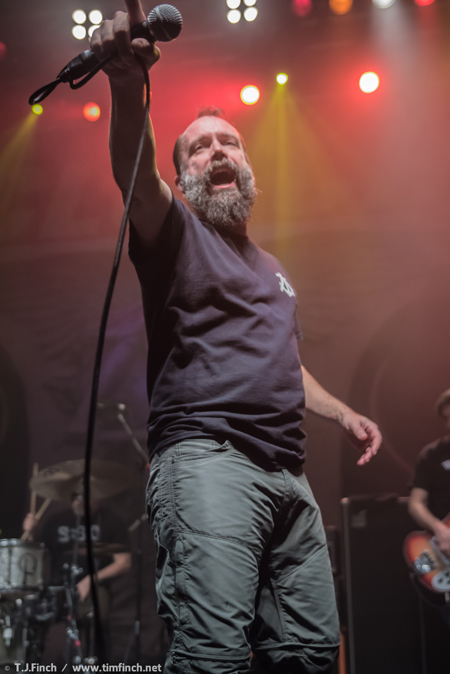 As a telly producer I love the visuals and Clutch always give good video, mmy favourite being ‘Quick Death In Texas’ and it’s Neil who comes up with the quirky concepts and he who realises them:

“We had this director, Dave Rodski, who does a lot of extreme Metal and only had a day to do it as we had no time. So we filmed it in sixteen hours, not in Texas as we couldn’t get there, so in New Jersey at an old fashioned Western arena.

“Back in the 50s when we were all into Westerns, they built a bunch of these places and it was almost like being in Westworld. This one is one of a few left, which was passed down by family. We came up with the concept as a band and our idea was way over the top so Dave helped us dial back. We couldn’t have done it without the stuntmen and I can’t lie, it was great to play cowboy again – it felt like I was eight-years-old again.” 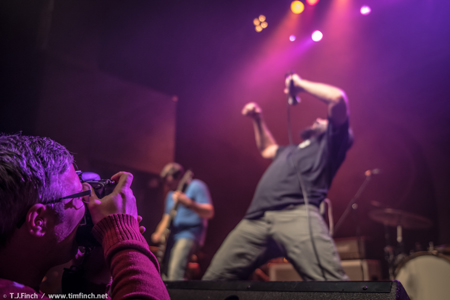 Next up is my cheesy question (sorry) as ‘Psychic Warfare’ is all about predictions and X-ray vision. I ask what do Clutch foresee for themselves during the gig? Neil politely chuckles:

“Well as I don’t know what the setlist is tonight I’ll just wing it. This show sold out fast and it’s a big room and London was the first town that blew open for us. It’s gratifying to do this. We have our own label and we book our own tours and it’s really all because of the fans. I’m really knackered right now but as soon as I walk out and see their faces, I get the ultimate adrenalin rush.”

Clutch are supported by labelmates Lionize and I ask how the union is going? Neil is thrilledV:

“They are such a great band and they are doing this tour DIY style and we want them to succeed in their own path and they have been really doing well on this tour and it’s a real pleasure to watch.” 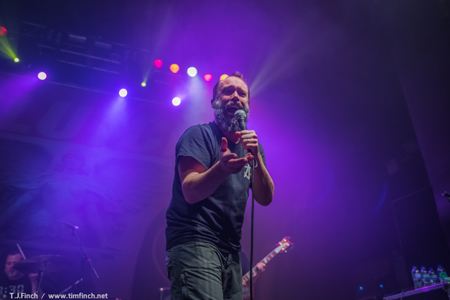 “As of January 1st we are going to stop touring for the first quarter of the year and cool our heels. I’m going to go on a diet and not eat pizza and drink beer every night. Well maybe just once or twice a night.

“Then we’ll start kicking ideas around for the next record. We’ll look to record this time next year and put out an album in mid-2018. That sounds like it’s far away but it’ll come up real quick. So we need to clear our ears out a bit and then get writing. We’ll also do a few festival shows like Download and Europe.”

Being together as the original line-up for over twenty years, it must be great being in Clutch. Neil confirms:

“It is. When we first started in Clutch I took it for granted and then I realised what a special and unique situation we are all in and to be able to make a living doing something creative is pretty special and I know loads of people who can only be creative at the weekend and I remind myself that we need to appreciate this.

“I have more fun now than twenty-five years ago when I was twenty-two and I do hope that’s a trend that will continue.” 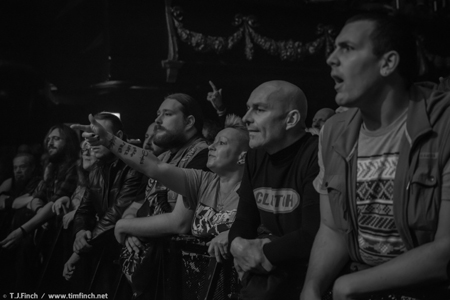 ‘Hell yes’ to that and tonight’s performance is super charged Clutch. There are more beards in the crowd than at a Canadian lumberjack convention and as the four-piece take to the stage, it’s a well oiled Clutch experience for this sold-out crowd.

Solid 50s style drums courtesy of Jean-Paul, the dirtiest guitar sound ever thanks to Tim and those badass basslines from Dan. Neil certainly has perked up and shouts to us all” “Oh my goodness, look at you all – this is going to be a lot of fun”. And fun it bloody well was and what an apt song Tim has picked to kick off the Clutch affray with ‘The Mob Goes Wild’, straight into ‘Struck Down’ then jamming into ‘50,000 Unstoppable Watts’, where frontman Neil stomps up and down the huge Roundhouse stage, delivering his storytelling like the raconteur he is.

“There’s a lot of people here – it’s making me nervous,” he shouts. Quickly into ‘Firebirds’ and then ‘Immortal’, then it’s time for the newie, ‘A Quick Death In Texas’, serving us a huge slice of tongue in cheek cowboy capers. 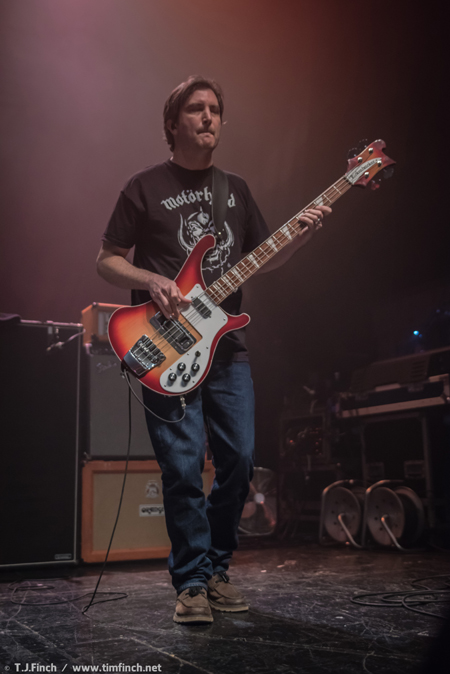 Up next is ‘The Face’ and the drums are the goolies of this band and they keep on driving building the crowd into a massive pool of bodies. By now the t-shirts are off, the mosh pit is now gargantuan and the beards are a-shaking!

Then it’s onto ‘La Curandera’, ‘Noble Savage’, ‘Cypress Grove’, ‘The Regulator’ and by the time they get to ‘10001110101’ it’s time to take a breath and introduce Lionize keyboard player Chris Brooks. Neil tells us:

“Here’s a song we get a lot of requests for but we can’t do as we don’t have a keyboard player – but we can tonight.” 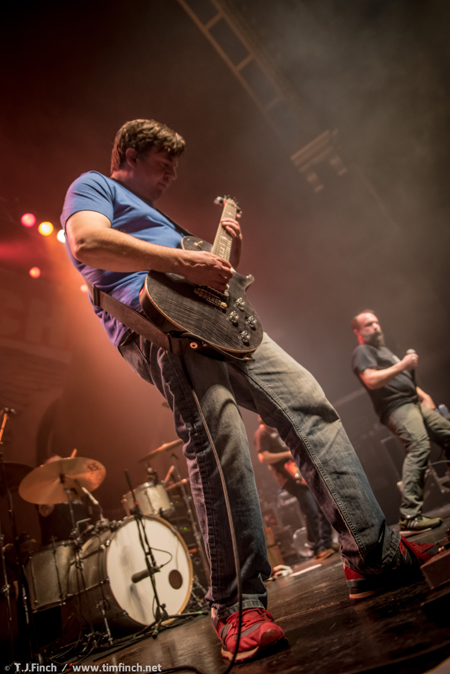 Brooks stays on for the ultimate superjam song, ‘Escape from The Prison Planet’, and as Chris exits the band go on to blast out ‘Spacegrass’ and ‘The Wolf Man Kindly Requests…’, then it’s encore time and my anthem of the century, ‘Electric Worry’, and finally ending the whole Clutch shebang is ‘X Ray Vision’ which is such a catchy, Clutchy number everyone already knows all the lyrics.

Clutch came, they conquered, and claimed The Roundhouse. Only one pint deducted and that’s because the soundperson didn’t turn up Neil Fallon’s vocals enough. His twenty Marlboro a day larynx and his legendary lyrics deserve to be heard loud. Next time take Clutch up a gear and turn Neil up!