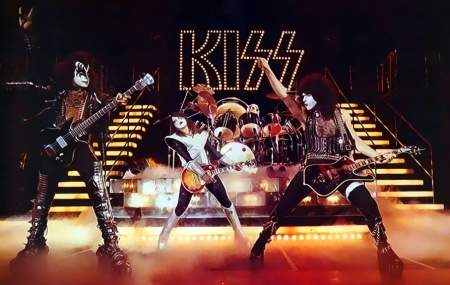 In the previous article we looked at other band’s songs that Kiss had covered on their records over the years. In this article we’re going to look at some Kiss songs that sound a bit like songs by other bands.

I should first of all make it very clear that I am not saying that Kiss ripped off other people’s songs, only that some of their songs were probably influenced by previous songs they had heard.

That’s the same for all bands and artists. There are only seven different notes in a Western major or minor scale. There are therefore only a limited number of variables with this format. Also within that format there are certain notes or chord sequences that sound good together and some that don’t. This will further limit a songwriter’s choice of the next note or chord to play.

Similarly, lyrics do usually have to rhyme and there are only a limited number of words in the English language that rhyme with each other. As the most common topic for rock and pop songs is lurve, only a limited vocabulary can be used. It is inevitable then that more than one artist has rhymed ‘baby’ with ‘maybe’, ‘love’ with ‘above’ and ‘go’ with ‘no’ or ‘know’. But every time I hear an artist rhyme ‘higher’, ‘fire’ and ‘desire’ together in a chorus it drives me a little closer to despair.

Another point is that we’re all influenced by our heroes. It’s no co-incidence that the drum part for ‘Who Wants to Be Lonely’ is a similar rhythm to that of Led Zeppelin’s ‘Immigrant Song’. Eric Carr and the whole band were Zeppelin fans and it’s a great groove that works well with both songs. As with melodies, chords and lyrics, there are only a limited number of rhythms and drum patterns that work well on a rock 4/4 format.

So we see that similarities between rhythms, melodies, riffs and lyrics will happen from time to time. It can’t be helped and literally everyone does it. Jimmy Page and Robert Plant seem to spend their whole time in court as one plaintiff after another claims that Led Zeppelin ‘stole’ their song, yet none of us would deny the unique and ground breaking effect that Zeppelin had on modern rock and the riffs that followed from them.

There is also the point that many songs are genuinely unconsciously ‘stolen’ from other artists. How often have we all had a little tune stuck in our heads all day and not been able to figure out what it was? Sometimes we can never work out where that tune came from. Other times we later remember it’s an irritating song off the radio or a TV jingle.

When that happens to a songwriter, they think they’ve come up with a moment of inspired genius. They start by humming a little tune to themselves, put some words to it that seem to fit and hey presto, he or she has written a song!

As I’ve said, everyone does it. Have a look at this compilation of songs that are similar to each other in all eras and genres of pop and rock music.

So now we see that everyone has songs that are inevitably similar to other people’s songs and are not in fact as blatant a rip off as they may sometimes first appear. Let’s see some similarities between Kiss songs and other earlier songs.

When I got the ‘Asylum’ album on its release in 1985, that was when it first occurred to me that Kiss had outside musical influences in their song writing. Up until that point, as a naive teenager I truly believed that every Kiss song was a divine creation, inspired only by their own individual creative genius. When I heard ‘Radar For Love’ it became obvious even to me that they had been very influenced in the verse by Led Zeppelin’s ‘Black Dog’.

Paul Stanley is quoted as saying that he wrote the song ‘Love Gun’ from an idea that he came up with on a plane on the way to Japan for a Kiss tour in late 1976. It may well be however that he partially remembered a blues song called ‘The Hunter’ which had been played by two of his favourite bands, Free and Led Zeppelin in the early 1970s.

The chords used in ‘The Hunter’, particularly in the pre-chorus section of the song, are very similar to those in ‘Love Gun’, as are the lyrics:

LOVER HER ALL I CAN – OPEN MY EYES

Paul Stanley has been quite open about the similarities between ‘Love Her All I Can’ on the ‘Dressed To Kill’ album and a Todd Rundgren song called ‘Open My Eyes’.

Paul is quoted in David Leaf and Ken Sharp’s book, ‘Kiss Behind The Mask’, as saying;

“It was inspired by The Who and Todd Rundgren’s old band, the Nazz. They had a song called ‘Open My Eyes’, it’s basically the same intro, we kind of copied them.”

COMIN’ HOME – WHAT’S ON YOUR MIND?

This comparison is especially funny as in this case it appears that Ace Frehley ‘steals’ his own song!

I LOVE IT LOUD – WE’LL BRING THE HOUSE DOWN

Slade’s 1980 top ten hit single ‘We’ll Bring The House Down’, has a very similar opening chant to the Kiss anthem ‘I Love It Loud’ from their 1982 album ‘Creatures Of The Night’. It’s only a chant, there’s no lyrics, no instrumental chords and the melody is not identical but it could well be that Gene had it in the back of his mind when he penned his idea for ‘I Love It Loud’ with Vinnie Vincent a year or two later.

There are several similarities between the lead single from 1980s ‘Unmasked’ album and a Bruce Springsteen song fully titled ‘4th Of July, Asbury Park (Sandy)’ on his 1973 album ‘The Wild, The Innocent & The E Street Shuffle’. The two certainly are not the same song but they do bear commonalities in the basic guitar figure, the chorus melody featuring the repeat of ‘forever’ and of course the name of the girl in the song, Sandy, was cunningly modified to Shandi by producer Vini Poncia for the Kiss album.

Also the opening guitar part and verse chords of ‘Shandi’ do seem to be very similar to a Joe Walsh song called ‘Tomorrow’.

This is a curious one in that Kiss have been very open about how the song was written. In the Kiss boxed set is Eric Carr’s original demo for the song which later became ‘Little Caesar’, Eric’s only original lead vocal on a Kiss album which ended up on the ‘Hot In The Shade’ album. On the demo version he is heard singing the Marvin Gaye song ‘Ain’t That Peculiar’, over the backing track.

Gene Simmons explains in the Kiss Boxed Set booklet notes: “‘Ain’t That Peculiar’ was a song idea that Eric Carr brought in but it was too similar to another song so it might be better if some of the lyrics were changed.”

It is certainly not a normal way to write a song, knowingly basing it from the outset on another existing song then re-writing the lyrics but it seems that is what indeed was done in this case.

NOTHING BUT A GOOD TIME – NEVER ENOUGH

This is a double case of, if you take mine, I’ll take yours. The verse chords, melody and even bass slides on the Kiss song ‘Never Enough’ on the ‘Sonic Boom’ album are very similar to those on the Poison song ‘Nothing But a Good Time’. That particular Poison song had been on constant MTV airplay during the late 1980s so Kiss and everyone else in the known universe would have been aware of it, at least subconsciously.

The funny part that is that the guitar introduction to the Poison song is clearly taken straight from Paul Stanley’s opening riff in the Kiss song ‘Deuce’. In turn, Paul Stanley commented in the Kiss Boxed Set booklet notes that “the beginning of ‘Deuce’ was me ripping off the Raspberries, bastardising ‘Go All The Way'”.

This song on the most recent Kiss album, ‘Monster’, was written by Gene and Paul and sung by Eric Singer. It bears a number of remarkable similarities to a song of the same name by the 1970s New York band, Tuff Darts. The similarities include the overall chord structure, the verse melody and of course the entire chorus.

You could go mad trying to find all the similarities. In fact if you listen closely enough you’ll find yourself hearing and then dreaming up all sorts of coincidences. Does the chorus of ‘Dreamin” sound a bit like ‘I’m Eighteen’ by Alice Cooper? Is the verse of ‘Tomorrow And Tonight’ from Mott The Hoople’s ‘Golden Age Of Rock And Roll’? Can I hear the riff from T-Rex’s ‘Get It On’ being played in the verse of ‘Mr Speed’?

Just remember though, everyone is doing it all the time. Kiss were not the only musicians to have re-used an idea that someone else had before and they won’t be the last. What Kiss added to the music, even if some of it was influenced by others, was something that no other artist had ever had on their first versions – the passion and performance that makes Kiss the hottest band in the world!

Thanks very much to David Ryder Prangley for suggestions to help this article. He didn’t write the article. It’s my article, I wrote it. I just based some of it on a few ideas that I’d heard from him before…