It was another drink, completely blind last night at Nambucca in London as The Carouser Magazine launched Issue 8, The Idol Issue, celebrating the life of Lemmy and other favourite idols.

The Carouser is a drinks magazine and website that celebrates the rock’n’roll lifestyle, giving you an alternative guide to London and this particular issue is sponsored by Motörhead Road Crew beer.

Motörhead Road Crew beer Brand Ambassador Simon Ritson drove like a maniac from Newcastle and duly arrived with the very first cases of the good stuff. A case was given to Global Brands who represent Motörhead, another to The Carouser founder Mandy Morello and Simon also delivered samples to London bars Slim Jim’s and The Porterhouse.

Jody Turner of Rock Goddess was also on hand and was presented by Steve with the bottle top from the very first Motörhead Road Crew beer to be publicly consumed.

Steve commented: “Being given the honour of pouring and drinking the very first bottle of Motörhead Road Crew beer to be publicly consumed, and from the official glass too, might just be the most special thing that has ever happened to MetalTalk and the words to describe what an honour it was just don’t exist.

“Maybe it will all sink in, once the hangover clears. It’s a superb beer and you’re in for a treat once it goes on sale next week. You’re definitely in for an aftershock with this bad magic.”

Camerons worked closely with Phil Campbell and Mikkey Dee to produce the American style session pale ale which will be available from a week today in keg, cask and bottle and has an ABV of 4.5% and 5% in bottle.

Simon Ritson said: “We did four trial brews in total, just to get the recipe absolutely right and the bottling was done yesterday, Wednesday. It was a great night tonight and so good to see the beer being appreciated by yourselves.”

​I just love the life I lead…

Mikkey Dee previously said: “I’m proud to have been able to develop this beer with Camerons. The trials we have tasted have been great. We wanted this to be an exciting and refreshing brew which is for you, our Road Crew.”

Phil Campbell added: “It has been great fun working with the guys from Camerons on this beer. This is going to be an excellent beer for all Motörhead and rock fans around the world to enjoy.”

Camerons Chief Executive Chris Soley says he was delighted to work with the pair as it was his mission to do justice to the Motörhead name and Lemmy. He said: “Our primary objective was to create a fantastic tasting beer underpinned by the Motörhead branding.”

Stand by for much more on Motörhead Road Crew beer, including a competition and full details of how you can obtain your first taste of this great beer. It will be available here on MetalTalk from next week, along with the full range of associated merchandise.

The Carouser was born in 2013 as an anti-magazine due to the lack of good information about booze and places to go in London with a strong focus on the music scene. The online magazine became fully established in May 2014 and The Idols Issue can be found here.

Last night’s launch party also included a performance by Ozzy OzzSpawn, London’s top Ozzy Osbourne tribute act who brought the house down with a tremendous run through of Ozzy classics.

CLUTCH'S NEIL FALLON REVVED UP AND ROCKED THE ROUNDHOUSE 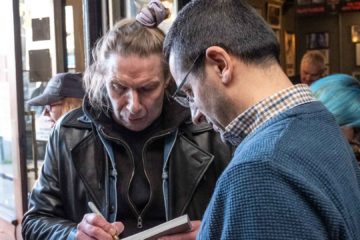