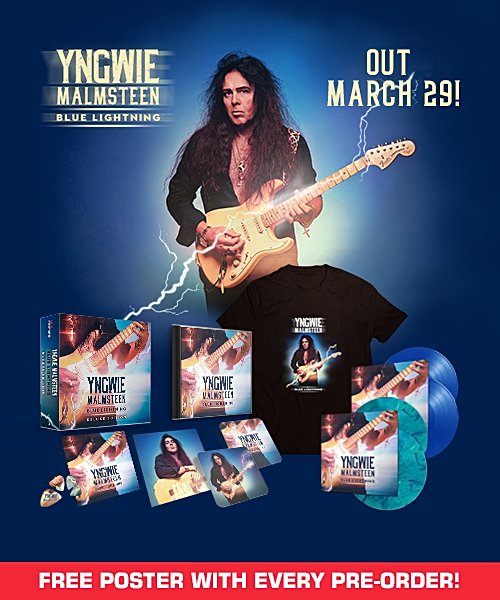 It’s the blue way for Yngwie Malmsteen as the viking of the fretboard announces new album ‘Blue Lightning’, his homage to the blues and rock giants who have inspired home over his forty year career.

There was a riot in the dungeons at the Courthouse when MetalTalk’s Andy Rawll cross-examined the viking god of lightning fast guitar downstairs at this one time central London magistrates court.

Infamous as the venue for many significant trials (before its conversion to a hotel in 1998) including those of Oscar Wilde, Christine Keeler, Keith Richards and John Lennon, this was the perfect location to secure a no holds barred testimony from the musician that first revealed his furious, yet highly-melodic neo-classical style over forty years ago with the pre-Shrapnel ‘Powerhouse Tapes’.

As the hotel unleashed the lattes, the amiable Swede spoke of inspirations and influences as well as projects past, present and future. This included a forensic appraisal of his forthcoming album ‘Blue Lightning’, as part of newly struck deal with Mascot Label Group and released via their Mascot Records imprint on 29th March 2019.

Yngwie’s testimony includes evidence that he was responsible for turning an Iron Maiden into an Iron Butterfly; how he almost joined UFO; when he jammed with Gillan and Purple; his fondness for a bit of ZZ and DC; how Vivaldi inspired both the current and next generation of the Malmsteen dynasty and how he’s having the tone of his life with his latest arsenal of signature amps, pedals and guitars.

In passing live sentence for putting most other guitarists to shame, the genial and genius musician was found guilty as charged, but escaped the possibility of a return to Alcatrazz.