A quick wander around the town of Horsham and marvelling at the intriguing sculpture in its centre followed by a stodgy greasy fried breakfast, we dumped our stuff on the bus, hopped in, settled down in our respective seats to the sound of Dream Theater.

Due to the slight disorganisational state of packing and housekeeping of the van and sometimes band members, Mr Grav (chief van cleaner) and The Glorious Leader Tony were missed sorely. I was promptly allocated the role of cleaner with Luke (vocals) volunteered to be chief packer. Eddie and Chris were sharing the roles of ‘the drive’ and navigator. Joe and Matty sat listening to tunes and all was sorted.

With the weather dreary and sad news of both Scott Colombus (Manowar drummer) and Sue Lewis (fellow journalist/Rock Chick Promotions), the day had a sombre feel to it.

After stopping off at PHD in Oxford we set off to Bristol. In an effort to lighten the mood, Family Guy was put on the onboard television. Admittedly, the mood lightened. 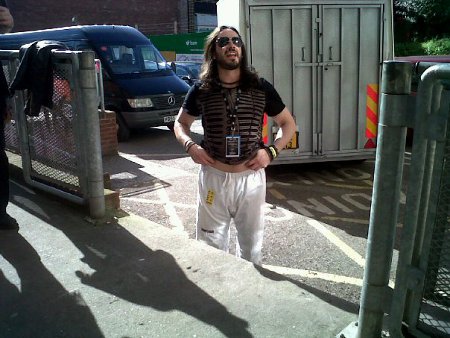 Chris limbers up in sexy leggings

By the time we arrived at the O2 Academy in Bristol at 3.00pm, the weather was pleasant and all was good. Loading in wasn’t easy as the bands were performing in the topmost room, which involved carrying the kit up at least six flights of stairs. That was a wake up call for the muscles, I tell you.

I got busy setting up the merch stand whilst the others got busy tuning instruments, setting up the drums and finding the dressing room which was seriously not easy. I don’t know if any of you have either been or played there, but it’s like a rat run or a maze! Certainly an interesting layout.

Soundchecking was in progress, so time to relax for all.

Various toilet visits and wanderings to Bristol’s oldest pub for coffee ensued. We all met back up to listen to the Mike Monroe boys do their soundcheck. To be honest, it seemed that feedback would be an issue, along with monitor trouble, which Ginger did not seem to happy about and voiced this to the sound engineer.

A blast on his shiny red sax, along with some tweaks of the sound, Michael and the guys seemed merely satisfied and wandered back to the bus.

Stationed back at my desk, now with camera in hand, as a decision was made earlier for me to take pictures of the bands sound checking and performing as the stall is obviously dead during these periods.

The crowd meandered in and gathered at the front by the barriers, awaiting the fun to begin. It was great to see so many Voodoo Six t-shirts amongst the throng of Michael Monroe ‘Sensory Overload’ wearers.

NYAA came on to the stage, this time adorned with flowery boas straight out of Hawaii, string lights on the mic stands and joined by literally a couple of dummies. Pyschadelia rock indeed by the young Bradford lot.

The lighting wasn’t great on stage for the guys but they put on a solid performance with rocking riffs and nice little melodies taken straight from Marc Bolan’s inventory. Shame for them as I don’t think the mainly glammy crowd got the music but they got a nice reception. 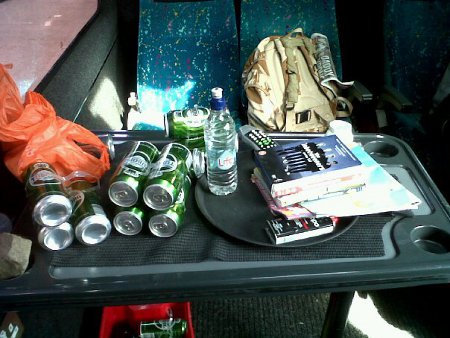 Day 2 in the Big Brother van – sure someone would have something to say about this – quick! Clean up!

Next up were the Voodoo guys who received a cheer from the fans. I pushed to the front to take my place for photos. The lighting on stage was still dark so it was quite hard for photos with red and blue lights and no white.

Turning around to check out the now squished crowd I saw a couple of familiar faces hailing from my part of the Welshy valleys, which then turned into a ‘Welshy invasion of the English’ with many a quip.

On stage, the boys blasted in with ‘Take The Blame’. Loving the rocky rhythms and grooves emanating from the twin guitars of Chris and Matt and beats provided by Joe on drums and Ed on bass, the attendees soon started wiggling, coerced by frontman Luke.

Halfway through the set I headed back to ‘do my job’, which was a lot harder than it had been getting to the stage due to the crammed audience rocking away.

Ending with ‘Long Way From Home’ the guys did a great job and with more people enquiring about the band, I can safely say more fans have been converted over to The Voodoo.

With many breaking to the bar or for a quick smoke, the excitement started to build into a buzzy atmosphere for Michael and his band to grace the stage. The crowd was a good mix of the older generation who remembered fondly the Hanoi Rocks era and young fans who had obviously been educated by their parents and were attending to see what the fuss was about.

There was noticeably more of the female ‘short shorts’ and skinny tops with various glam hair cuts hoping to attract the still attractive frontman.

Lights dimmed and the throng moved excitedly back to the stage, fighting for a prime spot. The intro started and cries of delight roared into the air as the troupe energetically bounded on. I’m not sure if they swamp a case of Energy drink before they go on, but they sure do go for it.

The tightness of the band was evident and under the lighting and strained sound, the guys played like they were in an arena. That’s professionalism for you.

Fans were clearly enjoying the set, cheering, rocking and all eager to get a glimpse of the band members who were strutting their stuff as much as they could on the small stage.

Due to a curfew, it was an early finish, so at 10.30pm the lights dimmed again and the crowd dispersed.

Pack up time and van loaded by 11.00pm, we headed to the Lodge at Tiverton, ready for Wednesday’s gig in Exeter.

An uneventful journey with ‘The Inbetweeners’ for entertainment. It was pleasant until we arrived at the hotel, only to find that poor Ed’s bag and coat was not amongst the stuff. After a frantic call to the Bristol venue, sighs of relief from all came as both bag and coat were on the way to Exeter, courtesy of the Michael Monroe camp – IDIOT CHECKS, PEOPLE, PLEASE.

So, excitement over, we turned in for the night. 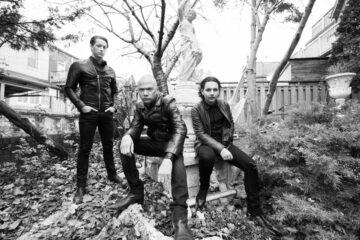