Danish Metal Rock ‘n’ Rollers Volbeat released their new album, ‘Rewind Replay Rebound’, in August and after a successful stint in the US with Slipknot and are now out on a headlining tour around Europe.

MetalTalk caught up with bass player Kaspar Boye Larsen before their show in Glasgow.

MetalTalk: This is the second date of your European tour. Now that you’re headlining are you taking the chance to pack the set with new songs?

Larsen: “Yes, we play a lot of new songs. We tried them out yesterday for the first time, four new songs we haven’t played live before. It was a little rusty but hopefully it’s better tonight [laughs].”

How are you feeling about playing new material, now you have the chance to include it?

“I love playing the new material because we’ve been playing the previous record. We’ve been touring with that for three, four years.

“We recorded the new album in December last year and it’s very nice to finally get to play the songs live.

“We haven’t been able to play them, only one song maybe, so now we can finally get to play these songs we worked so hard on.”

Do you have any favourites, any songs you’re particularly looking forward to playing?

“We’ve been working so hard on them but I really like a song like ‘Last Day Under The Sun’. ‘Pelvis On Fire’ too, that’s a fast Rock ‘N’ Roll song and we haven’t really done that before. 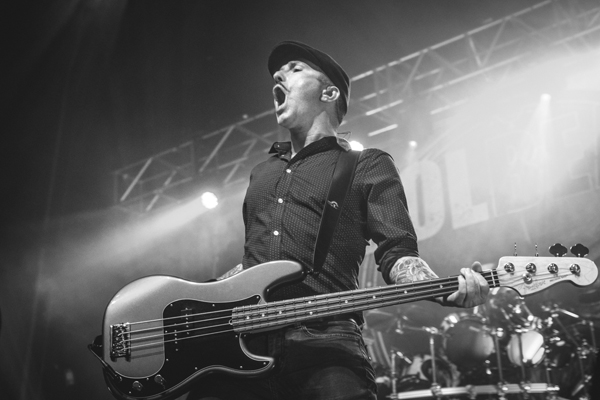 So this is the first time you’ve been involved in the song writing process. How did that go?

“That went fine. Michael [Poulsen] is the main song writer. He comes up with a riff, or maybe a whole song then we’ll go to the rehearsal room or make some changes and just get it together so that it sounds like us.

“For some songs it can take hours, even days in the rehearsal room but for other songs [snaps fingers], it’s there, there’s nothing really to do.

“Songs like ‘Last Day Under The Sun’ we spent a lot of time getting the right tempo, the right chords and everything, one reason I like playing that one!”

Are you able to influence the song writing, to bring something to the Volbeat sound?

“I think so. Even though it was my first time being part of the song writing, so of course you’re not yelling a lot about all of my ideas, I told them if I had an idea and they were used.

“Maybe for the next time I’ll speak up more.”

The bands that you were in before Volbeat were heavier, were you looking for a change of direction?

“We played Death Metal back in the nineties and I’ve been playing hardcore Punk and Metal ever since.

“Volbeat is way more like regular Rock music. I was a little nervous about it actually, because this is chord based, not so much riff based so I needed to do some interesting bass lines.

“I was mostly used to just playing what the guitar was playing, but I think it worked out OK.”

“I had a lot of help from Rob [Caggiano]. We worked a lot on the bass lines together. I had a lot of ideas, and some of it was maybe a little too much.

“We made some demos of the songs, half the album maybe at first and I went to his place and we sat there working on the bass lines which was great for me.”

What are your own musical influences?

“I started off with The Cure and The Smiths and stuff like that, I’m still a big Morrissey fan.

“From there I got into Punk and Hardcore. I come from a very small town in Denmark so there were no punks and no people playing hardcore, but there was a bunch of people playing Death Metal, so I gravitated towards them.

“You end up getting together with the people who listen to alternative music and there weren’t so many in that town [laughs].”

“So that’s how I started out, but I still listen to a lot of alternative, indie kind of music and punk and hardcore.

“Of course the occasional Metal, Death Metal kind of thing but actually not that much. I’ve always been more into hardcore.

“I discovered Black Sabbath quite late actually, in my twenties. I really like Black Sabbath, and Metallica of course!” 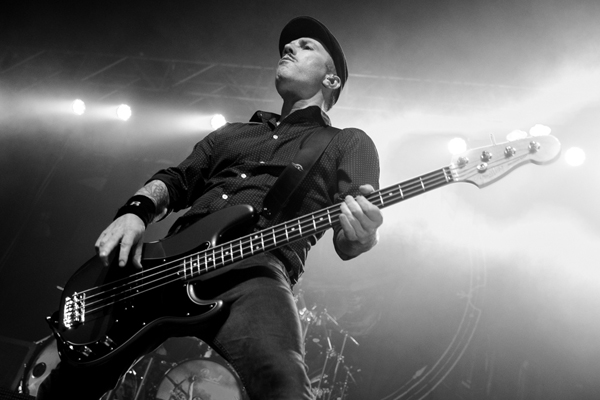 You’ve toured with Metallica, was that a dream come true?

“Yes of course! That’s a band I’ve been listening to since I was fifteen or sixteen and suddenly twenty five years later you’re saying ‘hi’ to Lars and James, and that was weird, it really was!

“Actually, playing with Lars, he was on stage with us when we did a big show in Copenhagen a few years back when we played ‘Guitar Gangsters’ and ‘Enter Sandman’.

“He was on drums and that was amazing.

“I don’t know how I played as I was so excited about it! [laughs].”

This is something which might happen more often now as Volbeat are still growing, still getting more popular.

“The first show I did with Volbeat was at Rock AM Ring in Germany which is 80,000 people or something.

“The last show I had played with my previous band before that was maybe 100 or 150 or something.

“So that was different. I’d never even dreamt about that.”

Which do you prefer?

“I like shows like this with a big crowd, but when you play arenas and big stages there’s a gap, a barrier between you and the audience.

“You can see maybe the first three, four, five rows of people and then it’s just a mess.

“The good thing is that you have a really big stage to walk around on but I still like smaller shows too. I still play with my punk band now in very small clubs.”

You can check out Volbeat’s recent Glasgow show right here. 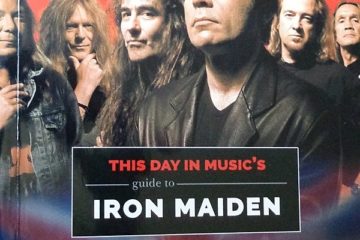