Watain and Abbath will co-headline the Chariots of Fire European Tour 2022, along with special guests Tribulation and Bölzer and will hit London on 30 September.

Swedish Grammis award-winning Tribulation has released the single Hamartia, the first to feature new guitarist Joseph Tholl. “This is a song about the many shades of the word Hamartia,” Adam Zaars says. “It’s an angry gothic tragedy sonically and introduces Joseph on guitar. This is the first of a few. We hope you like it.”

Tribulation will tour on the back of their latest album, Gloom Becomes Sound, their most expressive and inventive album to date. “We immersed ourselves in the world of myth and magic”, says guitarist and founding member Adam Zaars.

“With a specific focus on elemental magic, and the elements, in general, from both the Western and Indian esoteric traditions, not the Buddhist four elements but the five elements. Myth and magic are obviously not something new in the world of Tribulation, but it got a bit more specific on this album. We just present it from a slightly different perspective.” 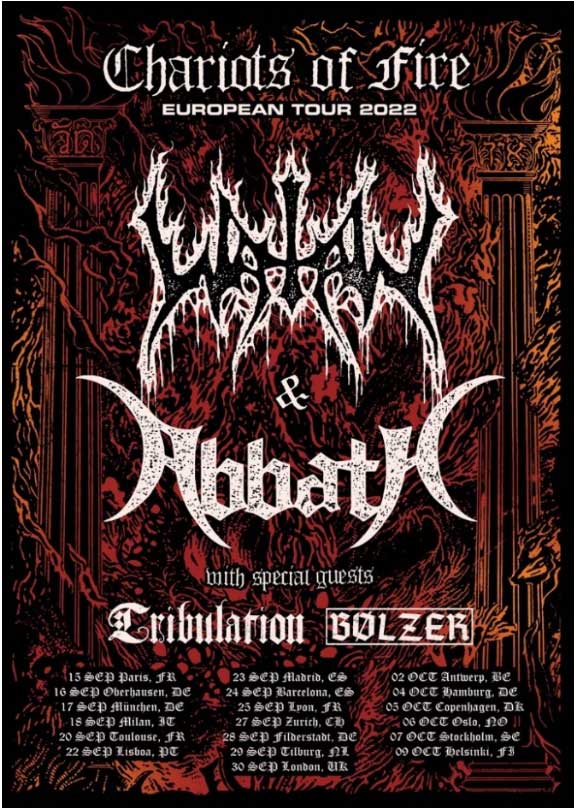 Watain and Abbath will co-headline the Chariots of Fire European Tour 2022, along with special guests Tribulation and Bölzer.

Watain and Abbath will co-headline the Chariots of Fire European Tour 2022, along with special guests Tribulation and Bölzer.