It has been six years since the steampunk airship has graced the cover of a new Transatlantic album. February 2021 sees it return once more on the cover of ‘The Absolute Universe’, which is like no album the band have released before.

Transatlantic – The Absolute Universe (Inside Out Music)

Transatlantic are Mike Portnoy (drums), Roine Stolt (guitar), Pete Trewavas (bass) and Neil Morse (keyboards) and all of them provide vocals. The first thing you will notice is that ‘The Absolute Universe’ is available in three different versions – the single disc ‘Breath Of Life’, the double disc ‘Forevermore’ and the all-singing, all dancing ‘The Ultimate Edition’. 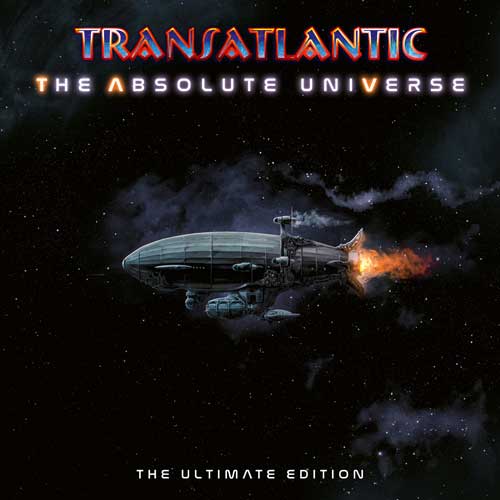 Some explanation about the different versions are necessary.

After the band met up for writing sessions in Sweden during the autumn of 2019, they left with what was effectively a 90 plus minute two CD album. Once the band started tracking in their respective home studios, (Covid had hit the planet by this time, meaning that they could not record together in their usual fashion) keyboard player Neal Morse felt that the 90 plus minute two CD version might be too much to take in for the listener.

So he suggested to the band that they edit it down to a more manageable 60 minute single disc version.

After much toing and froing, Mike Portnoy suggested that they release BOTH versions!! Cue hurried conversations with their label, Inside Out and the green light was given. The result is two truly unique albums (three if you count ‘The Ultimate Edition’, which clocks in at around the 140 minute mark) that each have different things to say.

At it’s heart, ‘The Absolute Universe’ is the same musical story arc on whatever edition you choose to listen to, with one major difference.

Think of ‘The Absolute Universe’ as a novel that has been made into a movie and you get the picture.

Musically, Transatlantic have never sounded better. If you are a fan of their third album, the single track, 77 minute ‘The Whirlwind’, then you will adore ‘The Absolute Universe’. It really is ‘The Whirlwind’s’ spiritual brother.

Given the pedigree of the participants, it is no surprise to find that virtuosity is prevalent throughout ‘The Absolute Universe’.

Vocally all four members share the job, with each member singing lead vocals on at least 2 tracks each and there are more jaw dropping musical moments than you can shake a stick at.

Is ‘The Absolute Universe’ Transatlantic’s finest moment? YOU BET IT IS.

Whatever version, or versions you choose, you will be left with a huge grin on your face.

Much credit must go to Inside Out for having the faith, confidence and the guts to allow Transatlantic to release this amazing album this way.

‘The Absolute Universe’ is just magnificent!