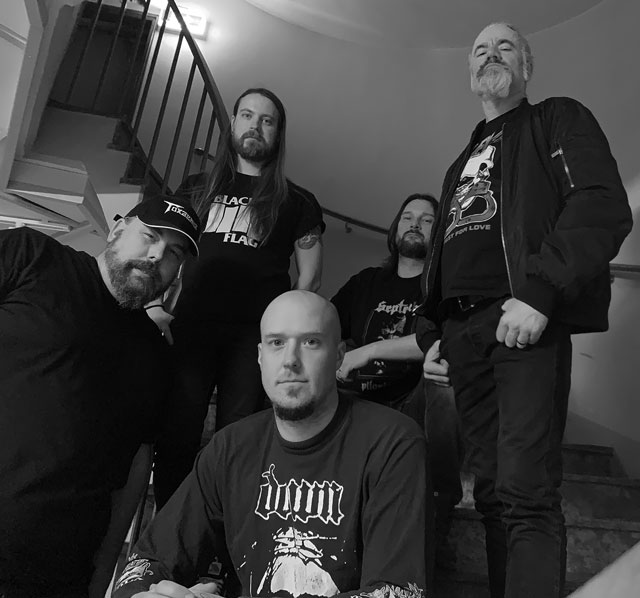 This will enthral anyone lucky enough to have copies of their 90’s EP’s demos/compilations as well as Old School Death Metal fans who are set to discover them as a result of this album.

‘Where Paths Divide’ sees a refreshed line-up where original members Stevo Bolgakov on guitar and vocals and Pontus Cervin on bass are joined by new blood Rasmus Axelsson on lead guitar, Dennis Johansson on vocals and Per “Perra” Karlsson on drums.

They are all set to unleash a new found dose of sick brutality, delivering a sound that in the past has inspired a whole army of Swedish Death Metal bands to follow in their footsteps.

‘Where Paths Divide’ is an eleven track, thirty-eight-minute offering that is an end to end aural assault. If you are looking for a Death Metal album to add a bit of excitement to your day look no further, this album is hugely exciting and insanely good. 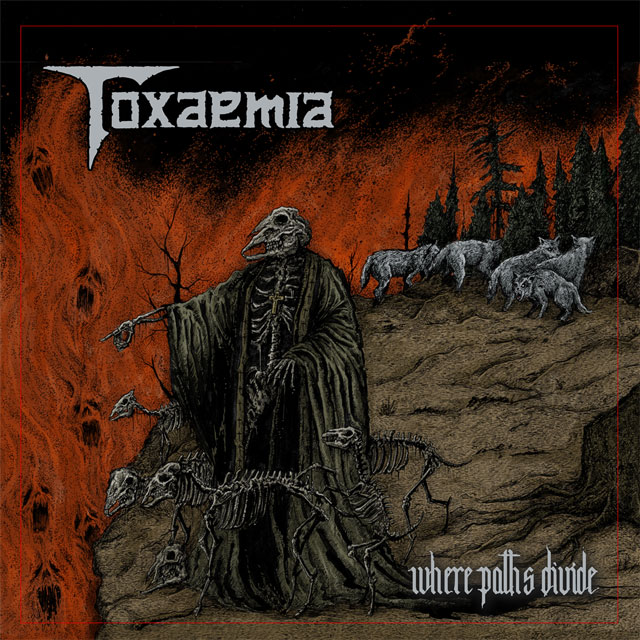 After the haunting scene setting spoken intro of ‘Where Paths Divide’, the first track ‘Delusions’ rips everything apart as it opens with an intense wall of sound, bolstered by huge wave of thrashy squeals and brutal vocal growls. You also get a melodic burst to tie everything together and give it that catchy edge.

Next ‘Pestilence’, the single released in August aiming to, and succeeding in getting everyone fired up for this release, is a rampant d-beat based, beast of a track that suddenly stops in its tracks, dropping pace briefly to an almost Doom like feel, before flipping around and turning into a thrashy shred fest, veering off into something more blackened.

With bursts of drum work popping up above everything, and if you can not quite believe what you heard, you get another drop, ripping back up to more thrashy leads.

Things are still unrelenting by the time you get to ‘Buried To Rot’, with it’s insane riffs and drum flourishes that battle it out as the track opens. Amongst the manic pace and thrashy leads, there is a catchy melodic element in there too, but it sits alongside one hell of a lot of punch.

‘Betrayal’ has a sinister opener and more thrashy squeals but a slower pace. However it is still a brutally crushing face searer of a track. I love the intense dark riffs melded with a groove, and the slower pace also allows for an eclectic range of direction shifting which surprises you with every turn.

The neck snapping pace resumes as ‘Toxaemia’ opens, paring back slightly as the track pans out allowing for punch and crush to manifest.

I love the vocal layering. It is like a dialogue, paring back slightly at the mid-point for a melodic element, before resuming with an onslaught that is both catchy and brutal.

‘Black Death’ begins with a sinister slow crush, building with menace, but knowing where to pare back to drop in vital melody and leadwork. It loses no intensity as it does so.

‘Psychotic Pandemic’ takes on a slower stomping crush, garnished with swathes of drum flourishes, addictively catchy riff patterns and thrashy squeals, which make the perfect back drop for the impactful growling vocals.

Penultimate offering ‘Leprosy’ has a wonderful contortion to the opening riffs, elevating into intense dark riffing with a punch. It is another track which twists and contorts with magnificent eclectic brutality, elevated by thrashy bursts.

And finally, ‘Hate Within’, which is hauntingly dark and sinister to open, expanding with malevolence and developing into a heavy, slower paced crush with malice aforethought, particularly in the dual vocal combat. A track which is a delight to the ears, especially when completed with squealing thrashy leadwork and closing on a sinister tolling bell.

Of the track ‘Hate Within’, guitarist Stevo Bolgakov told us: “This song has a long history. It was written back in 1990 and recorded the first time together with the four songs from the 7” EP.

“Then it went under the name ‘The Acquisition’ and had a different lyric and also the song was much longer.

“When we recorded it the second time in 1991, the song had new lyrics and been cut down and with the new title ‘Hate Within’.

“The reason for us to record it a third time is because we wanted to give it the finishing touches that we felt were lacking due to the fact that we are a more complete band today.

“We have the lead guitarist we did not have in 1991, a vocalist with a greater range and a drummer with over 30 years experience, more than the rest of the band combined.

“They [the lyrics] are written with disgust towards the false personas and the lying in the media. What is said is basically that it is OK to f**king hate, don’t be afraid to step on a few toes to get where you want and be able to stand alone against the masses.”

‘Where Paths Divide’ will be released in the following formats; digital, CD, and LP (crystal clear vinyl, limited to 500) by Emanzipation Productions.

It should definitely appeal to fans of Incantation, Entombed and Dismember or anyone who loves an utter beast of an Old School Death Metal album.