In what is now almost becoming an annual event, Steel Panther returned to Dublin on their Heavy Metal Rules Tour and just as they did back in 2018, they’ve brought along Wayward Sons to moisten up the crowd.

The last time Wayward Sons were on a Dublin stage, Toby Jepson was feeling a bit Tom Dick and a bumpy ferry ride across the Irish sea probably didn’t help his cause. But being the trooper he is, the Scarborough legend gave his ailment the middle finger and battled through a lively forty-five minute set.

Thankfully tonight the all action frontman is a picture of health as he and his posse once again dismounted and showed their muscle. Now an album heavier the band launched into action with a shiny new ‘Any Other Way’ and straight away marked everyone’s card. 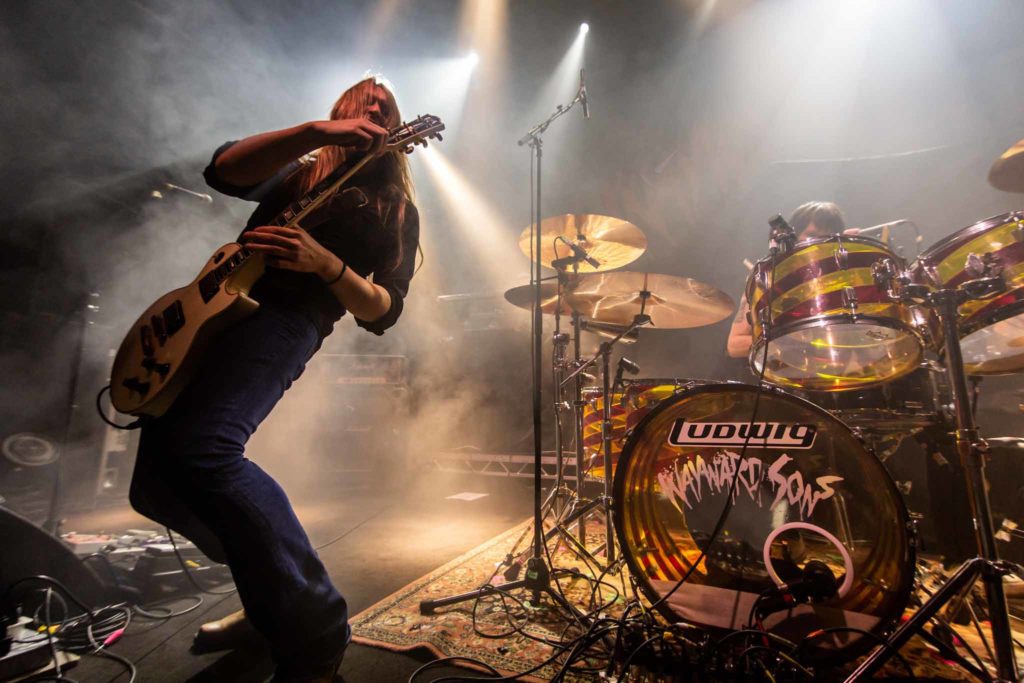 When Toby Jepson steps up to a microphone he immediately has your undivided attention and his iron fisted delivery of ‘Don’t Wanna Go’ landed a killer blow to wake up a few android glaring addicts. Although promoting their second album ‘The Truth Ain’t What It Used To Be’, it’s safe to say the vast majority wouldn’t be familiar with first one. Either way Ghost and the Queen treated ‘Little White Lies’ made their presence felt. 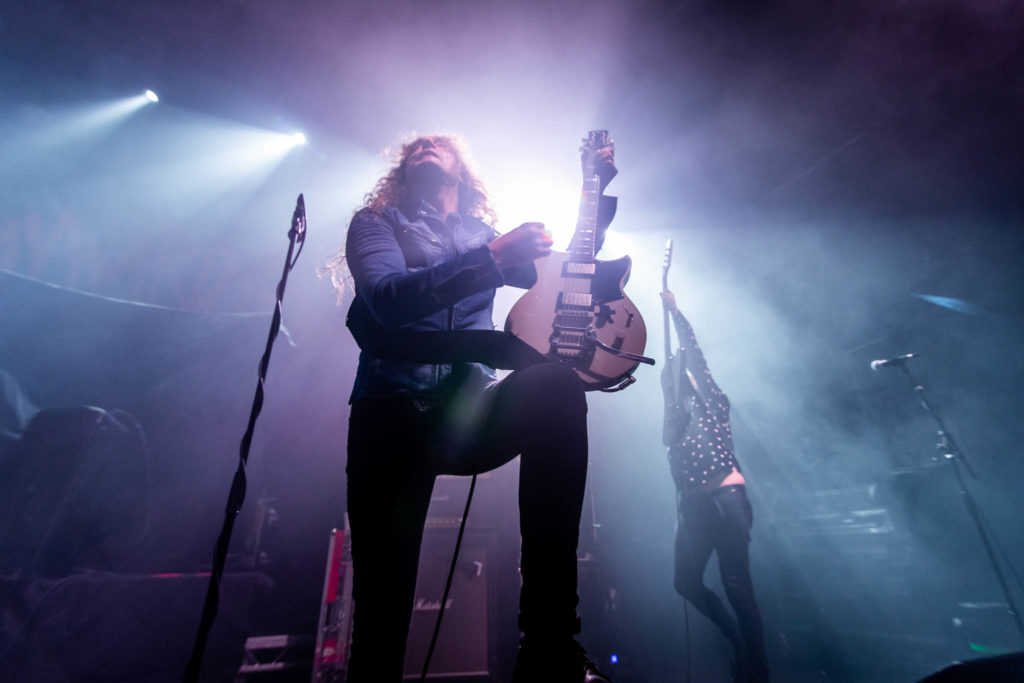 Wayward Sons have a good thing going on here. The effervescent Sam Wood caressed his Gibson like the modern day guitar hero he is sure to become, the yin and yang rhythm section of spring loaded bassist Nic Wastell and the dashing Phil Martini knitted the tunes together majestically.

And let’s not forget Dave Kemp who almost anonymously blended in with the black backdrop but provided some very tidy ivory tickling. As for the commander in chief Mr Jepson, he is a born leader and he brought out his inner Springsteen on ‘Joke’s On You’ and ‘Until The End’.

Another brilliant Irish appearance by Wayward Sons, but I suspect there is more to come. 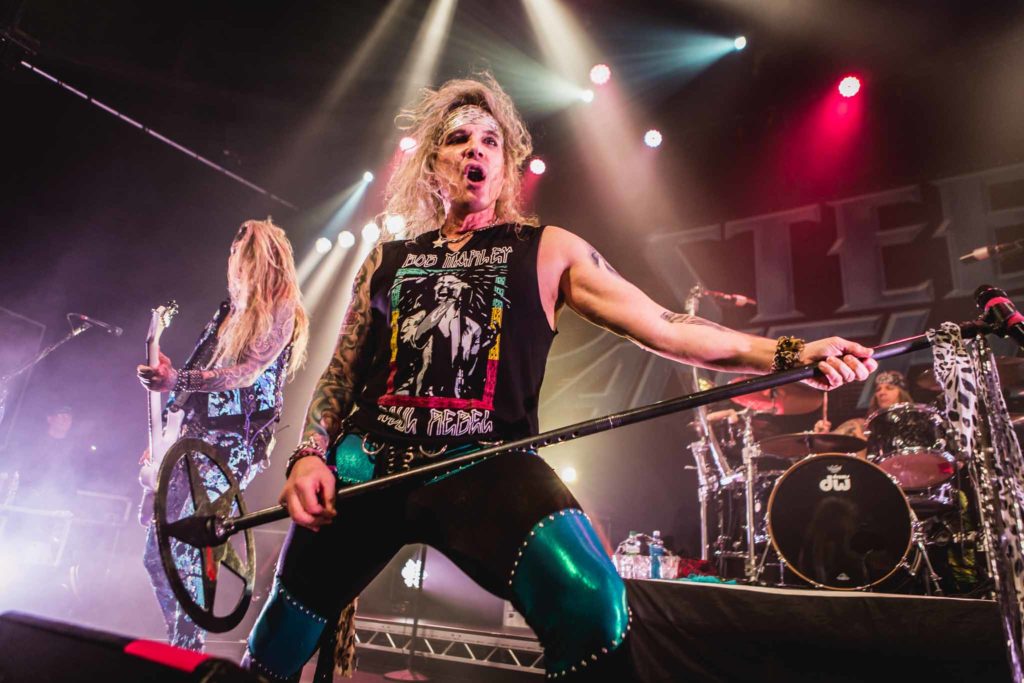 If Steel Panther ever decide to document their career in movie form it would most probably make Mötley Crue’s biopic ‘The Dirt’ look like ‘Watership Down’. The filter free fourpiece are of course having a massive wind up, but their shameless antics still continue to blush the cheeks of the most seasoned of smut lovers.

The new album maybe titled ‘Heavy Metal Rules’, but as we all know the only rule that really applies is that if you can’t take a joke, grab your coat and off ya fuck. Yes they’re as predictable as a flushing toilet, but as they say timing is everything and Panther’s comedic clock still ticks at just the right moments. 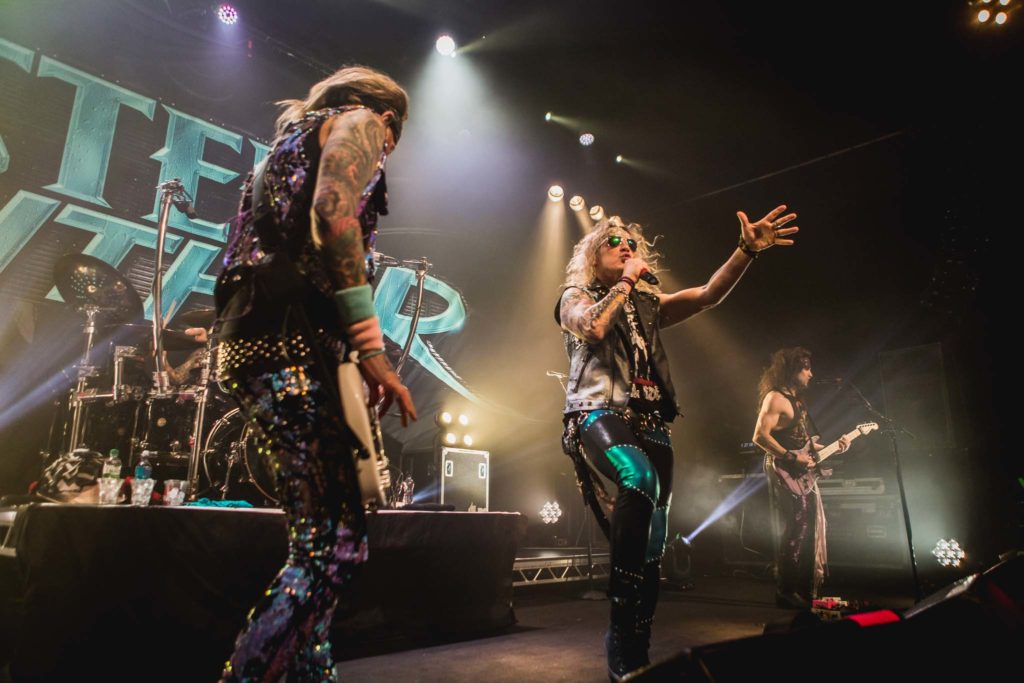 After Van Halen’s ‘Everybody Wants Some’ blared out over the darkened room, the last word in filth made a low key walk on and ‘Eyes Of A Panther’ got the foreplay underway. The Dubs were oiled up and ready for a Californian roasting.

As is always the case the between song scripted banter goes on a bit, but it’s always worth it when, for example, they round it off with drummer Stix Zadinia hiding one of his arms down his shirt showing his Rick Allen impersonation, topped off with a little blast of Def Leppard’s ‘Photograph’. 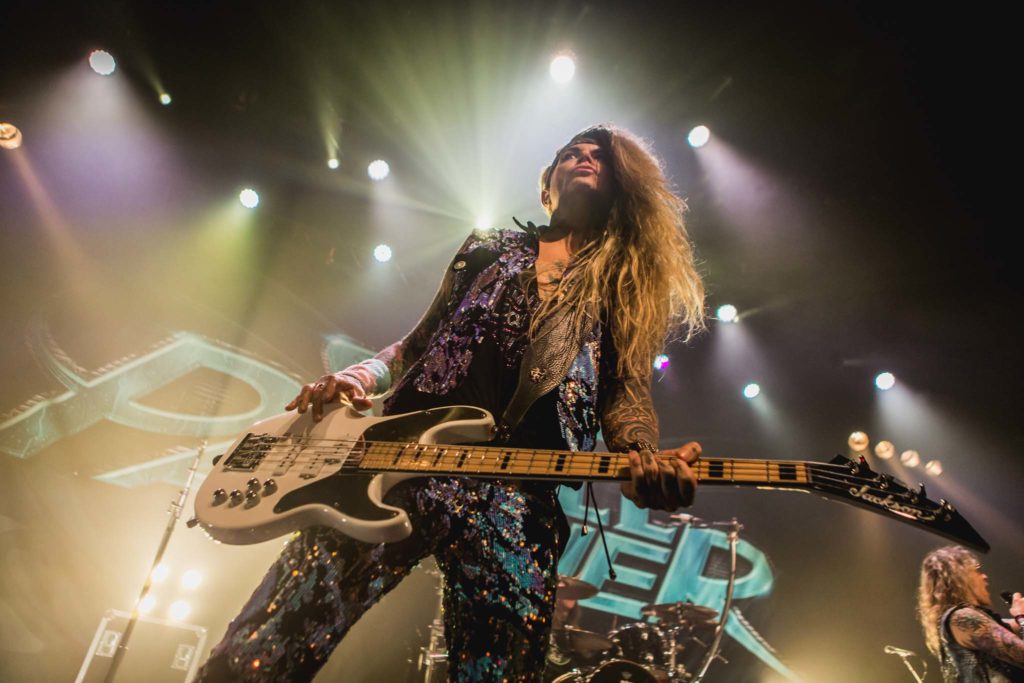 ‘Socially conscious’ new songs ‘All I Wanna Do Is(Fuck Myself)’ and ‘Fuck Everybody’ raised the roof and queued some boisterous crowd participation, while the emergence of an inflatable penis added to the sweet immaturity. Lexxi Foxx’s bass solo was hilariously aided by Michael Starr keeping his precious barnet full of volume by blasting him with a leaf blower. Following a wholesome tale about sodomy, ‘Poontang Boomerang’ still continues to prove that ridiculous song titles can be deceiving. 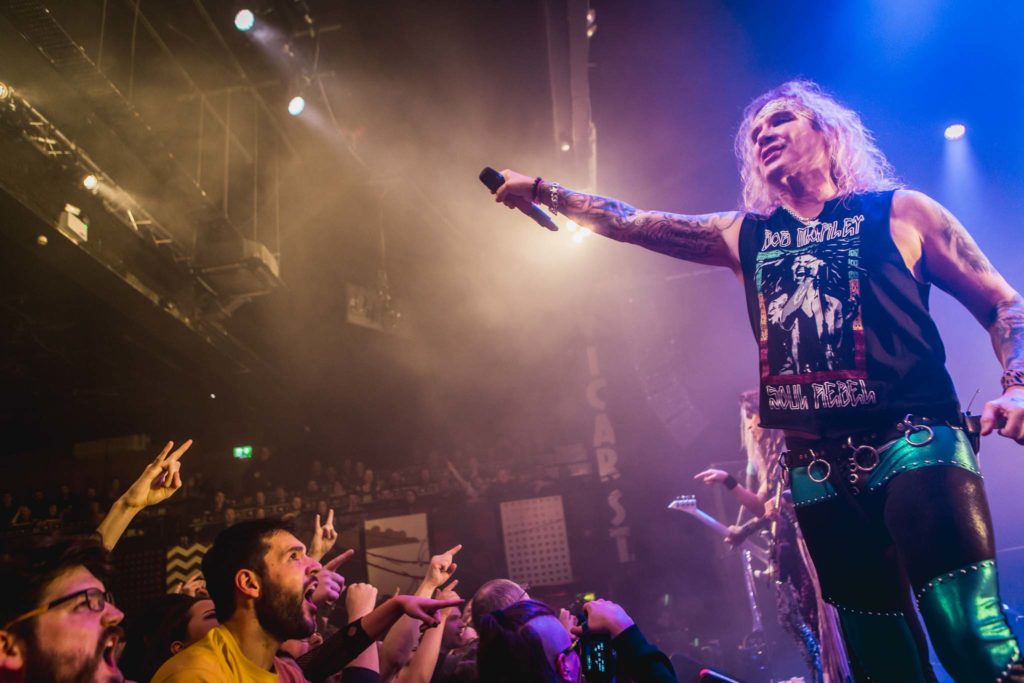 Anybody who has already attended a Steel Panther show will know that sooner or later a bevy of beauties will join the band for a bit of shape throwing. The anthemic ‘Party All Day(Fuck All Night)’ and ‘17 Girls In a Row’ saw a stage full of willing lasses, including one in particular who, as they say, ‘got them out’! 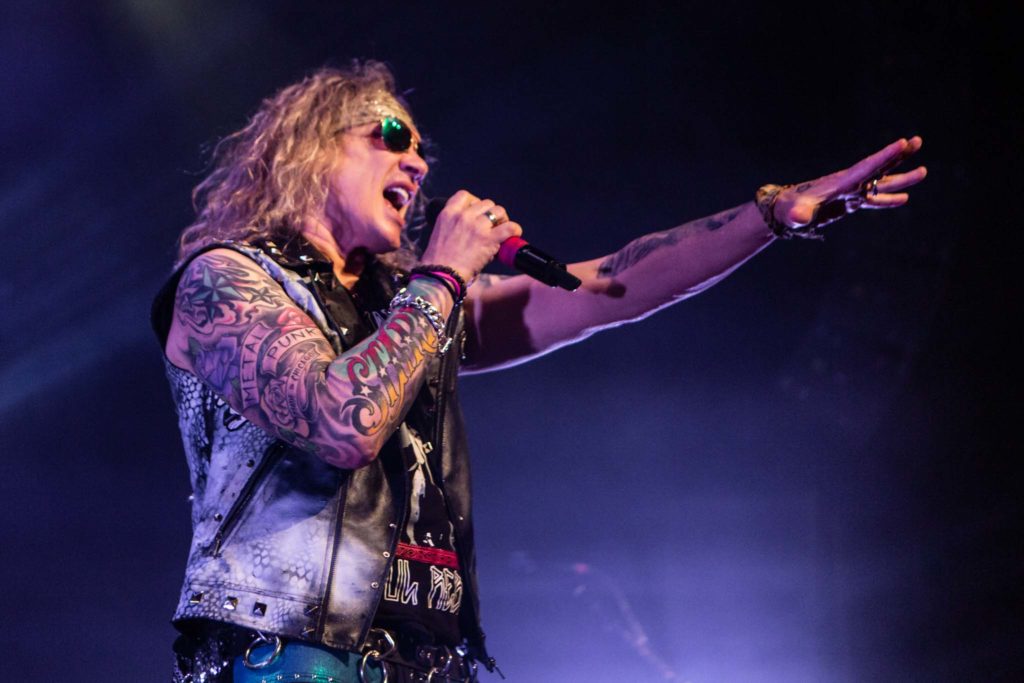 The Justin Bieber hating ‘Death To All But Metal’ closesd out the main set with its usual clatter before returning with everyone’s favourite restroom ditty ‘Gloryhole’, a song that never fails live. It’s debauched theme was the perfect way for 1200 sin soaked fans to call time on their weekend.

In a world full of hypersensitive nit-pickers, Steel Panther continue to provide a safe haven for lovers of the politically incorrect. 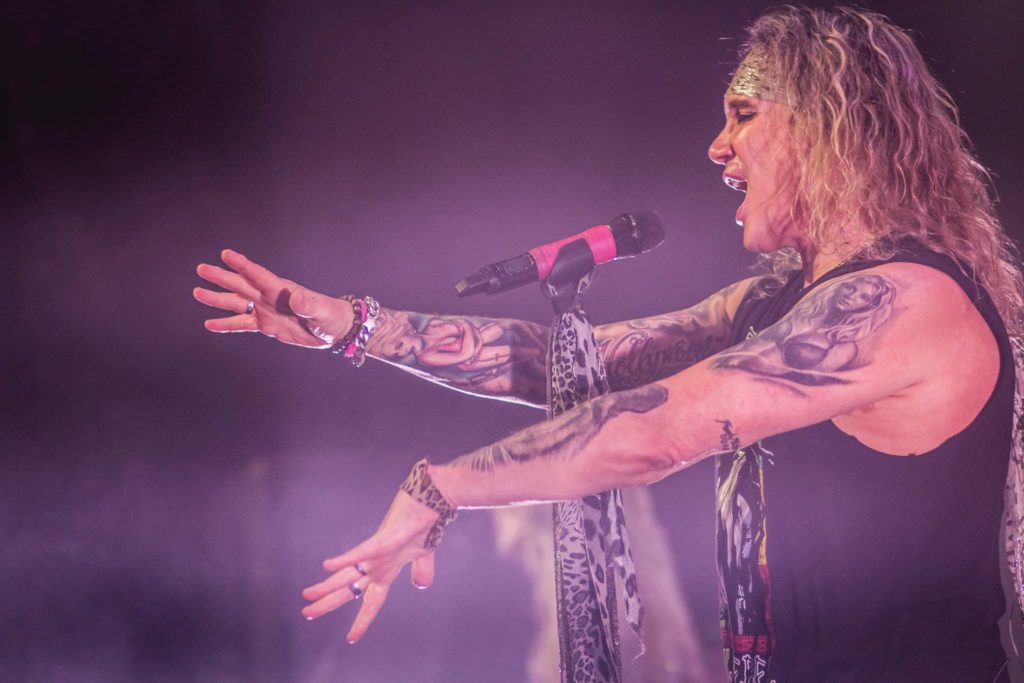 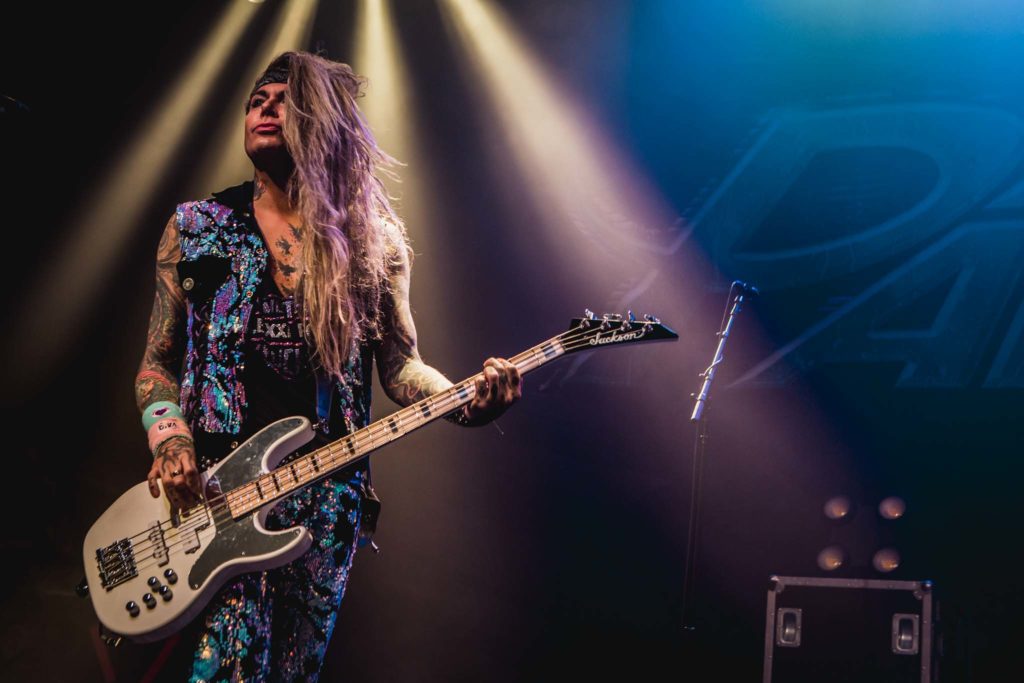 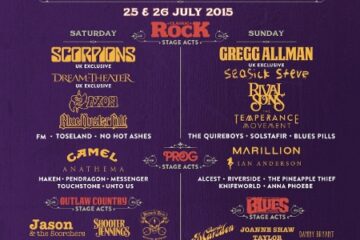