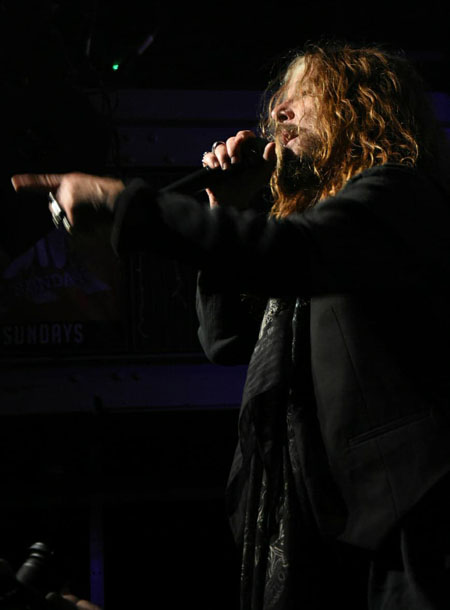 A completely packed out Glasgow Garage turned from sold out to burned out and burned down within three magical hours tonight as a super-hyped audience witnessed an explosive first night of the ‘Burn It Down’ world tour.

Glasgow always parties hard but the Sunday best this week was extra special as two of the hottest live bands around absolutely brought the house down. 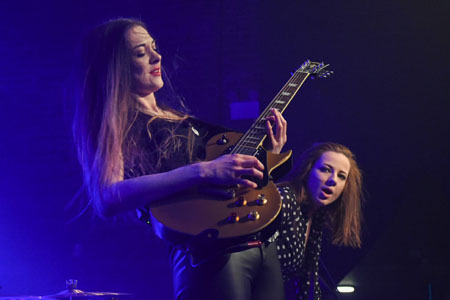 Both The Dead Daisies and The Amorettes released their fourth albums just two days ago and both are about to make a serious impact in next week’s album chart, but that isn’t the only thing the two have in common as both seem reinvigorated and have even taken their craft to a brand new level.

Starting with Slade’s ‘We’ll Bring The House Down’ as your intro music is a statement and one that The Amorettes back up with sheer force that’s heavily underlined by the power of first song proper, the title track of new album ‘Born To Break’. 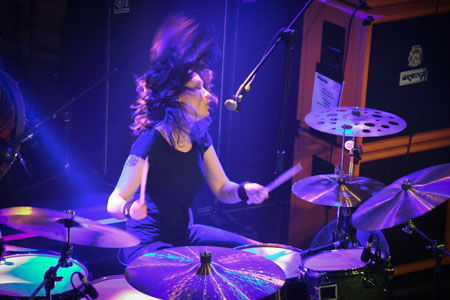 The first single from ‘Born To Break, ‘Everything I Learned I Learned From Rock And Roll’, was the only other track from the new album given a run out tonight in a short but pulsating set that also served as a reminder that despite having just hit a career high with ‘Born To Break’, previous album ‘White Hot Heat’ will also remain valid and timeless.

The remainder of the set was made up from ‘White Hot Heat’ with ‘Let The Neighbours Call The Cops’ and ‘Russian Roulette’ both serious contenders for song of the night but it’s not just the quality of the material on offer that makes The Amorettes an exceptional live act. There’s a new level of confidence on display here in both the playing and in the performance and it comes from paying their dues on the road and is a reflection of the quality of the new album.

Gill Montgomery totally commands her audience all the way through the set and as she dedicates ‘Come And Get It’ to all those who support live music, it’s easy to think that those numbers would be increased significantly if every band was as good as this. 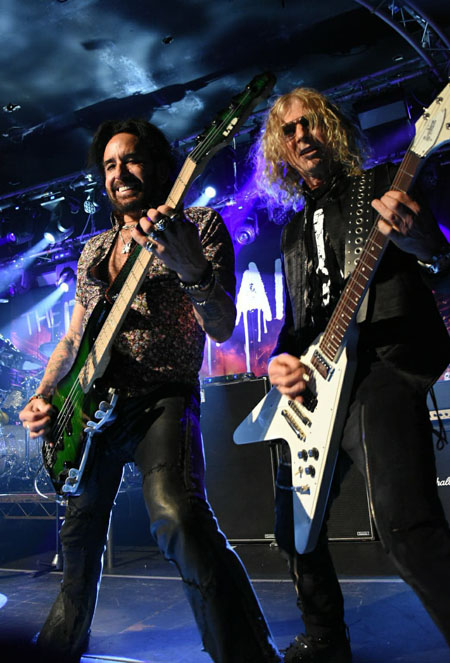 You could almost taste the mad crackle of anticipation in the air as the lights dropped and the realisation that the wait was finally over kicked in and The Dead Daisies hit the stage with all guns blazing and let rip with their full armoury, ‘Rise Up’ the perfect opener as that is precisely what this hungry audience did.

With the bit very firmly beneath his teeth and the audience conquered before the second verse, John Corabi is comfortable enough to pose for the assembled snappers at the front of the stage during the opener’s instrumental mid-section while Doug Aldrich resurrects his red Gibson double-necker for the new album’s opening track. 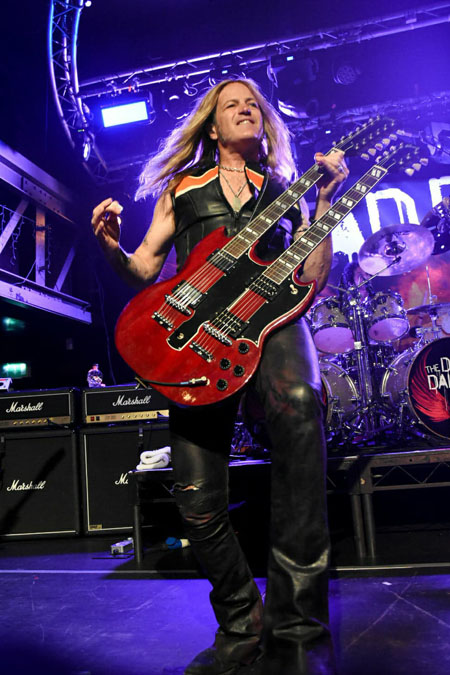 ‘Make Some Noise’ was a sure signal for the gathered masses to start getting crazy all night and everything about the Daisies just oozed total quality, from David Lowy’s white flying V, which he swaps at the end of ‘Resurrected’ for a different white flying V, Marco Mendoza’s movement and gestures to the crowd, especially the prettiest girls who he relishes in showering with his signature plectrums, and Corabi’s easy style and manner.

Then there’s Doug of course, already on his fourth different axe before the new album’s thunderous title track kicks in, and the former Whitesnake and Dio guitarist is basking in every second of this, an absolutely triumphant first night of the tour. 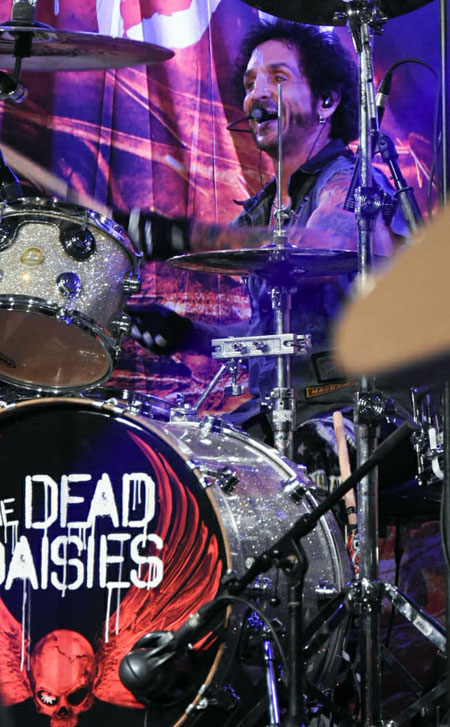 New drummer Deen Castronovo not only gets a very special introduction from Corabi but a short solo spot and a huge ovation too. It’s clear that his appointment has added new life to the band and the cheeky addition of a passage of Led Zep’s ‘Whole Lotta Love’ into the set is a surprise and a sure sign that the Daisies are not afraid to throw away the script and mix it up a bit.

Doug’s voicebox doesn’t get a day trip on the new album but it does here during ‘With You And I’ and Corabi expertly draws the crowd in to the new album’s ballad, ‘Set Me Free’. Parity is well and truly restored with a blistering ‘Long Way To Go’ which almost lifts the roof off before an entertaining introduction of all the individual members which included impromptu snippets of ‘Highway To Hell’, ‘The Boys Are Back in Town’, ‘Smoke On The Water’, ‘Rock And Roll All Night’ and ‘Heaven And Hell’. The Dead Daisies are completely in tune with exactly what the modern rock audience want and they deliver it in a style very few can match. 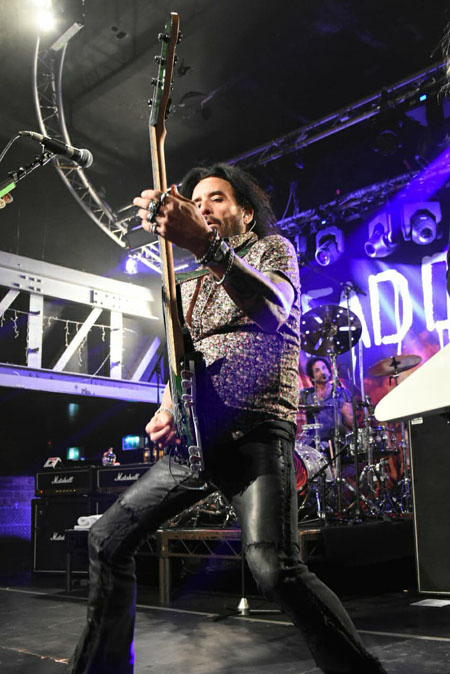 They couldn’t possibly play Glasgow without giving ‘Midnight Moses’ a solid airing and this particular version is absolutely sensational but unfortunately it’s the final song before the band pretend they have finished their set, but no Dead Daisies gig is complete without ‘Fortunate Son’, one of only two covers tonight, both easily better than the originals.

It was Deen Castronovo’s first Dead Daisies gig tonight and they took to the stage and laid to waste to it, all without a soundcheck and sold the place out, despite Massive Wagons, Toto and Martin Barre all playing Glasgow at the same time. 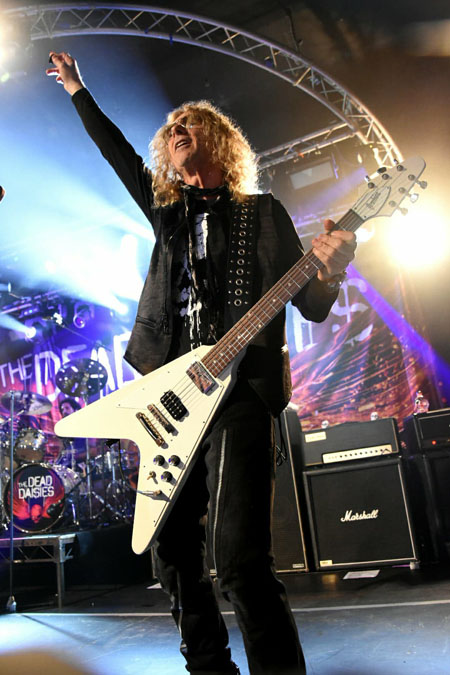 John was generous with this gratitude for the support the new album has so far received, although he did get the day wrong, thinking it was Saturday not Sunday. Maybe it’s too long since he last saw the sun and maybe it will be an even longer time until this stellar act eventually come back to earth. In the meantime, catch them if you can on what is sure to go down as one of the tours of the year because they are seriously smoking and this is only night one.

The Dead Daisies setlist:
Rise Up
Resurrected
Make Some Noise
What Goes Around
Last Time I Saw The Sun
All The Same
Burn It Down
Set Me Free
With You And I
Long Way To Go
Mainline
Mexico
Midnight Moses
Fortunate Son