Death Angel hit the stage first on Friday night and O2 Forum was already at full capacity. With a set list balanced across the band’s various albums including the most recently released “Humanicide”, songs were carefully chosen to slowly raise up the room’s atmosphere.

Death Angel is a truly great band to see live and whether you are a genre fan or not the band’s chemistry and musicianship make for a great live experience. They have a good opening slot, limited stage space (because of Testament’s stage gear) they impressively take over and make the most of it and excellent sound.

They manage to turn the pit early into a crowd surfing playground. The fans love them and there is a big following in the UK. Let’s hope the band returns as headliners because they can comfortably hold their own show. 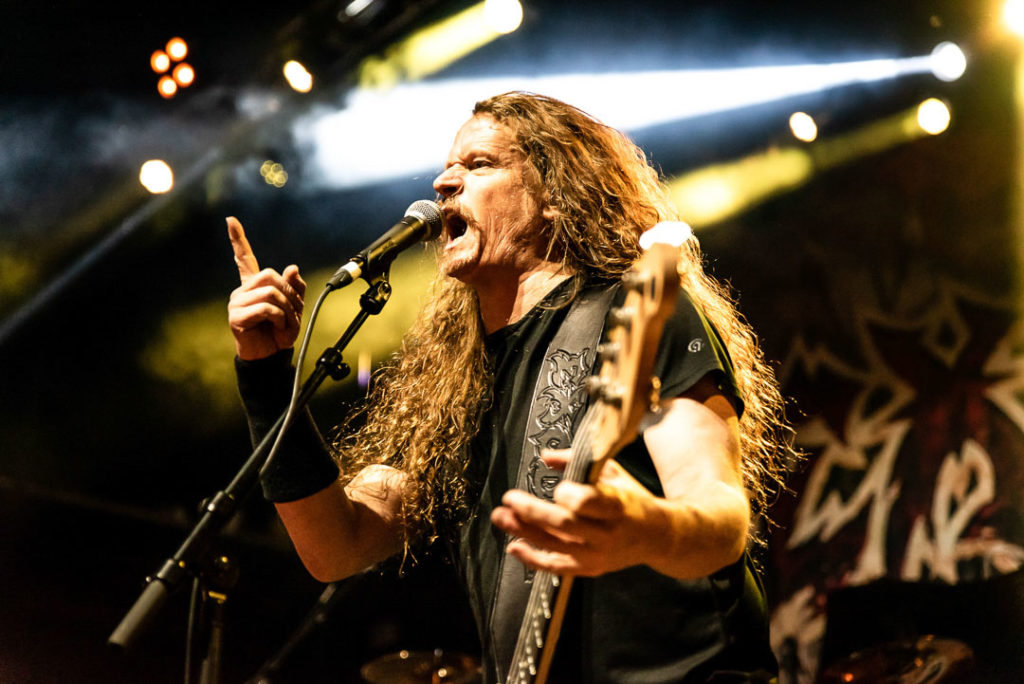 Exodus treated the crowd to a number of classics. It only added to the already elevated atmosphere that Death Angel built up. By the third song ‘And Then There Were None’ crowd surfing was relentless as it was time for Gary Holt’s “Kill the Kardashians” (now trademark of a t shirt) to make its appearance. 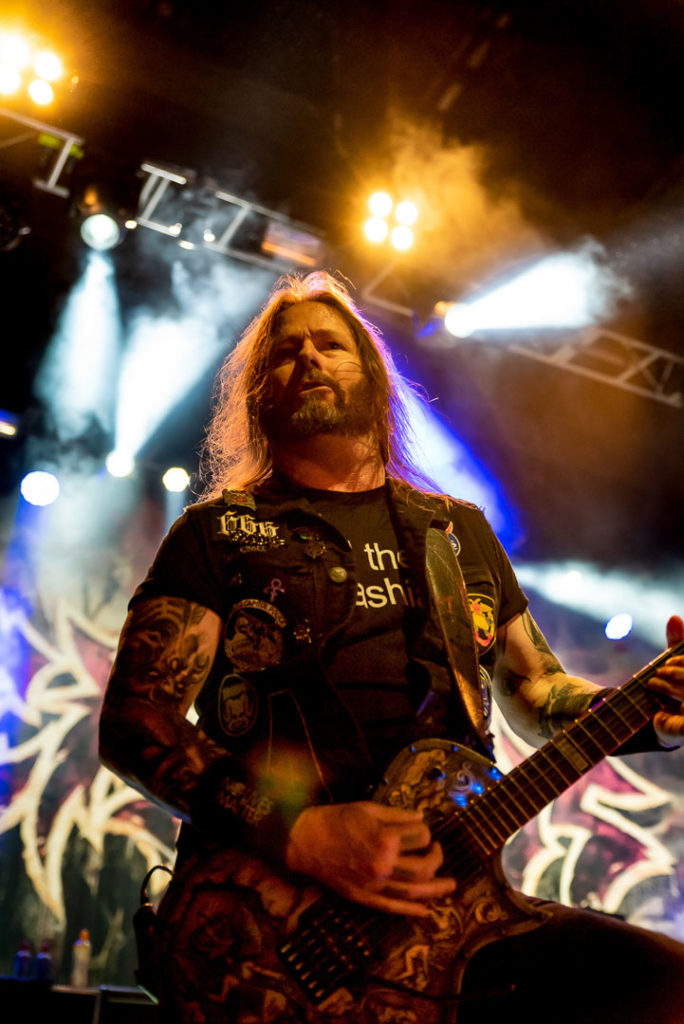 In the music world, a lot of times ‘retirement’ only means a brand new phase for an artist and it’s to every fan’s relief to see Gary Holt – after closing legendary Slayer’s Global tour and life span – back on stage in such great form, with non exhaustive energy and of course with his trademark stage smirk.

“If it wasn’t for the New Wave of British Heavy Metal there wouldn’t be any thrash metal…Always good to be back” shouts Steve “Zetro” Souza. 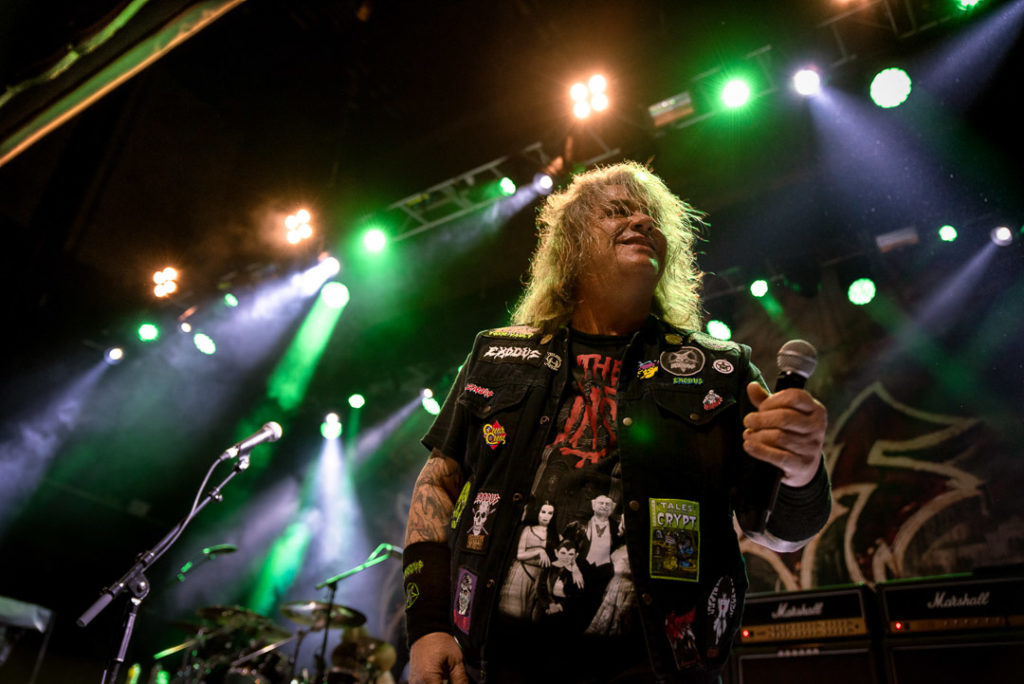 When a band has such a good time on stage it only translates to the energy they give back. Exodus is a great energy vibes band. They get on stage and their charisma shines through; their performances, the electrifying solos by Altus and Holt, the interaction with the crowd; but most and foremost the fact that they are so present in the moment and connect with their fans throughout. The result is just powerful. 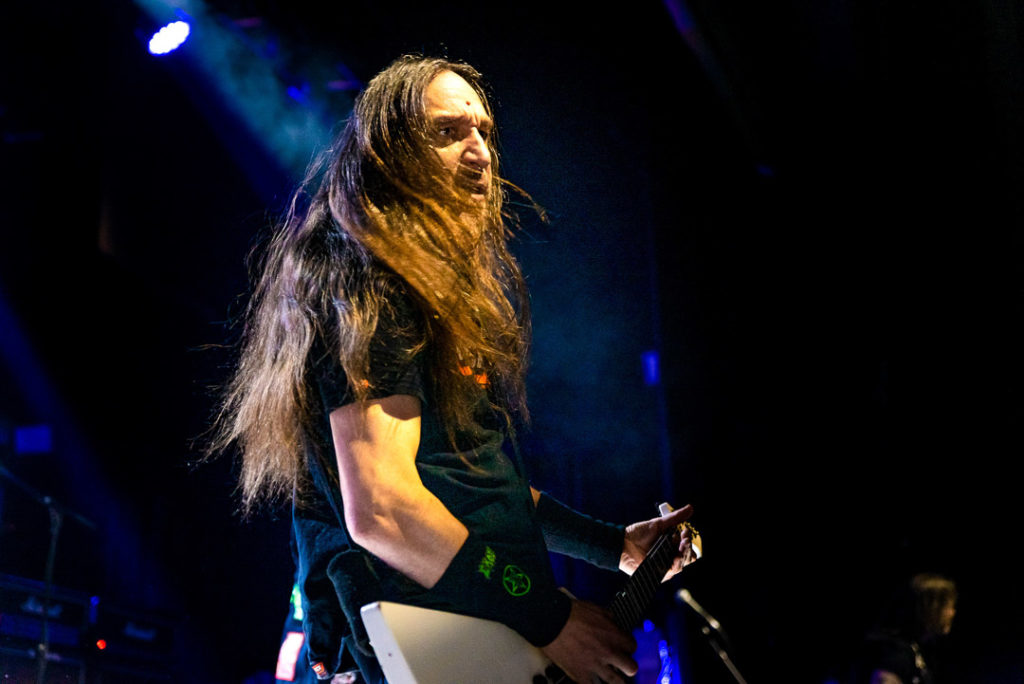 ‘Deathamphetamine’ with Holt’s master solo was a night’s highlight as there were the ‘The Toxic Waltz’ – which seemed to be the piece that really made the peak of this set – and old time fan favourite Strike of the Beast. 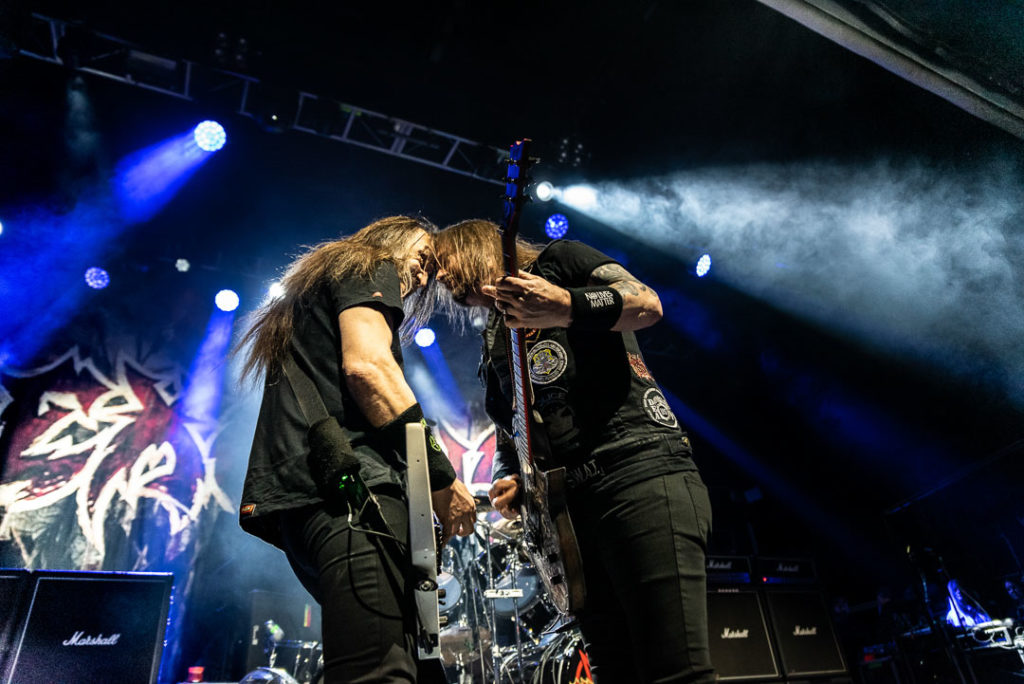 The current line up is solid strong and only further momentum is coming in as the band is due to launch a new album later this year.

Exodus Setlist
Body Harvest
Blood In, Blood Out
And Then There Were None
Fabulous Disaster
Deathamphetamine
Blacklist
Bonded by Blood
Piranha
The Toxic Waltz
Strike of the Beast 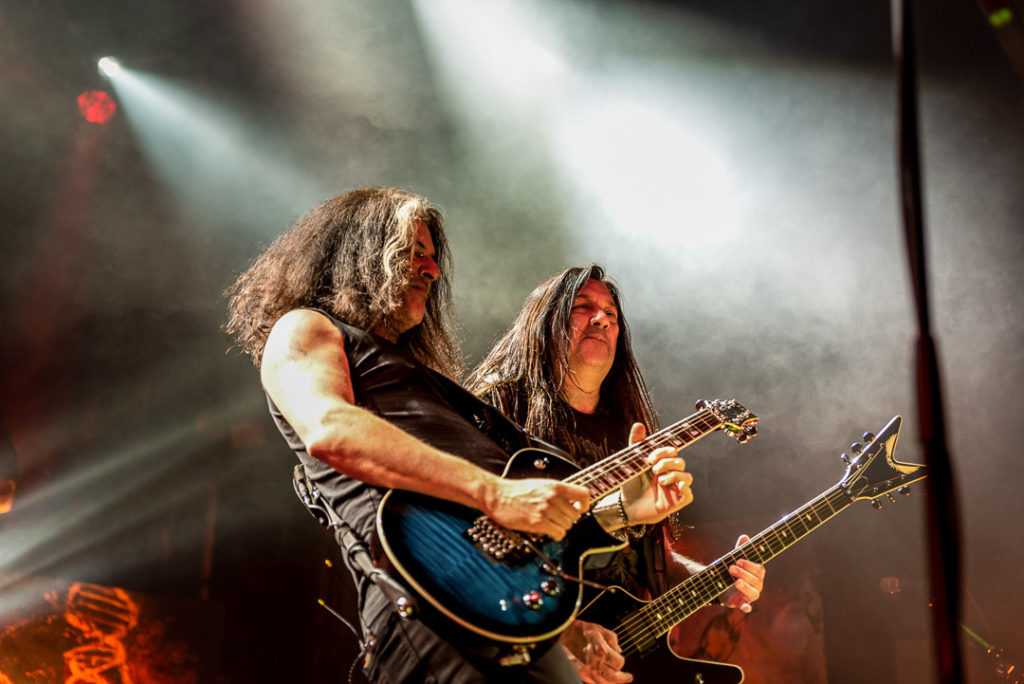 Testament are fresh out of the studio with the imminent release of “Titans of Creation” (due on 3rd April). If I could sum up the band’s performance in one sentence would be that of lead man Chuck Billy on the night “Friends over 30 years, grew up in a good time for thrash metal…30 years later still spreading the word”.

And that’s exactly what Testament still do. The fans seem not to be able to get enough of the band. 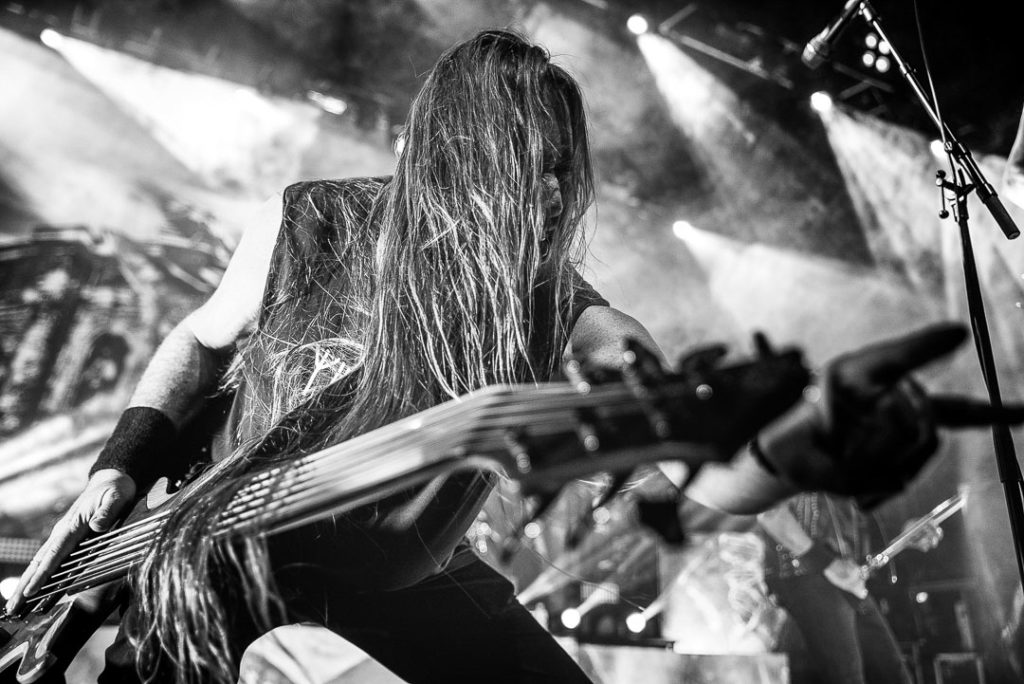 The technical execution was impressive and the band has a very powerful combination in guitars with Eric Peterson and Alex Skolnick; different kind of guitar players, bringing in a very interesting mix.

Highlights included the live debut of ‘Children of the Next Level’ from the new album, much to the crowd’s delight. ‘Throne of Thorns’ with its grandiose opening stood out and was the perfect platform for a guitar skills showcase with both Peterson and Skolnick taking the spotlight.

‘Brotherhood of the Snake’, ‘Practice What You Preach’ and ‘Over the Wall’ were amongst fan favourites evoking circle pits and more crowd surfing before the band finished the evening with ‘Disciples of the Watch’. 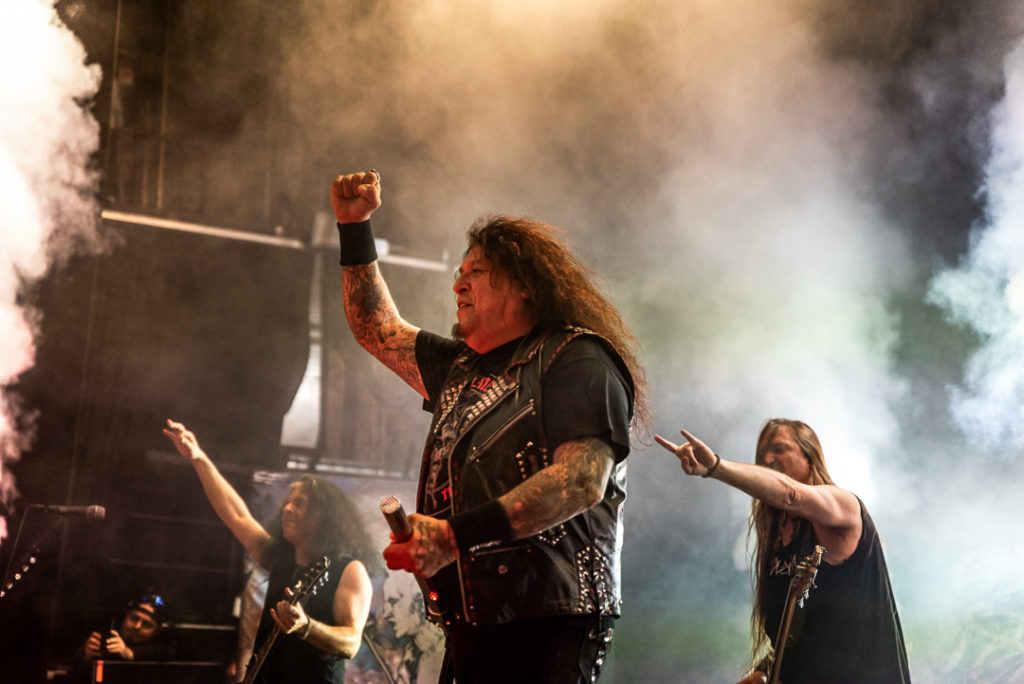 It was a night of celebration for thrash metal. All three bands delivered powerful performances; each of them with its unique musical and stage style and the audience was great which really added to the night’s great experience.

* shows in Milan and Hannover were cancelled over coronavirus concerns 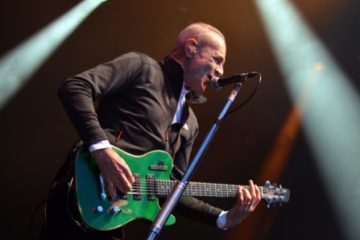