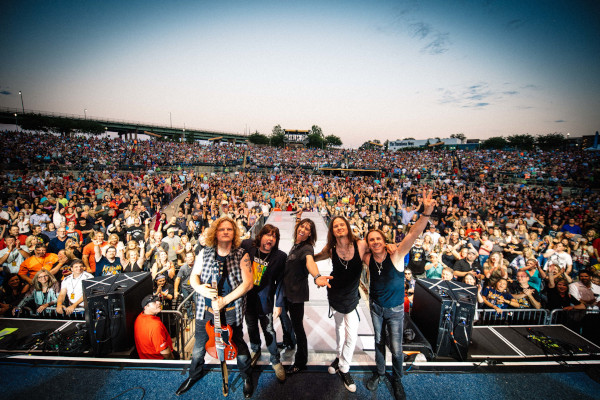 Having recently released their new album, ‘Shock’, Tesla have just completed their latest set of European dates, including a prestigious appearance on the Main Stage at Download festival. MetalTalk sat down with drummer Troy Luccketta to just after that performance to chat about the European tour, their new album and what keeps Tesla going on the road.

MetalTalk: So you just got off the mainstage at Download – how was it for you?

Troy: It was fantastic! Not many shortcomings and the sound from our monitors was good and I think everyone got through it pretty well.

MetalTalk: Are you enjoying this British summer time weather?

Troy: Absolutely [laughs]. Well we had some nice weather actually so it wasn’t too bad for us.

MetalTalk: This week you also have a rare headline show in London. Tesla doesn’t make it over to the UK that often – why is that?

Troy: Unfortunately it’s just logistics. These days it’s so expensive touring and traveling. We do try to get out here to the UK but we really don’t get out enough. We’re glad to be back.

MetalTalk: You’ve been playing some songs from your new album, ‘Shock’, on the current tour – how has it been going over with the fans?

Troy: So far OK! In our own headlining show we have three new songs in the set and so far the reception has been good.

MetalTalk: Phil Collin from Def Leppard produced the new album – how was it working with him?

Troy: Really easy actually, I mean when you think about how he is used to working with Mutt Lang… as a drummer I could just let go. It was painless man. We went in for the drums and three and a half days later we were done – we knocked it right out. It was very organic for me because I never had to sit down and practice the songs or play any of them until I sat and recorded them. Phil told me “let’s just keep it simple so I can air drum to the record,” and I told him I got it. We just blasted through it.

MetalTalk: Going back to your classic albums, it’s been thirty-three years since ‘Mechanical Resonance’ came out – how does that feel to look back on?

MetalTalk: Well Tesla seem to have rode out so many trends in music like grunge to nu-Metal – do you think its a testament to those songs?

Troy: Yeah, that’s what is so cool about today. We work it just like we did back in the day and people are still singing the songs with us and enjoying it and that’s so cool. When I see kids who weren’t even born back then singing along – that’s a trip. That really blows my mind! [laughs]. But I think that’s what’s so cool about this generation and it is generational. We pass it down and the kids discover all this music that’s new for them and that’s so exciting.

MetalTalk: Do you still have a particular favourite to play?

Troy: I don’t have a particular favourite… I mean there’s so many great songs we’ve written over the years and it’s such a big catalogue to draw from. It’s just about how you’re feeling in that moment. I’m pretty pleased about what we’ve been able to achieve.

MetalTalk: Tesla has been a regular participant on the Monsters Of Rock Cruises – how are those to play?

Troy: Yeah we’ve done them pretty much every year for the last seven years. The set-up is just one of those things and it is what it is. It’s cool because everybody hangs out. We don’t just hibernate in our bunks, we get out there and mingle and that’s the best way to do that thing and enjoy it. It’s a paid vacation really.

MetalTalk: What have Tesla got coming up?

Troy: Well we finish up our tour here in a couple of weeks, then we go back out with Def Leppard in July. We’re so happy to be back on the road with those guys – they’ve always been great to us. Then we’re going around the States on our own until October, then we’ll pick it up again next year. We’re always trying to reinvent this thing and I think that’s why it’s genuine, and that’s why people still take to it.