Tara Lynch released her debut album Evil Enough pre-pandemic, and this ten-track classy Metal album showcases her unmistakable guitar and songwriting talents in grand style. With Covid-19 curtailing her earlier plans, Tara heads out on tour with Last In Line, with the first date in Dallas, Texas, this Thursday.

MetalTalk editor Steve Ritchie spoke to Tara on the third anniversary of her Cambridge performance supporting UFO on their final tour, wondering if she sent a good report of England back to America?

“Absolutely. I loved my time out there,” Tara says. “I thought it was fantastic that people were just so lovely. The beautiful audiences, great crowds. There are English guys in UFO, it’s their territory, but it was just magnificent to be a part of all that.”

Having seen Tara and Ufo at both the London and Cambridge shows, one thing that was common was the chat at the bar after their performances which was really supportive, complimentary and encouraging. That was also a strong lineup. “As a solo artist,” Tara says, “it’s hard to pull everybody together, the same group all the time. I have different lineups every time, but everybody’s always top. But that was really excellent, my best memory of England.”

Tara played with Last In Line in December 2021, and the excitement at getting back to gigging is obvious. “It was amazing to be able to do that,” Tara says. “It was odd because you don’t know quite what you’re walking into after something like lockdowns. All the different venues have different rules, and the states here in America have different rules for it as well. It was interesting to see how the general audience handled themselves at each of the shows.

“Certain cities were all masked, and then other cities were completely unmasked like it never happened. My favourite show on that run was the one in Flint, Michigan, at the Machine Shop. That was a fantastic crowd, and it just seemed like normal again, and not revolving around the whole Covid-19 thing.”

Tara also played the Blue Ridge Rock Festival to a 160,000 crowd in September 2021. “Playing that show was quite the experience,” Tara says. “I didn’t know what to expect at a festival so soon after the lockdown was lifted. Other than the fact that they handed all of us tests backstage, it didn’t seem to be an issue at all. It was a pretty cool festival.”

Tara was packing when we spoke, ready to hit the road with Last In Line again, with the first date tomorrow night in Dallas, Texas. The Vinnie Appice and Phil Soussan connection, both who played on Tara’s album, seemed the like reason for this. “Absolutely. They’ve both played on my record, and we’ve been friends for many years,” Tara says. “With Last In Line, it’s a very good pairing. The audience loves seeing our bands together because it’s music that falls in a similar realm, genre-wise.”

With the debut album Evil Enough already released, the importance of being about to play live again cannot be understated. “I’m still new,” Tara says. “I still have the one album. Covid-19 put me behind a couple of years, obviously, but I’m still trying to build an audience, not just play for my existing audience. So it’s important for me to go out with guys like Last In Line because their fans certainly become mine as well in most cases. It’s a beautiful symbiotic relationship. We work very well together. Personal friendships aside, it’s a good pairing, so everybody’s always very happy afterwards.”

A planned European tour with guitar legend Vinne Moore has been postponed until May 2022. “That is another good pairing,” Tara says, “because, as you know, I have quite a few instrumentals on my record. I have another new one that I’ll be playing on that tour. That is a great audience for me to build on, and I’m excited to play for Vinnie’s crowd.”

Tara’s debut album Evil Enough has been out for three years, and it is an album that is still on my playlist. Her approach to songwriting is wonderfully solid, and, for me, the instrumental tracks are great and packed full of melody. Mark Boals vocals are really good, and Tara shreds elegantly.

“I think a phenomenal record,” Tara says. “I am in love with it. My listeners on Spotify have just been growing and building. It’s just gone up and up, pretty much around the globe. I’ve built up quite the listening audience in the United States lately, which is great because it was mostly in Europe, having toured there in the beginning. So, it’s really nice that by doing these Last In Line dates, I’ve been picking up an American audience.”

Tara says the next album is very much underway, but the sense that there is unfinished business with Evil Enough is quite rightly there. “I really think that Evil Enough didn’t get the attention it deserved at the time with everything that was going on in the world,” Tara says.

“You put it out, and then you tour to support it. Then all of a sudden, my tour schedule was just whacked by two years like everybody else, and as an up and coming artist, that hurts. Metallica is still going to have people listen to them. But for someone that has just come out, you could be forgotten. So, it’s really important for me to see that I am not forgotten. With all these dates I have coming up and all the support that I get, it’s fantastic, and it makes me feel really good and very proud of my work.”

Tara describes her approach to songwriting as starting with the riff. “I have a beat in my head, I have a riff in my head, then I build on that riff and the melody, and it naturally flows in. I record track by track, and that is how I build my songs. I may or may not have lyrics first. I don’t have any order in which I do things. It just comes out of me.

“I have such a bizarre way of doing things that I pretty much just need to be left in my studio to do it. So when guys like Vinny [Appice] and Phil [Soussan] and Glenn [Sobel] and Bjorn [Englen] and Tony [MacApline] and Mark [Boals] get a hold of a track to listen and learn, it’s basically a finished demo.”

Tara met Steve Vai through the Hollywood Arts Foundation, “a charity we both feel very, very, strongly about,” and has had studied with him. “Steve is incredibly unique in his approach to his playing and the way he does everything in this business,” Tara says. “It was a joyful experience for me. He’s been to my house. I’ve been to his. Steve has complete and total command of what he’s doing as if it’s effortless and it’s always flawless.

“But let me tell you, he works his ass off. He has not only worked on his guitar playing skills, but his entire person with meditation and things like that, just becoming very zen in life. He is just a truly beautiful human being inside and out. A lovely man.” 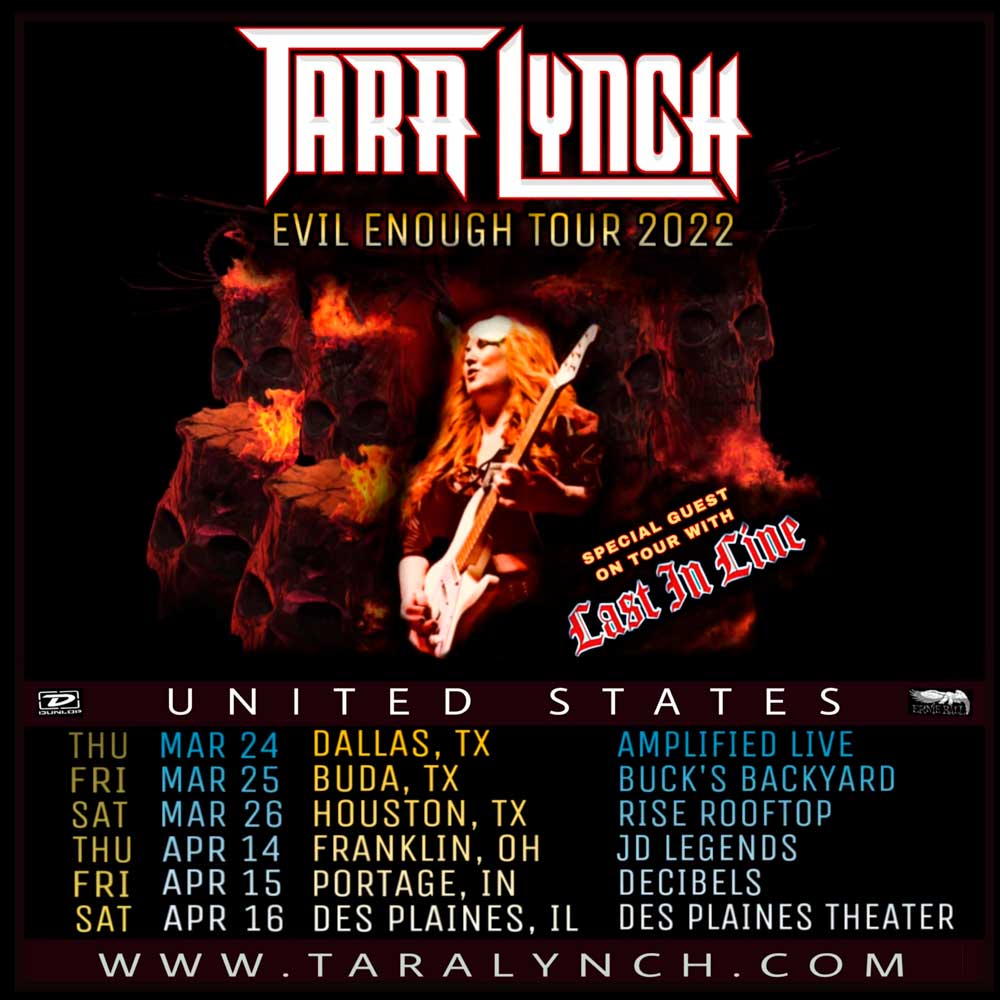 Tomorrow, the live stage beckons, and you know that Tara is wholeheartedly excited to get back to meeting audiences and sharing her talents. “When I’m out there playing,” Tara says, “I will always come out and greet my fans after the shows. I love to get up close and personal and meet everybody. I always go and hang around after the show near the merch booth.