Just in case you’re not sick of us mentioning the weather by now, since our last article it has stopped raining, started and stopped again, been sunny for a short time and then rained again and then rainbowed.

Rainbow were the very first band ever to headline Donington Park, way back in 1980 at the inaugural Monsters Of Rock festival and Ritchie Blackmore sacked his PR after that gig for laughing at an article that made fun of his hair. Or was it a wig?

Well the ground at Download this early evening has now turned very syrupy since Trivium left the Main Stage after delivering the kind of quality performance we have come to expect from them. They sounded absolutely brutal today and brought the Metal while the rain took a welcome break. 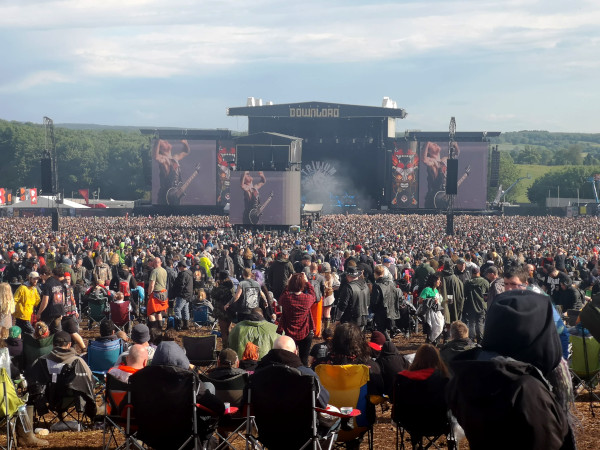 “Fourteen years ago it all started here and we will never forget that, so thank you,” says frontman/guitarist Matt Heafy, who has continually acknowledged the UK’s major part in the success Trivium have enjoyed. Long may it continue.

Matt played his seven-string guitar with the speed and energy of a man possessed, leaving all in attendance very impressed as the mud turned into sludge and the ground arons the Main Stage began to resemble quicksand. A winning performance from an excellent band. 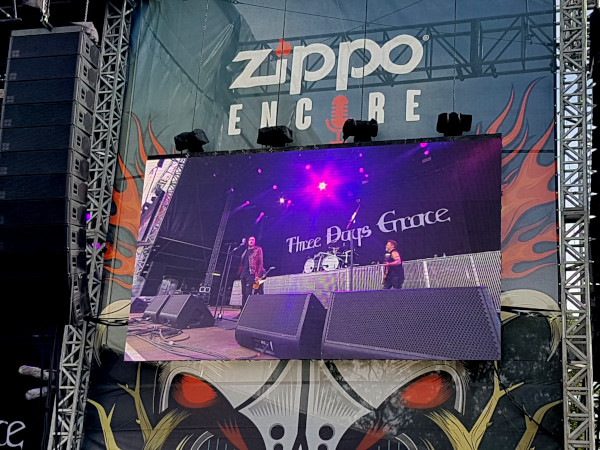 A light aircraft circled overhead carrying a banner saying “Jesus calls, will you follow?” Nobody did and right on cue, a guy walked past in *that* Cradle Of Filth t-shirt… just as Canadian rockers Three Days Grace were about to take to the Zippo Stage.

Unfortunately TDG suffered some tech issues and it took a while before the sound was balanced but the band soldiered on and delivered their set, full of the recurring themes of love and pain, with the guts and grit of true rockers.

“We are from Toronto, Canada and we brought the sun you can enjoy the good life,” proclaimed frontman Matt Walst but the soundman won’t be enjoying the good life tonight as the vocals were cut too low in the mix so the band could not avoids losing a bit of edge. Check out the albums, as they come across on record far better than they did today.

These heavy metalists used to walk around #downloadfestival biting heads off bats before bathing in gallons of Jack Daniels with Pamela Anderson lookalikes. Nowadays they’re in ponchos like school kids on a day out to Alton Towers #gamesgone

If you’ve been following our coverage to date, you’ll be aware of our speculation that bands will announce tours just after Download; well it’s already happened as Zebrahead announced a UK tour for September/October after their superb set at Download today.

Something else we can predict with confidence is that Slipknot will give Download something to remenber tonight and you’ll be able to read all about it in our next article later this evening.

Die Antwoord are currently on the Main Stage and are the last band before Slipknot. They’re trying to teach the crowd a rap in Afrikaans and the anti-system and uber-controversial South African duo have thousands of people waving in time while others say it is the weirdest thing ever seen at Download.

Our Download coverage so far is right here and you can expect the constant updates to continue throughout the rest of the weekend.