There’s possibly never been a better time to listen to a live album, although some may feel it’s a dual edged sword, reminding us what we are missing whilst filling that visceral itch for the thrill of the volume and fellowship of a crowd pressing against the barrier.

Prog Metal supergroup Redemption make all those dreams become reality as they absolutely crush it with this sparkling recording of their ProgPower headline set from 2018, strewn with hand picked gems from their back catalogue and a surprise or two.

What you get in this DVD/CD package is their full set and the titans are joined by some very special guests that made this very much a night to remember, the whole thing captured in all its technicolour glory. 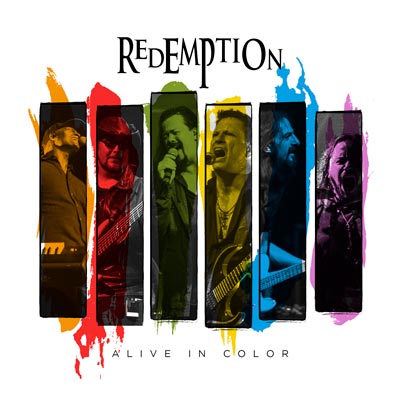 From the pneumatic opening riffing and furiously driving bass of ‘Noonday Devil’ you are immediately thrust into the heart of the action, the band giving no quarter.

Make no mistake, this is a group of virtuosos and at times the playing is dizzying in its display of musicianship, each member of Redemption shining, frequently seeing guitarist Nick Van Dyk and keys player Vikram Shankar trading licks in a furious trade off.

No less impressive are rhythm section Chris Quirarte and Sean Andrews, whose drums and bass relentlessly drive whilst adding their own very individual flourishes, especially in tracks like ‘Suffocating Silence’ and the tumultuous ‘Walls’.

Newer to the fold is frontman Tom S Englund, the Evergrey frontman stretching out from his day job with the Swedish giants by joining this troupe in 2017 and it is a perfect fit, his emotive and powerful vocals bringing massive warmth and a rich palette to the material.

His contribution to ‘The Echo Chamber’ and an absolutely epic ‘Someone Else’s Problem’ highlight exactly why he is one of the most highly respected singers in the business, bringing the same edge that he brings to Evergrey.

A frantic ‘Little Man’ and the Prog Metal suite ‘Long Night’s Journey Into Day’ leave most bands in their dust. A mix of elements of Dream Theater, Clutch and Slayer, the brew is both unique and utterly intoxicating.

The band are joined by former frontman Ray Alder for a run through of ‘Threads’, the joy tangible and ex Megadeth six stringer Chris Poland joins in for ‘Indulge In Colour’ and a pulsating ‘Peace Sells (But Who’s Buying)’ which captures all the fire and menace of the original.

The set closes with compelling and sweeping ‘The Fullness of Time – Part 3’, that soars and swoops in a grandeur that is absolutely breathtaking.

A powerful live statement, ‘Alive In Colour’ capitalizes on its broad appeal, sure to grab the attention of Metalheads and Prog fans alike, the perfect storm of sound and fury.

Intelligent, dazzling and hard as nails, Redemption have released a work worthy of joining the ranks of some of the very best ‘in concert’ snapshots of a band at its peak.

Jupiterian / The crushing heaviness of 'Protosapien'