The past five years have been pretty grim for lifelong fans of Motörhead. With the classic line up of Lemmy Kilmister, Fast Eddie Clarke and Phil ‘Philthy Animal’ Taylor all sadly departed, surviving members of the most recent line up Mikkey Dee and Phil Campbell are now the bands front of house ambassadors.

With Dee now sitting pretty bucket banging with the Scorpions, Campbell has been keeping it to eleven with his Bastard Sons’ Todd, Dane, Tyla and vocalist Neil Starr.

MetalTalk spoke with Neil Starr (See below) about releasing the new album in COVID-19 times and Starr tells us of his love and appreciation for this big Metal Family.

‘We’re The Bastards’ follows 2018’s ‘The Age Of Absurdity’, and just as opener ‘Ringleader’ straight away put you on the floor, the obnoxious growl of the title track has exactly the same effect here. 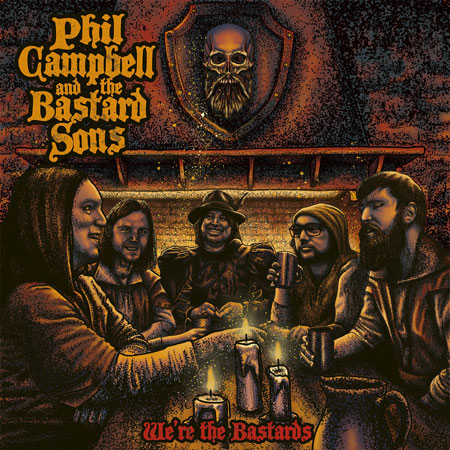 The Motörhead instincts remains intact on the pulsating ‘Son Of A Gun’ and ‘Animals’, with Campbell showing he is as bloodthirsty as ever for the loud and fast.

A beautiful tale of hatred lies in the riff doused ‘Bite My Tongue’ which is just a 0% bullshit Rock tune with just the right dose of tongue in cheekiness.

The Welsh valleys come alive with the sound of Southern Rock on ‘Desert Song’, featuring Campbell completely bossing it with a superb fully leaded guitar solo. ‘Keep Your Jacket On’ emanates that early AC/DC freewheeling vibe, pure as it comes and full of piss and vinegar.

With the album recorded and engineered during COVID-19 lockdown, you can fully sense an extra impetus in the band’s delivery, none more so than vocalist Neil Starr who tears a new one on ‘Riding Straight To Hell’ and the full throttle darkness of ‘Hate Machine’.

Delivered at a rate of knots and with a barrel load of “f**k you’s”, ‘Destroyed’ does not need much more describing, other than keep it out of reach of children.

‘We’re The Bastards’ is like being relentlessly kicked in the head with a size 15 jackboot and every blow is sweeter than the next.

This album is the ultimate stress reliever for those who like to unwind with a bit of barbarity.

So do yourself a favour and crack open a can of special brew, put on your smelliest denim and get bastardised with Phil Campbell and the anarchic fruit of his loins.

Phil Campbell and the Bastard Sons emerged in 2017, landing a slot on the 2017 Guns N’ Roses stadium tour.

Vocalist Neil Starr told MetalTalk: “Phil could easily have done something else. He could have joined another band or even just stopped, but he was not daunted by the prospect of starting another band, because it didn’t make any difference to him – he just wanted to enjoy playing music with his Sons.

“Even when he was still in Motörhead, he really enjoyed playing music with his Sons. So really, from the start, we have just done our own thing and enjoyed it.”

The Bastard Sons released their debut ‘The Age Of Absurdity’ in early 2018, to great acclaim.

“It’s been amazing how much people have enjoyed the songs,” Starr grinned.

“We have never had any expectations, so maybe that is liberating in a way. We have just written some songs, played some shows and had a good time. We knew people would check us out, but we have seen, over the years, that people are there for our songs as well.

“At the start, I guess a lot of people came to hear Motörhead songs, but now they are singing all the words to our songs and that is great.

“So we have that backbone of support there.

“It is definitely great to know that we have an audience now. We know there are people that want to hear it [‘We’re The Bastards’], but the truth is that we just had fun with it.

“Once again, we made the record we wanted to make and it has been really exciting.

“Also, we really wanted to do something in lockdown, because there was nothing else happening! We have got a studio in Wales that Todd owns, so we said ‘Let’s do what we can and make the best of a bad situation’.

“When we did the first album there were a couple of songs where we thought, ‘Oh, I don’t know how this is going to go down.’

“There’s a song called ‘Dark Days’ on the first album and we really liked it, but we didn’t even know if it would make the album until we finished recording it!

“It was maybe a bit too different from what people probably wanted to hear, but it turned out to be a fan favorite. So this time we knew that writing stuff like that was not risky in any way.

“So songs like ‘Born To Roam’ are kind of in that vein. They are not typical, fast Rock ‘N’ Roll songs.

“Last time we weren’t sure, but now we know we can do all of those things.”

With the new album completed, there could only be one song chosen for the album title. Opener ‘We’re The Bastards.”

Starr told us: “Yeah, that was basically the only one on the list. Everyone agreed it was perfect for the album title.

“The funny thing for me is that on this album, and the last album, I had complete control, lyrically and melody-wise.

“But when Todd sent me the music for that song, he said ‘I’ve got a melody idea and some words for the chorus…’

“Then he sent me the chorus down the phone, singing those words and I just knew people would love it. As soon as I heard it, I knew there was no changing it!

“So I wrote the rest of the words, based around that idea of camaraderie, the fans and the crew and the band together.

“It’s going to go down really well and become a bit of an anthem, I think!

“They probably won’t play it on the radio, but then we’ve got ‘bastard’ in the band name, so we’re not doing ourselves any favours anyway [laughs]”

Launching the album during COVID-19 has its problems, obviously.

Starr said: “It is definitely a weird time to be releasing it, because we haven’t had any rehearsals, which is usually what happens.

“It’s a strange time and we are not 100% sure when touring is going to happen. It would be sad to not be able to tour the album for a while, but we are just pleased that we could record it.

“We did not want to delay releasing it. We can still make physical copies and stream it everywhere, so there’s no reason to delay it.

“Worst case scenario is that people can have longer to get familiar with it, so when we do come out it’ll be even better!”

And the Metal family have firmly taken The Bastard Sons into their hearts, something which Starr is beautifully aware of.

“The good thing about this genre is that people are very supportive.

“If you put on great shows, people will come and see you again. If you put a good amount of effort into everything and try to give them something good, they appreciate it.

“Our fans are going to want vinyl and stuff, you know? So hopefully we’ll have a few cool colors on offer! The fan base will stick by you, even if they don’t have the money they used to have, even in tough times.

“It’s such a cool scene to be in. It’s unique, I think. We’re very happy and proud to be part of it.”