ARE YOU READY TO PARTY? If the answer is yes, then this is DEFINITELY not the album for you. Paradise Lost have been at the forefront of the British Doom/Gothic Metal scene for over three decades now.

The closest they ever got to releasing a party album was with ’97’s ‘One Second’,  followed by ’99’s ‘Host’, where they had a flirtation with Depeche Mode style electronica. Subsequent albums have seen the Halifax veterans stick more to their Gothic roots.

Maturity hasn’t meant becoming lazy for Paradise Lost. They have been perfecting their craft and it’s been, for the most part, very successfully done.

Gregor Mackintosh’s songwriting is just sublime these days, as he has an almost uncanny knack of knowing just how much oomph to give a song. Album opener ‘Darker Thoughts’ is a perfect example of this. A picked acoustic guitar along with subtle strings welcome us to Nik Holmes’ beautiful whispered, clean baritone voice.

The song slowly builds until a crunching riff explodes and Holmes’ vocals take a turn towards his growl. It’s compelling stuff indeed and the structure and pace of the song just drags the listener in.

‘Fall From Grace’ could easily have been lifted from their ‘Draconian Times’ album and ‘Forsaken’ fools the listener with a pure church organ intro, which turns into a melancholic melody and a chorus that could have been on Paradise Lost’s party album ‘One Second’.

The band have been really clever with ‘Obsidian’, by giving their fans a snippet of most of the musical avenues they have travelled to date. That’s not to say that this album will only be enjoyed by Paradise Lost fans. ‘Serenity’ has more than enough riffage and growls to keep the more Metal of Gothic rock fans happy.

‘Hope Dies Young’ has an almost cheery keyboard line, despite the song’s mournful title, while ‘Ravenghast’ closes the album in gloriously mournful style.

While they may not sound like a party band, Paradise Lost are most definitely a force of nature.

They have a very recognisable signature sound and the reason it is so recognisable is that plenty of other bands have copied it.

‘Obsidian’ is a class album, from a class act. Like a fine wine or a malt whiskey, Paradise Lost just seem to get better with age.

Watch out for our interview with Nick Holmes, coming very soon to MetalTalk.

Paradise Lost and Moonspell to hit the UK in February

KINGS OF DUST: GREG CHAISSON – IF RAY WAS STILl ALIVE THERE WOULD HAVE BEEN MORE MUSIC FROM BADLANDS. 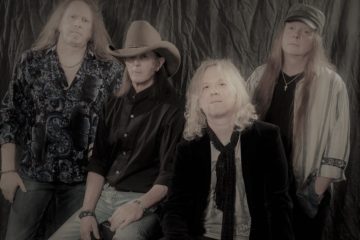