Legendary UK Heavy Metal four piece Orange Goblin are refusing to let COVID-19 scupper all their plans for their 25th Anniversary party and have told us that there will be two special Live Streaming shows in November, with very limited tickets available to watch the band perform at The Dome (Tufnell Park, London) in person.

In September, Ben Ward told MetalTalk that he had no choice but to postpone the live and loud parties planned for the big celebrations.

Ben told us: “We wanted to wait as long as possible to see whether we would be given the go ahead, but with no clear indication that full capacity shows will be allowed by then we now have no choice but to reschedule for December 2021.”

But, rather than just postpone the whole thing, there are now two special nights of Heavy Metal planned will will celebrate all stages of the bands career.

This week Ben updated MetalTalk: “2020!! The world has gone to shit and any plans we had to tour and celebrate our 25th Anniversary seemed to have gone with it. Until now!

“Thanks to the fine folks at Hotel Radio and Old Empire we are very happy to announce these two very special live stream shows from The Dome in London on the 15 and 16 November!

“Each night we will celebrate a different era of the band, with songs drawn from each specific period to make sure both nights are truly unique.

“As well as being able to broadcast across the world, we are thrilled to be able to invite a select few people to be able to actually attend the shows, thanks to the socially-distanced regulations at the venue.

“There hasn’t been much for people to get excited about this year, but we hope that this will give the Orange Goblin fans something to look forward to and we promise that there will also be other little treats both online and at the shows for those who get involved!”

The first night, under the banner of ‘From Planet Ten….to the House of God’, will focus on the early material from their time with Rise Above Records.

The second night, called ‘They Come Back….The Filthy And The Damned’, will cover pos-Rise Above material all the way to their latest album ‘The Wolf Bites Back’.

To whet your appetite, you can re-watch Episode Seven of MetalTalk TV, where we spoke with Ben in lockdown . He takes us through the journey of how the band formed and remained with the same line up from it’s inception in 1995, with the exception of guitarist Pete O’Malley, who left in 2004 following their US tour.

We also talk about the Orange Goblin sound and their prosperous and extensive career, culminating in trying to celebrate their 25th Anniversary and releasing a live album to mark the occasion.

Ben also talks about touring, and every aspect of fame; the good, the bad and the ugly. 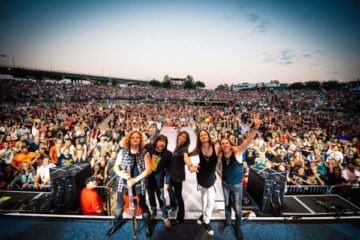