What originally started as a series of online, live-streaming solo performances from Canadian maverick Devin Townsend to raise funds for a Canadian hospital, one in New York and the NHS during the first lockdown last year, has now reached concert number seven. We’ve had a Halloween special, a Christmas special and now this, a complete run-through of Dev’s first solo album, ‘Ocean Machine’.

During his introduction to this show, Devin says that he’s always trying to mix it up and keep it exciting and, with that in mind, has started with his first solo album, and he’ll take it from there and see how many he can get through.

Standing on the sun balcony of The Farm studio in Vancouver in glorious sunshine, a drone swoops down and picks out our hero. We are told that the ‘Puzzle’ album has just has been completed with producer Garth Richardson, and off we go with ‘Seventh Wave’ in all its shimmering pop/rock shine.

Devin re-recorded all the backing tracks for this online gig and played along with guitar in hand and his magnificent voice. The setting is beautiful – The Farm is a studio set in a forest with the ocean in the distance, and the views from the sun balcony are nothing short of spectacular.

Those familiar with the ‘Ocean Machine’ album will have their favourite tracks, but there are three tracks in particular that everyone agrees are magnificent, and they are – ‘Funeral’, ‘Bastard’ and ‘The Death Of Music’.

Devin says at the start of ‘Funeral’, “This song, as always, is dedicated to Jesse Cadman.” Jesse was Devin’s high school friend who was tragically killed aged 16, and ‘Funeral’ was written as a release for Devin’s emotions.

It’s clear for everyone to see that the emotions are getting to Townsend as he performs this one, stepping back from the mic a couple of times, missing out lines and turning his back to the camera. Garth Richardson, watching the show from inside the studio, obviously sees what’s happening and intervenes. Some small items appear from the studio door and land just in front of Devin on the sun porch, swiftly followed by a beautiful black Labrador called Cooper. It’s treat time for Cooper, and you can see the palpable relief on Townsend’s face as he has a quick chat with the dog, then continues with the song. At the song’s close, Townsend apologises to the audience, where no apologies are necessary at all. We feel the power and sentiment of the music with him.

‘The Death Of Music’ is just a study in vocal technique, complete with emotion. I caught Devin’s show at Hammersmith a few years back, where the Devin Townsend Project played the whole of Ocean Machine live, and this was a highlight then. Things haven’t changed with this live stream. It’s such a captivating song to begin with, with its sparse musical arrangement and only the vocal subtleties to guide us through it, yet Townsend seems to make it look effortless.

The album proper ends with ‘Things Beyond Things’, which is a gorgeous ballad and ends with the Devil’s scream, which Townsend pulls off admirably here.

He then says that fans were telling him that as he was going to be performing the whole of ‘Ocean Machine’ live, that he had to play the song ‘Ocean Machines’, which should have been on the album in the first place, but Townsend couldn’t rescue the master tape from the studio owner at the time.

He thought that was a fantastic idea, only for him to forget about recording the backing tracks for it. Instead, we are treated to a snippet of a very impromptu acoustic version of ‘Ocean Machines’, and with his goodbyes and thanks, we are finished.

Townsend is always a fantastic entertainer, and these live stream events have more than proven that. As promised at the very start of the show with an “I’ll start with Ocean Machine and plough through my catalogue”, here’s hoping the next Devin live stream is ‘Infinity’ live. 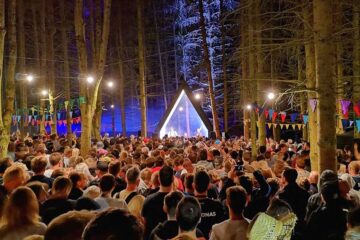