No conspiracy here, as Endseeker deliver a superb and essential listen

Following hard on the heels of 2017’s ‘Flesh Hammer Prophecy’ and 2019’s ‘The Harvest’ German Death Metal band Endseeker return with vengeance with their third studio album ‘Mount Carcass’, using, as many Metal bands have also wisely done, the down time due to the pandemic to create their latest offering.

The band told MetalTalk: “The [album] title, and the lyrics of the song it is drawn from, is a metaphor for our modern society. Using the image of the ascent of Mount Everest, we are living in a crazy world driven by the hunt for money, success and recognition, led by elected madmen. It is a time of political change and global challenges full of uncertainty and a constant threat to our comfort zones.”

For this release they have aimed to create something rawer and more organic than ‘The Harvest’, with songs that are quite straightforward with a slight Crust Punk feel alongside the old school Swedish Death Metal vibe, Melodic, but stripped back with no excess, the result is definitely a catchy and easy listen that is hugely engaging.

The band told us “It is way simpler and probably easier to listen to compared to ‘The Harvest’ or ‘Flesh Hammer Prophecy’, but at the same time it has a very spontaneous and lively attitude with a big chunk of personality. You can hear all kinds of stuff that is inspired by bands like Morbid Angel, Bolt Thrower, Slayer, Dissection, Gorefest, etc.

“We listen to so many different bands and somehow a bit from all of this keeps adding to our music.” 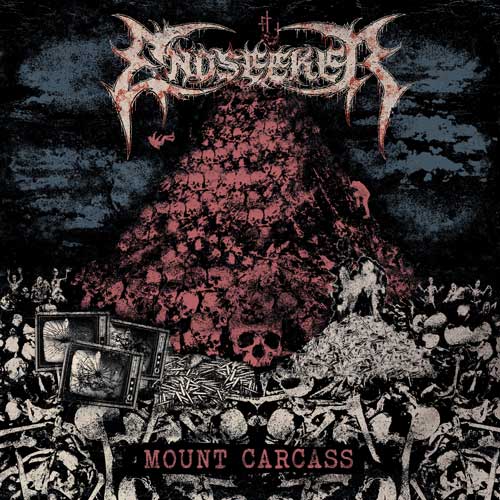 Unusually for Endseeker, they have worked in a political edge in places. Lets face it, in these times it is hard not to if we are honest, but it is subtle and they approach it in true Metal style. You also get the typical Endseeker songs which deal with crazy animal behaviour or the opener ‘Unholy Rites’ which has classic zombie lyrics, so fans should be happy all round with this album.

‘Mount Carcass’ is a nine-track offering that delivers a fully engaging thirty-five minutes. Opening on the previously mentioned ‘Unholy Rites’, an up tempo driving and engaging track with an addictive repeat and a haunting swathe of second half lead work all of which makes you want to hear more of the album.

‘Merciless Tide’ is about the growing world of “so called conspiracy theories” and references Pizzagate, QAnon, Flat Earthers and more.

Endseeker said: “during the whole pandemic it seems like a growing number of people are getting hooked by this stuff. The fascinating thing about all this is that all sides claim for themselves to be in possession of the one and only truth and knowledge. This whole conspiracy thing has a lot of potential for escalation and can easily move into a dangerous direction and it goes so far that people turn violent and somebody gets hurt. That is what this song is about.”

I think it is a great subject for a Metal song and here it is delivered with sinister acerbic intent, thanks to haunting riffs and a bleak chugging undercurrent, as well as an addictive delivery finished of with a sinister swathe of second half leadwork.

The onslaught continues with ‘Bloodline’, a punchy brute of a track with a dark undercurrent and punctuated with engaging melodic swathes. One of my favourites of the album, it smoulders with sinister intent.

Title track, ‘Mount Carcass’ the band told us is “on the surface, about the commodification of ascending Mount Everest and the business this has turned into. With too many licenses sold, at about €40,000 each, traffic jams of climbers are forming at high altitude, with deadly consequences.

“All very ambitious climbers, spending a small fortune just to stand on the roof of the world for a few minutes. Some pay the ultimate price for it and freeze to death after collapsing in the waiting queue in the death zone and most of them will stay on the mountain forever because it is hardly possible to recover dead bodies from there.

Bizarre enough, but this also reflects the whole business mentality of the entire first world. Growth, success, profit, being on top and literally stepping over corpses. That is what makes the world go around.”

So, a double message to a track which has a manic convoluted quality.

Another favourite of mine across this altogether very listenable album is ‘Count the Dead’ which has the catchiest dirty groove and chug imaginable, punctuated with reflective melodic flourishes emerging between the gravelly vocal delivery and haunting second half leadwork. A deceptively powerful track.

‘Cult’ brings things up a notch with its up-tempo punchy drive, engaging riffing with contrasting groovy undercurrent and spiralling lead bursts while ‘Moribund’ boasts solid drum rhythms and intense riffing alongside a protracted acerbic scream which grab your intention at the very start of this old school tinged, addictive brute of a track.

In true ‘Endseeker’ style, a song about animal behaviour, ‘Frantic Redemption’ which is about a famous bear nicknamed ‘Pablo Escobear’ who died from eating $15 million worth of cocaine. The band said “we read about this incident from 1985 at some point on the tour bus and were absolutely fascinated by this story, so it was crystal clear that we had to make a song about this.” And as the title suggests, it is an up-tempo beast of a track that is addictively convoluted and brutally delivered.

As fans will know, Endseeker love to drop in a cover and for this release they have chosen the iconic soundtrack from ‘Escape from New York’, the title track of John Carpenter’s seminal science-fiction movie. It is an unusual choice, being an instrumental, but 2021 is the 40th anniversary of John Carpenter’s masterpiece and it makes a great album closer. They have done a superb job of “Metalling up” the theme tune and they have maintained the haunting eerie quality, but have added dirty depth.

I think John Carpenter would approve and I really love this interpretation. It is modern and chunky, but true to the original.

Like both of its predecessors, ‘Mount Carcass’ was recorded, produced, mixed and mastered by Eike Freese at Chameleon Studios in Hamburg, Germany.

Overall, a superb and essential listen.

No conspiracy here, as Endseeker deliver a superb and essential listen 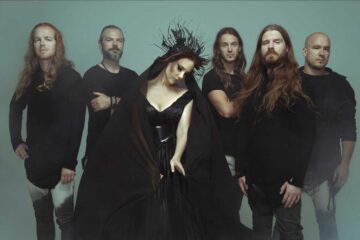