Fill My World is the second single from the album, following the October release of The River Is Rising.

“Musically, I came up with it [Fill My World] at my studio,” Slash told MetalTalk. “It was just the opening riff, and then the underlying chord changes started to come out in my mind. I wasn’t sure if I was going to pursue it or not, but I had to record it and make a demo. I thought I didn’t know what the guys were going to think because it has a certain sentimental kind of feel to it.

“But I sent it to Myles, and he came back with these heartfelt lyrics. I thought it was about the loss we’ve all been suffering during this dark period, and then he told me it was about his dog. [laughs] I said, ‘Well, you know, everybody has had somebody that they love affected by this, so…'”

“So, I have this,” Myles Kennedy said. “He tries to act all tough, but he’s really not. And on one occasion we couldn’t get home, our flight was delayed, and there was a really intense storm over our house.

“We have one of those little camera systems to keep an eye on the dog when we can’t be there, and we saw him just freaking out. It was heartbreaking to watch. It terrified the little guy. So, the narrative of the song is inspired by what I imagined he might have been thinking as it all went down. And his plea to us to come home.

“When you listen to it, it could apply to a relationship between humans. But I thought it was interesting, at least for me, to sing it from Mozart’s perspective. And to be really honest, as I was singing the song in the studio, at one point, you can hear my voice crack a little bit. It was getting to me. So, it’s definitely sung from the heart. And I’m man enough to admit it.”

Earlier, the band released their first single, The River Is Rising, along with a video shot on location in downtown Los Angeles with Gibson TV director Todd Harapiak.

“There are two or three songs on the record that were written during the pandemic,” Slash said. “Everything else was written before. The River Is Rising was one of the last songs I wrote before we started pre-production, and because it was so fresh and has a certain groove and energy to it, it was the first thing we really attacked.

“It’s the newest song on the record, and as for the double-time part, that was something that I came up with and tagged onto the end of the arrangement. Then when we were over at RCA, Dave Cobb suggested we do it right after the breakdown. So, we went straight into the fast part, and I just started doing the guitar solo over it.

“It was one of those things where we were jamming around, trying to fish out the arrangement, and it just happened.”

“The lyric ultimately explores how humans can be brainwashed or indoctrinated by some sort of dangerous idea,” Myles Kennedy said. “Once we shot the demo back and forth a few times, I personally felt confident that we had the album opener. To me, it’s an important track.”

US Tour Tickets are available from slashonline.com/tour/

To pre-order the album, visit slash.lnk.to/FillMyWorldID 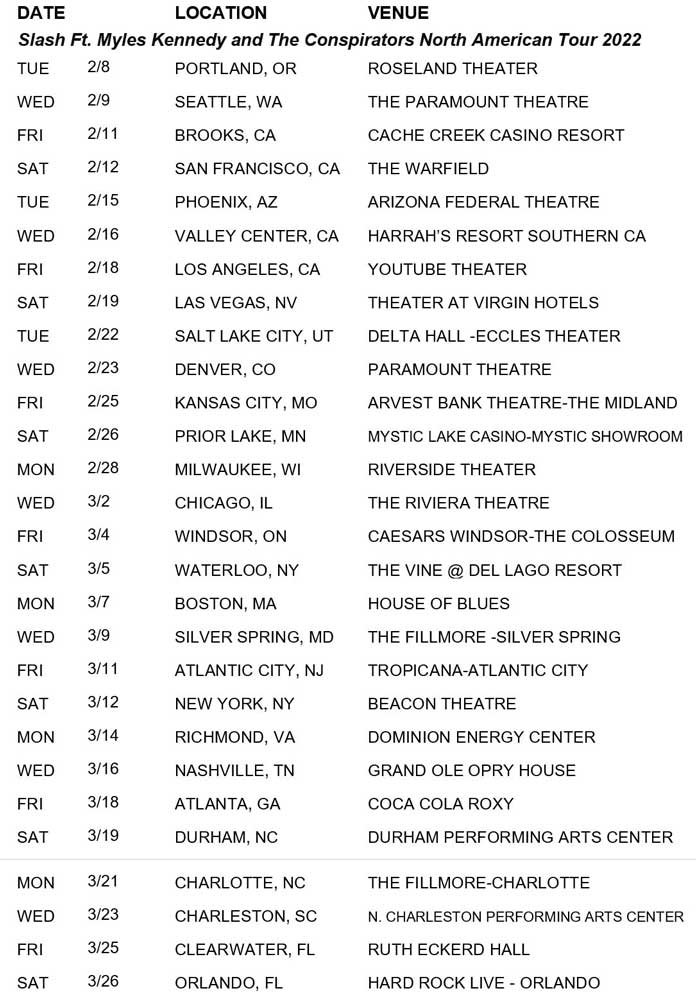