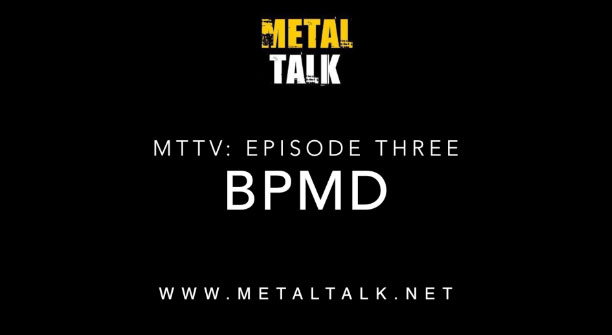 For the third episode of MetalTalk TV, vocalist Bobby Blitz, guitarist Phil Demmel and bassist Mark Menghi tell MetalTalk how they are coping with lockdown, the recording process of their debut album, the state of modern Metal and the birth and legacy of Thrash.

Bobby Blitz: “Well I haven’t worn pants in two fucking weeks. I know its a tough time everywhere but it’s business as usual”.

On recording the songs:

Mark Menghi: “The vibe that Phil and Mike Portnoy got inspired me and I tried to do my bass tracks in one or two takes. That’s what makes those 70s records – you had to have your shit together as a musician”.

On the modern Metal scene:

Bobby Blitz: “I think it’s a very healthy scene at this time. Metal has never been more popular, whether its the bands from the good old days or the present day. You have to embrace the technology and the changes”.

On the legacy of Thrash Metal:

Phil Demmel: “Being around to see the Metallicas and the Slayers rise up was amazing. Now anyone can record an album on their laptop and put it out but back then you had to be fucking good”.

On plans for the future:

Bobby Blitz: “We’re working on some tunes for Overkill. It’s still my go to project and it really completes me as a person. Right now we’re nine songs into the demo”.

Phil Demmel: “Vio-lence just signed up to do a five song E.P. and we’re about four songs down. We’re not on any fixed schedule and it is by far the most ambitious stuff we’ve ever written”.

Mark Menghi: “Well Alex and I have planted the seed for Metal Allegiance III and we’ve started trading riffs. Once this virus blows over we’re going to start formulating the album”.