LED ZEPPELIN MASTERS HAMMER OUT THE GODS AT THE PALLADIUM 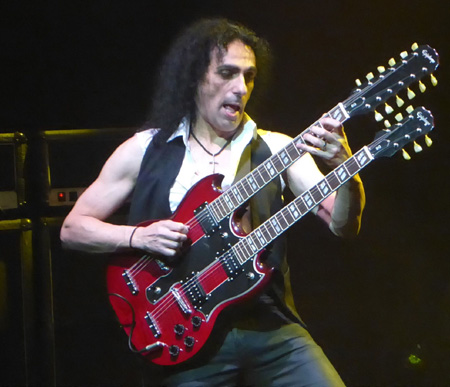 However it’s highly unlikely we that we will ever see the real Led Zeppelin, who reformed again for one last time ten years ago for the Ahmet Ertegun Tribute concert, ever tread the boards again.

That was an event which attracted a record twenty million requests for tickets, of which 18,000 fans were lucky enough to secure theirs through a lottery system to witness one unforgettable and magical evening. 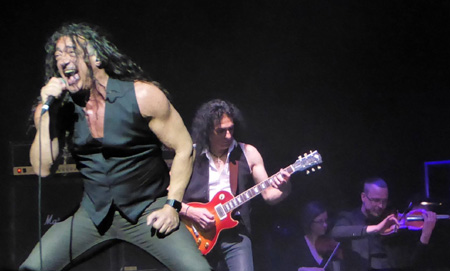 As with classical music, the sounds are immortalised with new musicians performing for a new generation long after the originqal composers have left this world. That’s the future of classic rock whether we like it or not.

More recently there have been West End shows of ‘Sunny Afternoon’ featuring music of The Kinks, ‘All Or Nothing’, a similar musical on the Small Faces and there’s the forthcoming rock opera ‘Bat Out Of Hell’ which will bring Jim Steinman’s masterpiece to a whole new audience for years to come long after Meat Loaf becomes a faded memory.

Don’t be surprised that in a decades time there will be shows called ‘Highway To Hell’ complete with hell’s bells, school uniforms and exploding canons or ‘Number Of The Beast’ with a marauding Eddie stalking the stage. The players will change but the song remains the same.

It’s not just about putting on West End shows. Both the Australian Pink Floyd and the Bootleg Beatles have totally maximised on the demise of these band by regularly filling out the Royal Albert Hall, such is the demand to hear their music in a live setting. 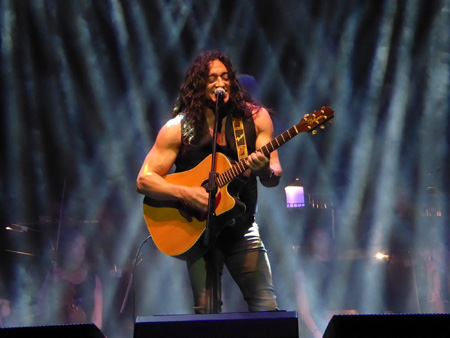 There’s a plethora of Led Zeppelin tribute acts doing the rounds but none that come complete with a thirty-five piece orchestra.

Hailing from way, way down inside Australia, the Led Zeppelin Masters have sold out two nights at the Sydney Opera House and were in the UK for their first visit.

The audience at the London Palladium is full of t-shirt clad Led Zeppelin fans in their in their fifties and sixties but more tellingly, a large percentage of them have brought along their sons and daughters who are here to witness the majesty of Zeppelin’s music for the very first time. It’s the closest to the real experience they will ever get.

Thankfully the Led Zeppelin Masters make no attempt to look like messers Plant, Page, Jones and Bonham. The sound lacks the raw danger and aggression of the original but is full of heightened passion and enthusiasm that makes the music come alive. 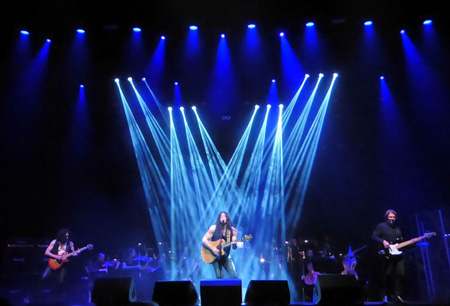 With long black curly locks and muscular arms, vocalist Vince Contarino would look more at home fronting a Manowar tribute act but he makes himself heard as his band brazenly open with the ten minute barrage of ‘Achilles Last Stand’ which was an inspired move, before going to the other end of Led Zep’s spectrum with the more delicate ‘All Of My Love’ where the Black Dog Orchestra added soothing strings with additional perky keys from Paul Gray.

The orchestra works really well with the two extremes of both the lighter and heavier sides of Zeppelin’s music, as typified on the acoustic stride of ‘The Rain Song’ and the thunderous ‘Kashmir’ that made a storming entrance in the second set.

Guitarist Tzan Niko handles the red double neck with ease on ‘The Song Remains The Same’ and later on with a surprisingly good version of ‘Stairway To Heaven’.

Led Zeppelin Masters play safe by sticking to the vinyl cuts rather than the improvised live album versions but that doesn’t stop drummer Bradley Polain from doing a banging solo during ‘Moby Dick’.

A dream setlist that covers all the aspects of Led Zep’s career from the bulldozing ‘Immigrant Song’ to the acoustic summer breeze of ‘Going To California’.

The Palladium was up out of their seats and rocking in the aisles for set closer ‘Whole Lotta Love’. This was one Led balloon that went down very well leaving the audience over the Moon.

Setlist:
Achilles Last Stand
All Of My Love
Ramble On
Nobody’s Fault But Mine
The Rain Song
The Song Remains The Same
Good Times, Bad Times
Rock N’ Roll
Kashmir
Over The Hills And Far Away
No Quarter
Moby Dick
Going To California
Stairway To Heaven
Black Dog
Immigrant Song
Whole Lotta Love