Lonely Robot is the name that multi-instrumentalist, producer and engineer John Mitchell has chosen to use for his solo work. Already a member of Frost*, Arena, It Bites and Kino, Mitchell certainly isn’t a slacker.

Lonely Robot – Feelings Are Good (Inside Out)
Released 17 July 2020

After the completion of the Lonely Robot ‘astronaut’ trilogy with 2019’s ‘Under Stars’ album, it seems that Mitchell set to work almost straight away on writing ‘Feelings Are Good’. Unshackled by the conceptual constraints that surrounded the astronaut trilogy, ‘Feelings Are Good’ is a far more personal album and is pretty much a musical therapists couch for the writer.

As John Mitchell told us “‘Feelings Are Good’ is a bit of a departure from the first three Lonely Robot albums. On ‘Feelings Are Good’, I wanted to explore more personal themes and the songs are very much about individual experiences and narratives that I believe had been the cornerstones, good and bad, to my life.

“The long tall and short of it is that we’re back on planet Earth, and I have a personal lyrical axe to grind!”

There is only one other musician on this album – prog’s goto drummer Craig Blundell (Steven Wilson, Steve Hackett), who shines like the brightest star here. Mitchell plays everything else you hear on the album. 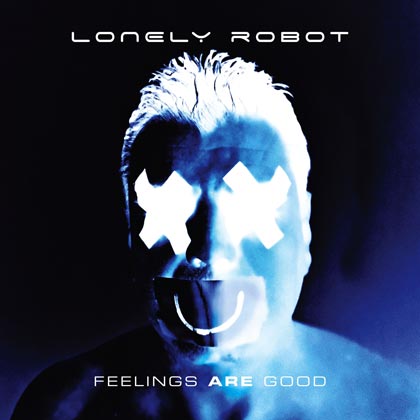 The journey begins with the title track, ‘Feelings Are Good’, which is a 1.16 long, vocal only segue into the meat and potatoes of the album proper.

Heavy on the vocal treatment, it does sound like the listener is being serenaded by the Lonely Robot of the project’s name. Then Mr Blundell makes his presence felt with a wonderful drum intro to ‘Into The Lo-Fi’ and we know we are in for something special indeed.

The lyrics hark back to a time long gone – “All this reality is killing my heart, please rewind”.

Next up we have the nightmarish images of ‘Spiders’, complete with a wonderful guitar groove. This track could easily sit on a modern day It Bites album – it has the same musical playfulness that It Bites were famous for and lyrics that really cut to the core.

A haunting piano opens ‘Crystalline’, which is fitting for a song as soul bearing as this.

Obviously no stranger to heartbreak, Mitchell sings “The seasons may come and they sure as hell go, but you can’t change the course of a heart, so I’m covered in shame and take all of your blame and I’m turning this pain into art”. He really is.

‘Life Is A Sine Wave’ is the first single from the album and it is an upbeat, groove laden look back on a life lived.

Not only are Mitchell’s lyrics throughout the album heartbreaking, musically he tears at the heartstrings, never mind plucking them. The second guitar solo in ‘Life Is A Sine Wave’ is beautiful to the point of tears.

As the chorus for ‘Armour For My Heart’ kicks in, you feel a palpable sense of catharsis which is joyous. ‘Keeping People As Pets’ is broad in musical scale and comments on abuse, control and erasing individuality.

The album ends with another very short track – ‘Grief Is The Price Of Love’, which is self explanatory.

Mitchell’s voice, coupled with just an acoustic guitar is the perfect way to end an album that cuts deeply, both emotionally and musically.

There are two bonus tracks, which are orchestral versions of ‘The Silent Life’ and ‘Crystalline’, both of which are deserved inclusions.

What John Mitchell has done with ‘Feelings Are Good’ is nothing short of extraordinary.

Never has pain and heartbreak sounded so beautiful.