I had a great chat with Karl over breakfast in LA which gave me an insight into the logistics of setting up a big tour like this. From organising the actual gigs with Dean Swett, to sorting out the van, equipment, merchandise and hotels, along with hours spent planning routes etc, to name just a few things.

Then there’s the driving and liaising with venue management on a daily basis. The amount of hours of planning this guy puts into it should never be underestimated. He also talked about the music foundation he has set up In The Gambia, which sounds amazing, giving the children out there the chance to learn and enjoy music. I will hopefully bring you something more in depth regarding Karl’s Gambia project in a separate feature in the near future.

The drive from LA to Vegas was long and hard, skirting the edges of Death Valley. The Coffin Dodgers were also en route to Vegas for their second gig out of the three, and in hindsight getting too close to Death Valley probably wasn’t the best idea they’ve had in their extremely long and illustrious careers. This was tempting fate at its best!

Along the way, reports were coming in from CDCC (Coffin Dodger Control Centre) that one of the old farts wasn’t having the best of times. Apparently the Dodger in question was extremely hungover from the previous night in LA, so much so that the emergency plastic carrier bag that one of the more wiser Dodgers had packed was brought into use.

I suppose anticipating the inevitability of such an occurrence happening was pretty easy, considering the said Dodger’s past history. To say the vomiting culprit has previous form is a bit of an understatement. I won’t name names, but check out the photographic evidence below.

The solar farms either side of the highway as you are heading into the larger than life Vegas really are a sight to behold. I guess they only go part way to supplying the vast amount of electricity required to power the twenty-four hour party city in the desert, ominously labelled Sin City.

We arrived at the venue, the LVCS, to find that the van was too high to gain access to the multi storey car park that leads to the backstage load-in doors, so we had to park in the outside car park over the road and push the gear on wheels across the road and up two slopes to get it into the venue.

It’s a good job the local boys in blue weren’t about or it would have cost us a fortune in jay walking fines!

The venue had huge glass windows on one side, looking down to the streets below and directly opposite was a restaurant called The Heart Attack Grill… ‘feeding the overweight since 1986’ in huge red letters declaring free food for people weighing in at 350lbs and over.

Now by my reckoning that’s twenty-five stone and they have scales so you can prove your weight. Check out the photo below of Dean weighing himself. Now I know he’s been hitting the mixed taco’s and peanut butter porter hard since we got here but my Columbo instincts tell me there could well be some skullduggery at work here.

The wonders of Photoshop knows no bounds and some people will do anything for a free meal.

After a band meeting in the dressing room before the gig, it was decided to make a change to the setlist with ‘Knight Of The Swords’ and ‘All Tthe Reasons You Live’ being replaced by ‘Starcrossed (Lovers Of The Night)’ from ‘Death & Progress’ and ‘Set My Soul On Fire’ from the new album.

The former was written in collaboration with Tony Iommi and is a personal favourite of mine, being classic Diamond Head in the way it builds up slowly from the beginning, changing tempo until reaching a crescendo of beautiful loudness.

The set changes show the diversity of the band, having more than enough songs ready to bring in and freshen things up at will.

The Coffin Dodgers duly arrived, amid rumours that one of them would have taken up the amazing food offer at the Heart Attack Grill due to his eligibility had he not been recovering from his aforementioned hangover.

There were four support bands tonight who all did a sterling job of warming up the crowd, however, the band that really caught my eye were the rather good Bravo Delta.

With intro tape fading, Diamond Head proceeded to thrash their way through ninety minutes of pure unadulterated ear candy that quite frankly feels like half the time.

Like I’ve said previously, I’m not reviewing each show but I just want to mention one point. During the Metal madness that is ‘Am I Evil?’, a couple of young and rather enthusiastic guys locked horns and ensued to break all pit etiquette, prompting Ras to vault the photo barrier in impressive Olympic like style and break up the two warring Metalheads, exclaiming “I’m not having that shit at my gigs”.

IT'S ALL GO-GO IN LA FOR DIAMOND HEAD 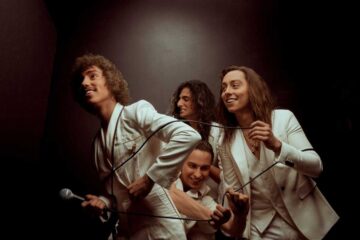