That 2020 has been a brutally harsh year is an understatement, so it makes sense, to me anyway, for one of my final reviews of the year to be of an album that is equally brutally harsh, with the debut EP ‘Screams of Misery’ from Estonian Abusecore quintet Kuritarvitaja.

The band told MetalTalk that they are proud of the fact that “‘Screams of Misery; is hundred percent ‘do it yourself’ release with all production, recording, mixing and mastering done by band’s guitarist Nossu. The cassettes and CDs, which will be released in beginning of 2021, will also be released by the band itself.” 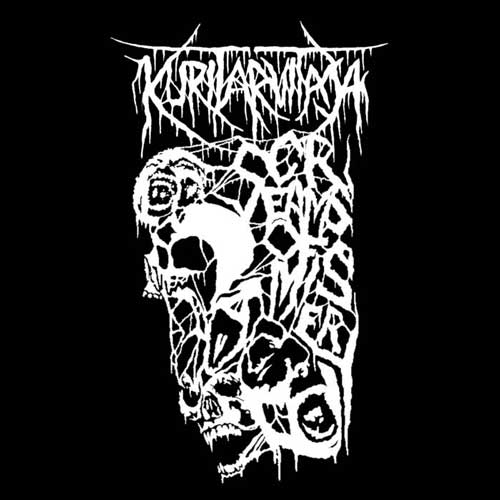 Nossu told us that, in his opinion, “this EP represents the band’s morphing from Hardcore Punk phase to a heavier, Crust Punk and Sludge Metal influenced sound and style and this also reflects in the track list. All tracks are in chronological order with their writing.

“You can feel that we are somewhat still discovering our sound and style. The sound side itself could also be done a lot better, because I am still learning to do it, but at the same time we are not chasing a traditional Heavy music sound or a sterile mix.”

Personally I do like the raw and brutal sound. It has an honest quality and as a fan of not just Metal but Punk also, I do like that raw DIY quality.

“Despite the fact that the EP is still raw and far from perfection, it is still a pure expression of the band’s emotions and ideas and gives the listener a glimpse of the direction in which we are moving musically”, adds vocalist Märt Kruusmann.

Guitarist Rauno Tali’s opinion is that “‘Screams of Misery’ is the best piece of music that has been recorded in our solar system (not counting Mercury) and that it cures cancer and eyesight.” And whilst Rauno might be a bit over optimistic, this EP definitely has a lot of positive qualities.

‘Screams of Misery’ is a six track, eighteen and a half minute offering, which as Nossu has explained, definitely shows the transition of the bands style. By the time you get to title track ‘Screams of Misery’ there is definitely a dark and filthy sludgy grind feel going on. I do like this track a lot, with no real lyrics just screams, they speak volumes and final track ‘Untitled 1’ is an exciting crusty sludgy Death/Thrash meld that advocates breaking out and not following the path of the mundane and thinking for yourself, as does the track ‘Dissident’.

Regarding the genre Abusecore, well that is a new one to me. Given the content of the lyrics, two thirds of which are in English, it allows you to grasp the context of this genre, which is fairly self-explanatory.

This happens particularly in ‘Dissolving Bodies in an Acid Bath’ which involves…. no surprises here…. the dissolving of a live individual. Gory, but a brutally good track.

As far as debut releases go ‘Screams of Misery’ is an engagingly fascinating listen, in an abusively brutal way and, for me, that is a good thing!

‘Screams of Misery’ is available to buy only digitally at the moment at https://kuritarvitaja.bandcamp.com/album/screams-of-misery