‘Set The World On Fire’ has been announced as the title of the second album from Cornish Rockers King Creature, with the band also releasing the epic ballad ‘Wisdom Told’, which you can watch below.

Pieced together during lockdown, the band have worked with John Cornfield (Supergrass, Muse) and Mike Exeter (Cradle of Filth, Black Sabbath) and ‘Set The World On Fire’ promises to be a great dose of gritty Hard Rock.

Of the new track ‘Wisdom Told’, the band told us: “Wisdom Told is a real powerful song that literally has brought tears to the eyes of all those that have listened. By design this song touches the hearts of many yet also celebrates fatherhood in the positive light in which we the band see it.

“We had a clear vision for the lyric video and a shout out was made to our fans to supply us with pictures of their fathers… needless to say we were inundated.

“We knew taking on such a subject matter was not one to take lightly and we feel we have put everything into it.

“We hope you love as it comes from the heart.” 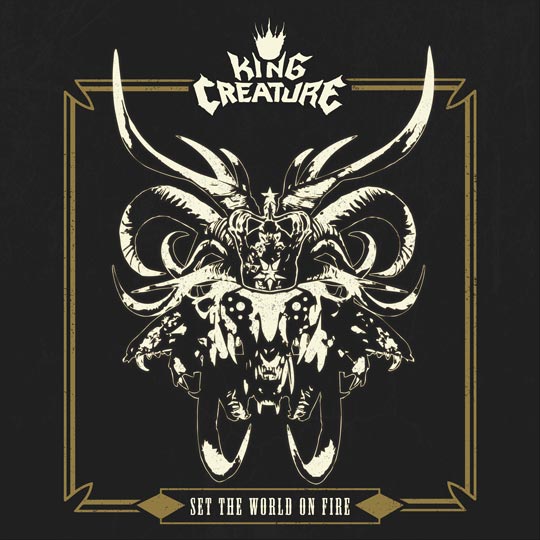 Having begun working on the album while touring with Phil Campbell and The Bastard Sons and Doro, lockdown enabled the King Creature to focus on finishing the project.

The band continued: “While the lockdown commenced, everyone at KCHQ knew that now was the time to be productive.

“We converted HQ into a makeshift studio and worked with our engineer/producer John Cornfield over the internet sending files back and forth.

“The result was the new album and singles that are all just about to drop. The album is a reflection of the country/world at that time with some coincidental lyrics that gained more notoriety after we had written them, like “I can’t breath” in the song ‘Beautiful Fatality’ which became associated with the BLM movement.

“The same happened for the song ‘No Getting Out Alive’, written before the start of the pandemic, which eerily became a thing that we all went through; again just a coincidence.

“The album in general is pretty deep and somewhat dark. We have made a dynamic shift in our songwriting as we mature and evolve as a band, yet we feel the harmonies and structure give the whole thing a lighter feel.

“In our opinion it’s a step up from our last album.”

The band are to play a sold out socially distanced show in Cornwall that will be later streamed online. Following this, they head out to play Monsterfest and tour with Orange Goblin in Winter.