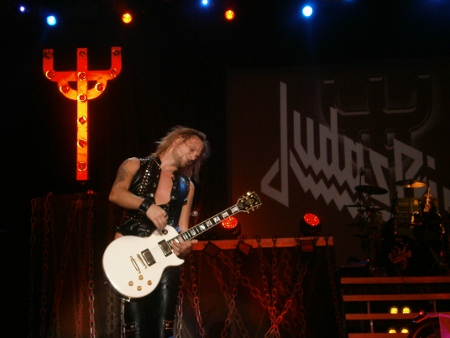 As part of their farewell ‘Epitaph’ tour Judas Priest are once again unleashed in the East, playing a handful of dates in Japan and ending the Far Eastern tour by playing a date in Singapore for the very first time in their long history. Fans have travelled from afar, including neighbouring Malaysia and Indonesia. Some have even made the trip all the way from the Philippines whilst I flew in this morning from the UK to join my expat buddies from Thailand for a night of molten Metal at it’s best. 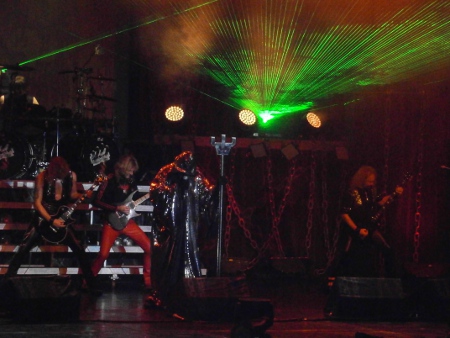 It’s not cheap to book western bands to perform here, hence the expensive ticket prices which were set at $140SD (approx 70 quid) and the beer isn’t too cheap either but the venue of Fort Canning Park is worth every dollar. Set on top of a hill overlooking the Singapore skyline it was here in these lush green surroundings, that were once ruled by Malay kings, that the British army set up their barracks and surrendered Singapore to the Japanese army almost seventy years ago to the day.

Although this is an outdoor concert, the venue has an intimate vibe about it. The stage itself is at the bottom of an amphitheatre setting meaning that everyone can get a fantastic view of what’s going on. The best way to describe it is like winning the lottery and buying yourself a mansion and inviting Judas Priest to come and perform in your back garden. 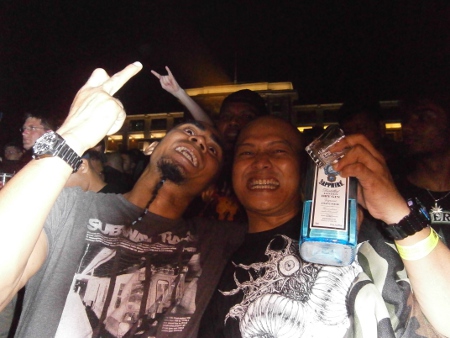 Billed as support act, American Virginian Metallers Lamb Of God still got to perform a full ninety minute set of brutal Metalic white noise that coraded the eardrums. Four new numbers from the latest album ‘Resolution’ were played including ‘Desolation’ and ‘Ghost Walking’ which opened the set. Singer Randy Blythe got his wish for the encores by getting a massive circle pit on the go which lasted for three numbers.

Black Sabbath’s ‘War Pigs’ is blasted through the PA in homage to their fellow Birmingham rockers as Judas Priest come onto the stage behind a curtain which then unveils as the band blast into ‘Rapid Fire’ like a battering ram. 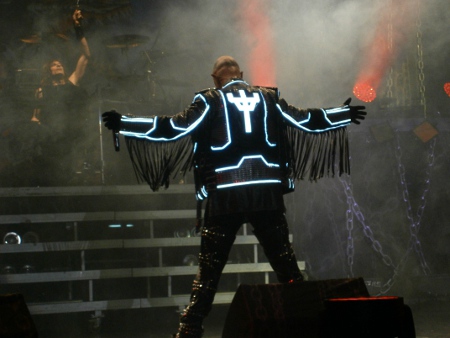 Priest are on top form from word go. Many eyes are on new boy Richie Faulkner who looks so comfortable in the band and more importantly seems to be enjoying himself with Glenn Tipton happy to let the youngster take the limelight out at the front of the stage. Later on in the gig Rob Halford and Faulkner five knuckle high five each other. You can’t get better approval than that than from the Metal God himself.

Halfway through the set a couple of jolly Singaporean lads shared their Bombay Dry Gin with me which gave me enough Dutch courage to Singapore Sling myself down to the front to join the other crazy hot and sweaty Heavy Metal maniacs for a night of unforgetable Metal. 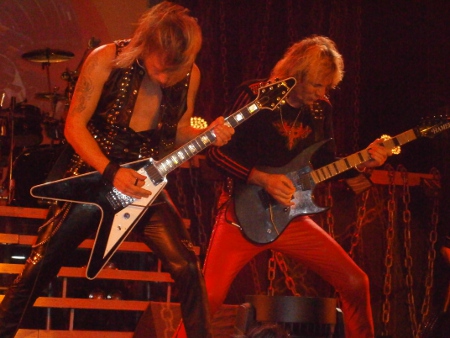 The set list included at least one track from every Halford era Priest album which included the rarely performed ‘Never Satisfied’ from the debut ‘Rocka Rolla’, ‘Starbreaker’ from ‘Sin After Sin’ and ‘Blood Red Skies’ from the Metal comeback album ‘Ram It Down’.

The crowd were lapping up this moment of Metal history here in Singapore with heads down classics like ‘Prophecy’ with Halford in a cloak, ‘Night Crawler’, ‘Turbo Lover’, ‘The Green Manalishi (With The Two Pronged Crown)’, ‘Breaking The Law’ where Halford lets the locals do the vocals and a brutal ‘Painkiller’. Priest also know how to balance a set out by including slow epic classics such as ‘Victim Of Changes’ and ‘Beyond The Realms Of Death’ where Halford’s vocals can pierce the eardrums. 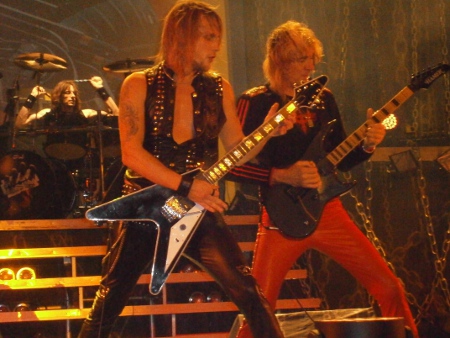 Rob Halford still has that scream and knows how to self mock himself too, looking like a camp Liberace in full S&M gear complete with a leather whip in his mouth astride the Harley Davidson for ‘Hell Bent For Leather’ and slowly pacing around the stage with a Metal cane walking stick towards the end of the gig.

Priest are the epitome of pantomime Metal and each member knows exactly where they should be on the stage at any given time and others can only marvel at this. Halford later adorns the Singaporen flag over his chest for some singalong with the fans. He then carefully lays it on the Harley for ‘You’ve Got Another Thing Comin” 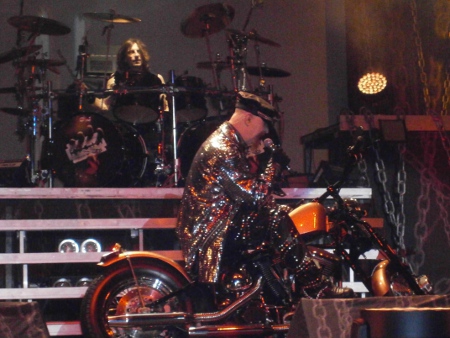 Judas Priest were superb tonight, a tight and powerful unit. In years to come when students do research on popular music of the previous century, in the text book under the heading Heavy Metal will only be three words – Judas Fucking Priest. 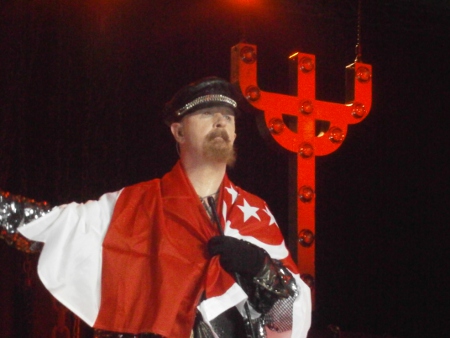 In Your Words
Redneck
Black Label 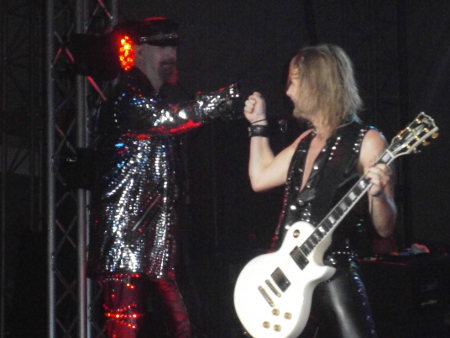 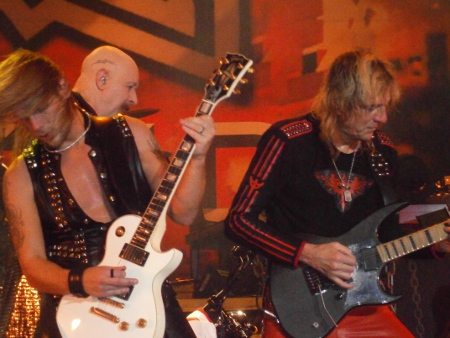 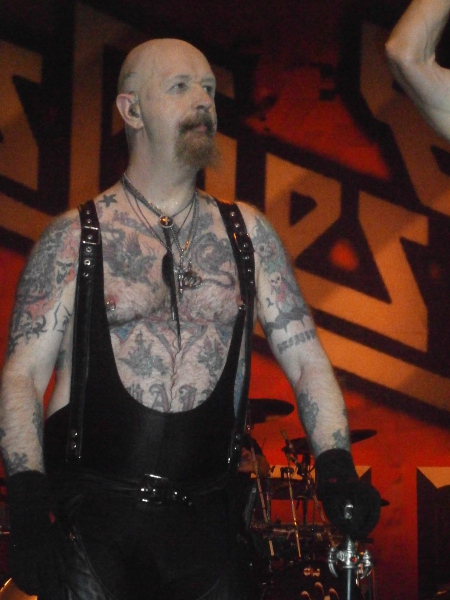