You might be of a superstitious persuasion and fond of a bit of Tasseology (that’s reading tea leaves to the rest of us) and believe the scatterings at the bottom of your mug roughly predict the future. In that case, I sincerely doubt a reading of “Joe Bonamassa will play to 1,700 cardboard cutouts as a result of a worldwide pandemic” was ever floating in the remnants of your drinking vessel.

But that is exactly what happened at Nashville’s Ryman Auditorium on 20 September of last year when the New York bluesman decided to premiere his new album Royal Tea via live stream. Although not the ideal way to flaunt your latest batch of tuneage, we all know Bonamassa is the purest of live animals and of a vintage where album sales do not balance the books.

So this medium, in the short term, has been his only source of proper promotion and concert revenue. And despite not being the norm, Bonamassa has still put together a magnificent product. The DVD kicks off with narration from Dumb And Dumber star Jeff Daniels, who gives a short synopsis of how this event came to be and includes behind the scenes footage of the recording of the Royal Tea album at the famous Abbey Road Studios.

Then it’s over to the hallowed ground of the Ryman Auditorium, where the main man gets down to business in front of his machine-cut audience for an eager version of When One Door Opens. To cull the awkwardness of a lack of crowd reaction, footage of applause from a selection of Bonamassa gigs cleverly fills the gap. And the first one up is an ecstatic audience from London’s Royal Albert Hall, which in normal circumstances would have been the perfect venue to blood these tracks given the album’s homage to British Blues music of the past.

It has to be said there is a sense of mass regret when watching this enthralling performance. With the always immaculately turned out Bonamassa backed up by a series of screened images, his uniformed backing singers Jade MacRae and Danielle De Andrea give their all through searing hot renditions of Royal Tea and Lookout Man.

It is understandable if you would think this performance is wasted on four walls. But this is your classic case of making the best of a bad situation, and after three or four songs, the absence of a crowd becomes irrelevant.

The Bernie Marsden co-written Why Does It Take So Long To Say Goodbye blossoms in its new surroundings with a long lingering solo overflowing with fervent intensity. That is followed by the sophisticated A Conversation With Alice, whose live impetus just makes it pip the monumental studio version.

It might be complete lunacy to even think this, let alone say it, but the haunting power delivered on Beyond The Silence is loaded with enough emotional grip to make the coldest of his cardboard patrons shudder.

His always shin kicking version of Rory Gallagher’s Cradle Rock shows why he’s one of the very few who can do justice to the County Donegal legend.

With 17 live albums in his arsenal, the genius of Joe Bonamassa continues to grow with each release.

His guitar prowess never ceases to amaze, his vocals are better than ever, and his all-round stage persona is a perfect match for his collection of sophisticated jackets.

And 17,000 viewing tickets sold just sums that up.

Now Serving Royal Tea Live From The Ryman is an engrossing and unique live event, but let’s hope it’s the last time he ever has to do anything like it again.

Royal Tea – Live From The Ryman

1. When One Door Opens

5. Why Does It Take So Long To Say Goodbye

6. A Conversation With Alice 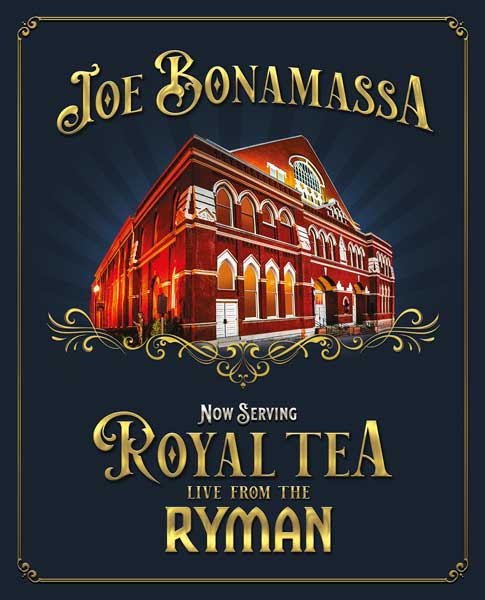 Previous article
In a world gone mad, we need Mr Bungle to provide the soundtrack
Next article
Album Of The Week: Doogie White is still fighting the fight