Guitar legend Joe Bonamassa has remixed and re-sung his debut album ‘A New day Yesterday’ as he celebrates the 20th anniversary of its release with a special edition, titled ‘A New Day Now’, set to be released 7 August via J&R Adventures.

While Bonamassa had been involved with music as a child, even opening for B. B. King at the age of 12, it was his debut release, ‘A New Day Yesterday’, which launched his stellar career.

The original album included six original tracks and six covers, while the new version now includes three extra tracks which were originally produced by Stevie Van Zandt. These three tracks are unreleased demos from a 1997 studio session recorded before Joe had a record deal and are a fascinating insight into where Joe was at that time and a guide to see how he has developed over the years.

That such an epic moment in history is recognised, is not at question and indeed it is fitting that the album has received some kind of subtle makeover. Joe tells : “The reason we went back and remixed it and re-sang it, and pulled from the original masters, was because I never felt like I deserved a guy like Tom Dowd to produce my first album.

“I was an infant as far as being an artist. Tom saw a little pebble in a stream, that could travel down and eventually become this nugget of gold, if you want to call it that, and he had a vision for me that I didn’t see. I appreciate that and I wanted to pay tribute to him as a man who mentored me through that time. I hope you guys enjoy it.”

Dowd was a recording engineer and producer for Atlantic Records and was credited with the innovation of the multi-track recording system.

Joe says “Tom Dowd was a master of everything he endeavoured on. There was no second rate, there was no compromise on quality of absolutions and results. I wasn’t developed enough as a musician myself to rise to his level.

“I certainly gave it my all and rose to the occasion grading on the curve of the musician I am today, the musician Tom always knew was inside my soul. I decided to enlist the help of another producer and mentor that has significantly impacted my life both on a personal basis and professionally, Mr. Kevin Shirley to help re-mix, re-sing and finally pay tribute to Tom as I tried to so hard to when he was alive.

“I have been extremely fortunate in my life to have been surrounded by two of the best most brilliant record producers anyone could have dreamed to be associated with. We included some crude demos and recordings I did at 75 Campbell Ave when I was just a teenager and alternate versions of songs you are familiar with partly because some of the master tapes have been lost.

“Yes, I did say tapes. It is never lost on me how lucky I have been and continue to be by your support over these past 20 years.

“Enjoy the trip down memory lane… I know I did.” 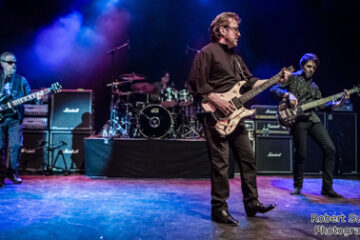